Among purple University of Washington Husky plushies and gigantic philosophy textbooks, a fifteen-year-old me found a grey book lying untouched in the ‘Languages’ section. Wiping off the dust and fungus growing from the ever constant Seattle drizzle, the words “Lithuanian for Beginners” peered through in bright yellow. I opened it and was transfixed by letters with tails and hats like ‘ą’ and ‘ē’, surprised by its fluid movement, and instantly grew a strange fascination with the Baltic nation a world away from the cliché University road trip my pubescent self was journeying on.

That was over seven years ago, and I never ended up applying to the University of Washington or becoming fluent in Lithuanian. Yet still, I saw myself sitting on a plane from Copenhagen to Kaunas, on the way to visit a roommate and let my inner fifteen year old indulge in a strange obsession. The plan: drive and see Lithuania and Latvia from the locals in ten days. Truthfully, my expectations of Lithuania were impressively underdeveloped. I had no idea what the countryside would look like, nor what its capital Vilnius would have to offer. Yet as with every trip I’ve been on, the less I expect beforehand, the more I enjoy and indulge in the inevitable surprises.

Having visited a majority of Western Europe in my three years studying in Denmark, I’ve really been stretching myself to explore anything East of Berlin. This has taken me to small Czech towns, to concrete pyramids in Albania, and azure lakes of Macedonia. But rarely do I think about traveling to the Baltic states. They seem so far away from Scandinavia, but are only an hour and a half-ish flight from Copenhagen. As well, I probably never would have made the journey unless one of my roommates from Lithuania wasn’t back home on an internship. Seeing this, as well as the opportunity to visit a bunch of other Lithuanian friends (Lithuanian’s are some the nicest and most abundant expats in Denmark), the trip would be the perfect way to see the country in a locals shoes.

I wasn’t sure what to expect, just that I would enjoy whatever was on its way. As we land, the first thing I notice is the abundance of verdant trees sprouting in every direction as far as the eye can see. I’m welcomed by my roommate Šarūnas, who’s internship just ended the day before and who hasn’t had a proper holiday in four months. Time to party. We’re both a wee bit peckish, so we head to a mall (of all places,) to grab some ‘local’ delicacies at a chain establishment called ‘Bernelių Užeiga’ which apparently means ‘Dude’s hang out’. Sounds good.

Doesn’t matter what it is or how much of whatever you order, it will contain the prodigal child gifted by Pachamama herself: the humble potato. Yet the Lithuanians don’t just boil or mash the sucker, they go full out and stuff it with meat and engorge it with sour cream and dill. This is called a ‘Zeppelin’…and it feels exactly like a lead balloon colliding with into your intestinal lining. The humanity. We by some Zeppelins, and some sort of shepherd’s pie without the green peas and carrots: just minced meat covered in potatoes roughly mashed and again drenched in ungodly amounts of sour cream and dill. But to prepare our appetites for these gut busters, we open with a bowl of ‘Šaltibarščiai’ to dampen our palettes and line our soon to be destroyed stomaches. Don’t be turned away by the number of hacheks in its name, it’s actually pretty good… and pretty damn good on a hot summer day. Pinker than pepto bismol (trust me, look it up), šaltibarščiai is roughly 1 part cold beet soup and 1 part kefir. Topped with, you guessed it, sour cream and dill. Of course, you get a plate of potatoes on the side to throw in with your pink soup. The šaltibarščiai alone was enough to knock me out for the afternoon, but then the Zeppelins came in for a landing and I was done for the week. I know I’m not necessarily painting a beautiful image of Lithuanian cuisine, but my mouth is inexplicably watering over the thought of cold beets, potatoes, and copious amounts of dill.

Reeling from the pain of purple soup and lead Zeppelins, I decided a slow walk would be the only way to cure the burn. We head into Kaunas for a wander through Šarūnas’ hometown, and I get a taste of Lithuania’s second biggest city. Let’s face it, Kaunas is cute.

It has a good vibe, and architecture that vaguely reminds me of Poland. There certainly isn’t the most to do, but it’s worth a wander to work of whatever meal you’ve just toiled through. 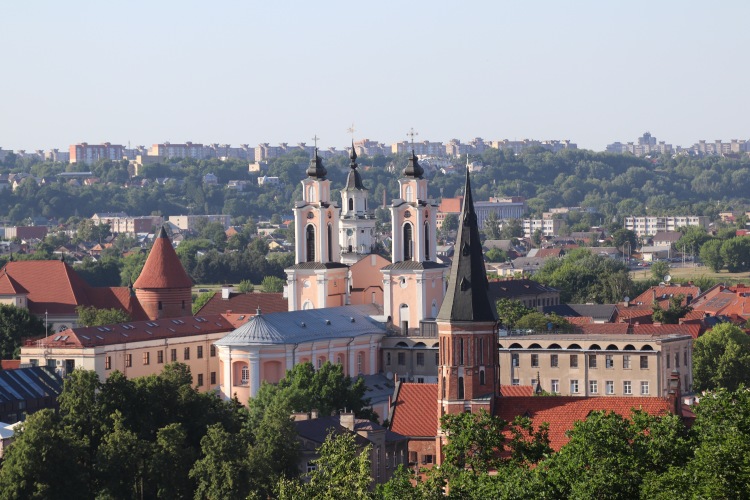 I learned quickly that Lithuania is filled with churches of all sects, and they’re all gorgeous. You won’t go wrong wandering into anyone you pick, but this is a good city to get lost in if you are the type of person that enjoys that, as I certainly am.

Along with churches, you’ll soon realize that Lithuania is covered in trees. Huge, never-ending, spooky-at-night forests of pine trees or any other tree that grows straight and is made of wood. It extremely refreshing coming from Denmark, a country that’s a bit lacking in forests and trees in my opinion. Happy with our walk and having sufficiently worked off our Zeppelins, we head to a nearby lake for a dip. Lithuania is hot and humid in the summer, more than one would think of the Baltics. It was roughly 30 Celsius, which is enough to melt someone coming out of a freezing winter. Because of this, lakes are the hip hangout spots in Lithuania. Come to think of it, I didn’t see anyone when we were walking around Kaunas. Turned out, the 300,000ish people were sitting by the same lake as me getting a tan until the wee hours of the midsummer sun. Incredibly crowded, but incredibly worth it, swimming at a lake in Lithuania in the summer heat just feels right.

You’re not allowed to drink in public in Lithuania, but that, of course, doesn’t stop Lithuanians from popping a lakeside beer. If I was extraordinarily wowed by the potatoes, the beer made up for it by completely blowing my expectations on the concept of beer. There’s good beer. Belgian beer is deep, and delicious. German beer is always crisp, and the concept of a ‘wegbier’ in taking a beer with you to the next bar is something I heavily subscribe to in everyday life. Czech’s have their dirt cheap deliciousness that drinks so easily yet tastes so sweet. Lithuanians on the other hand, have taken beer to extraordinary new levels of diversity. No two beers I had in my stay tasted exactly the same. Tired of Heineken and Budweiser? Come to Lithuania and indulge in the beers you never knew existed and never knew you wanted. Because they’re good, oh so good. I’ve had beers that taste like pine, like alien fruits, and had infamously green beers. But I’m sure we’ll get to that later. At that moment, all I had to do was let my inner fifteen-year-old enjoy warm lake water and the rhythm of the smooth Lithuanian language spoken in real life rather in a wet UW bookstore.