The chickens I had fed scraps to the night before had been working all hours to make breakfast for us. Fresh eggs are so extraordinarily underrated. How often do you get to hold a warm egg? These days there’s nothing that separates an egg in a supermarket from a packet of mushrooms, really. They both come in a box, and they’re both pretty lifeless by the time they make it to the aisles. So it’s nice to know where your eggs are coming from every once in a while and have them fresh as can be. Kal’s mother prepared some eggs, bread with jam, and reheated shashliks from last nights barbecue to fill our beer-soaked souls. I wish I could have spent more time learning some secret Latvian recipes from her, but it was time for everyone to get on the road. Our hosts were planning on biking around 6 hours north to the little town of Kuldīga… in humidity, through clouds of mosquitoes and without any water. It was nice knowing them.

We were planning on heading to Kuldīga too, although we were cheating by taking a mosquito free air-conditioned Ford. Perfect stop on route to the capital Rīga, Kuldīga offers a good look into smaller town Latvian life. Its patina-covered architecture and cute strolling streets make for a perfect road-weary stop. 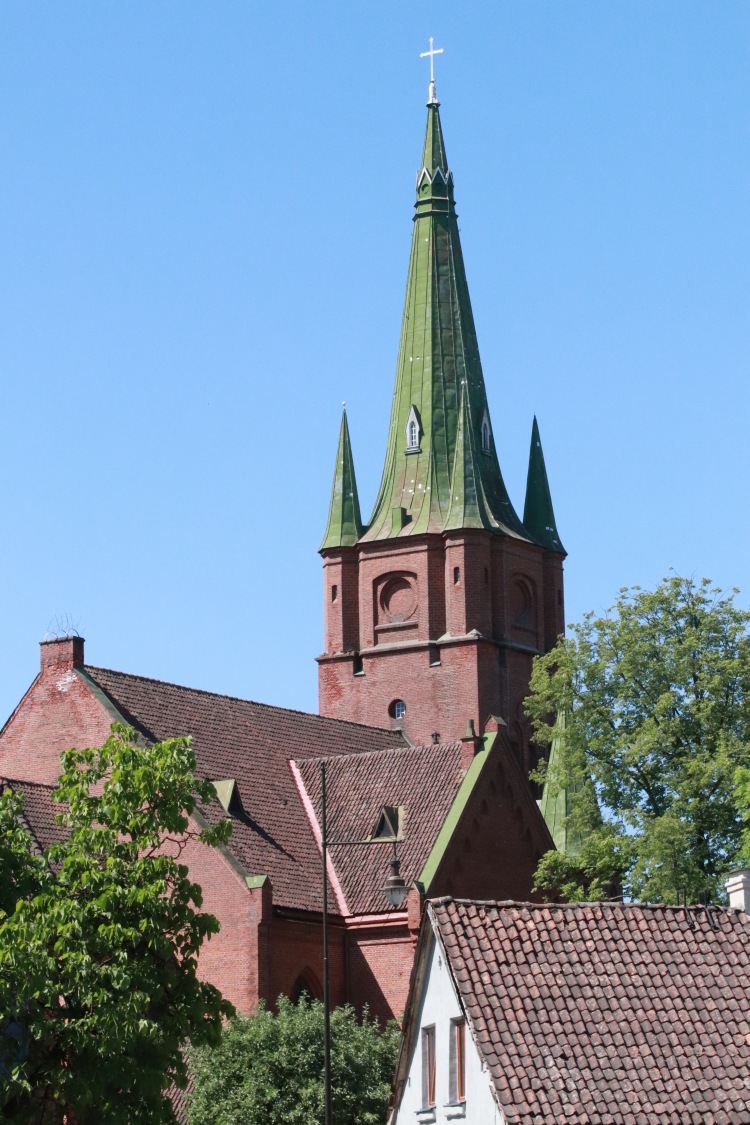 The town is famous in Latvia for having a waterfall, where people beat the heat and wet their feet. I’m not sure what I expected but it’s a pretty cute waterfall. Almost like a large scale version of those little water features they have at the doctor’s office. 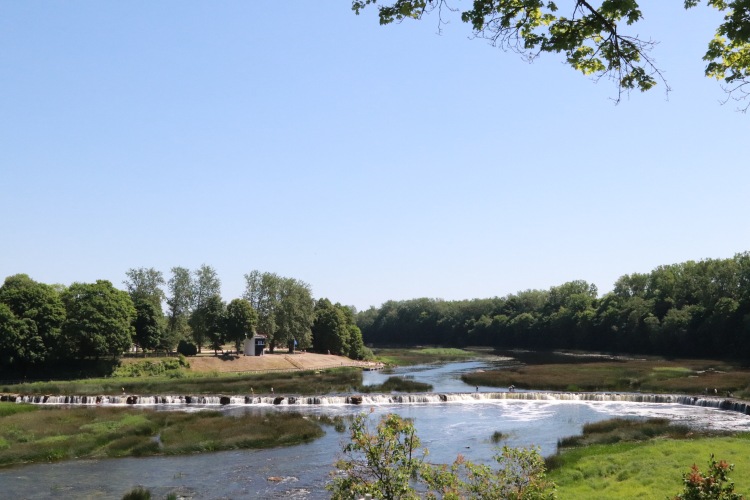 That’s a bit harsh, but it’s definitely lovely and worth a visit. The town was hosting a skate park competition, with hipsters, roller-bladers, and skaters alike showing up to participate and show off their chops.

We get back in the car and keep heading north to Rīga, but make a quick stop in the town of Jūrmala to see Latvian beach culture. Just about 40 minutes from Rīga, the beach town is covered in Russians, Latvians, and Lithuanians, enjoying actual warm water and sun. Since it’s on the Bay of Rīga, the water heats up a lot quicker than the Baltic Sea it feeds into. The offset is that the water is a little murky and muddy. But hey, it’s warm. We challenge some Lithuanians to a game of beach volleyball and lose pretty quickly. I’m 197cm, and Šarūnas is only a bit shorter but height doesn’t transfer into skill in my case. The first game was pretty bad, but we make up for our loses and almost take the win on the second game. I decide I’ll never make the Olympic team, and that it’s time to get to Rīga soon so we make the drive and get to our hostel just set a 10-minute walk from old town.

Finally having worked off our fresh egg breakfast, we make for Latvia’s answer to Golden Coral, called Loto. They’re all over the city and have different names, but I’m pretty sure they’re all owned by the same company. Buffet style and filled with Latvian delicacies, Loto is actually pretty decent. It’s made to look like a little country home and everyone working is in traditional Latvian garb as they ring up the price of your potatoes. It’s kitschy but cute and a good way to taste Latvian food. Rīga is surprisingly more expensive than I had anticipated. A full meal at Loto will set you back a good $8-10, and Loto is at the cheaper side of restaurants in the center of down. But of course that’s better than most other Western European countries, I guess I just expect everywhere East of Berlin to be dirt cheap. Latvian food isn’t much different from Lithuanian to a foreign observer. The classics are still present: beets, potatoes, dill, and sour cream. Can’t go wrong with those ingredients, which will inevitably make you uncomfortably full. I never learn from my food mistakes and eat way too much beet soup covered in that sweet sweet gooey sour cream. It feels so wrong but oh so good.

Full and happy, we walk through the old town. Rīga’s cute, there’s no getting around that. But my expectations for the city were sent so extraordinarily high by other travelers. It was hailed to me as a ‘New Prague’.

But its old town is filled with art-nouveau and cute little buildings that look straight out of a gingerbread house competition, definitely worth the exploration. It offers architecture similar to most other North European port cities, but Rīga has a much more sugar coated type of architecture compared to Amsterdam or Copenhagen. 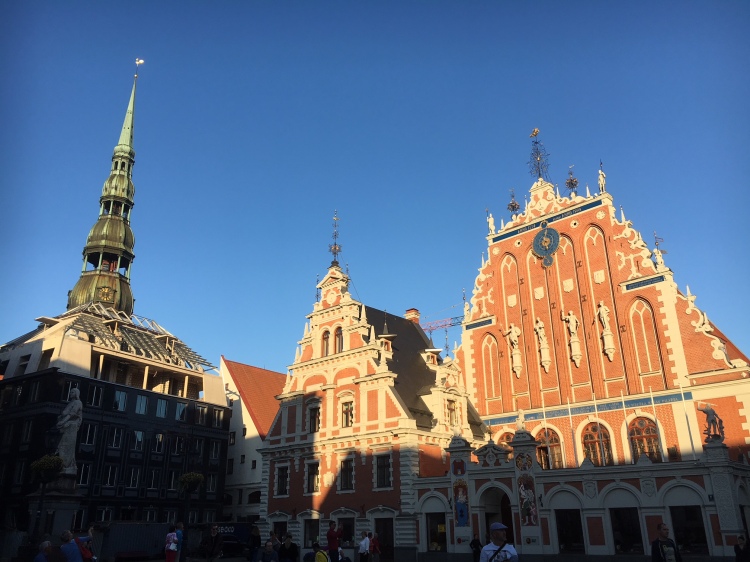 I have to apologize and say that I’m absolutely horrendous and taking photos in cities. The thought of it honestly makes me squirm a little bit. When I’m on a mountaintop, I feel like a National Geographic photographer about to see California Condor eggs miraculously hatch out of an Aztec ruin. Carrying a camera around a city makes me feel like another tourist photographing a building that’s had several thousand photos from every possible angle. Does that make me a bit of a snob? Perhaps. But if you’d like to see more photos of Rīga I may kindly direct you to Google images, for they have photos better than I could ever take.

Ramblings aside, Rīga is a cute town and if you are doing a trip around the Baltics it’s absolutely worth a visit. Couchsurfing is a great app for meeting up in the city, as you can just make a hangout and say you’re up for some beers on the app. Chances are, some other people also want some beers and you can start texting and pick a spot to hang out and share stores. We meet up with some couchsurfers from all over the world at a bar called ‘Lazy Fox’ (or something to do with an underperforming fox) which is apparently pretty big with tourists and courchsurfers as a hoard of drunk Brits talks football next to us. We get acquainted over some non-domestic markup beers (not my thing), and after a few we head down the street to a more local bar. Every level has a different kind of music, but it’s a wee bit too loud for conversation. So I grab a beer and make it back to the seat to yell a conversation at each other and hope its enough for them to hear me. I didn’t really know what beer I picked, I just pointed at a tap beer. I got about halfway through it before realizing it was a green beer…that tasted pretty damn good. Who knew?

I’ll be quick and give a few recommendations for Rīga. I’m the kind of city explorer that doesn’t like to have a direction and just gets lost or sits in parks and enjoys the vibe. There’s a street called ‘Miera iela’ that I had heard was a hipster dream. This was a little misleading, there’s not so much to do on the street. It’s nice, ya, you get out of the touristy old town and see something else. There’s a cute tea shop where you can pass the time with board games. My favorite bar and hang out spot is called ‘Kaņepes Kultūras Centrs’ or ‘Cannibis culture center’. I didn’t see much cannibis, but it is the local hang out for a lot of artists and weirdos. If you like cheap beer and artsy people smoking hand rolled cigarettes (that’s my kinda place), then add it to your to-do list, Martha. Other than that, if you’re in town wander and enjoy the candy coated buildings and Latvian people. They’re lovely.