It’s about 6 in the evening in Tbilisi, fresh off the train and we have to get to the Russian border by nightfall. Of course, had we arrived at 9 am we would have had an easy journey, but now everything is rather last minute. We look around the hectic marshrutka station for someone going to Stepantsminda (სტეფანწმინდა) (also known as Kazbegi) right up next to Russia. The marshrutka station is eclectic as buses don’t have too much organization and just park where there’s space. There’s a lot of them too, which makes the hunt difficult. We can’t find anything, but a taxi driver from Armenia gives us a decent price so we take it. It’s late, and we figure all the marshrutkas have left. The drive takes around four hours through the stunning Georgian military road, weaving through soaring peaks and shepherds herding their flocks. We make it a little after nine, to the mildly touristy town. It’s dark and we haven’t had a meal in a day, so we wander around but no one seems to have an open kitchen. So we buy some bread and sunflower seeds and settle into a bar for a beer. We also have our first shot of chacha since the airport shuttle driver gave us some of his homebrew. Chacha is the leftovers of winemaking, and locals make a concoction reminiscent of vodka that’ll probably make you blind if you have too much. It’s cozy, and at about midnight we head to the hostel on the outskirts of town to settle into bed. It’s a chill place, with hammocks and seating area around a fire. We booked a little private shed with a bed in it for an awesome price, so we’re pretty happy. We arrive to see some Russians sitting around a boombox having a little party.

“My friends! No speaking English good, but come chacha!” One of them shouts as we enter. Can’t pass up that opportunity. They’re three Russians on a road trip to who knows where, and they’re extremely friendly despite no speaking English good. They regale us with tales of surviving in Russia, mostly by using Google translate on our phones. Chacha flows with the time, and three hours later the chacha finally hits all at once. Luckily the Georgians love sparkling waters packed with minerals that are fantastic hangover killers, so I chug a bottle or burning bubbles before stumbling into bed.

The next day I wake about 7 and stumble out to this. 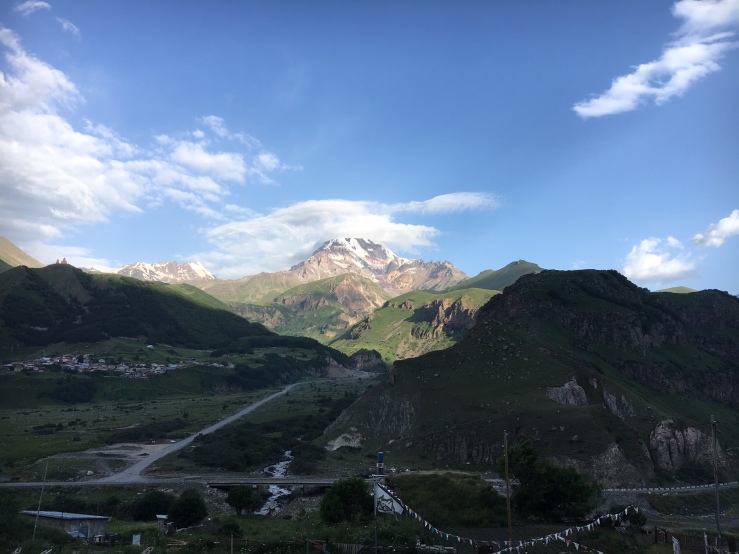 We arrived so late that we haven’t gotten a proper look at the surroundings. It’s immensely beautiful. My head hurts, but who cares when you have a view like that. Our little cottage looks great, and we hydrate a bit and chill in the hammocks. 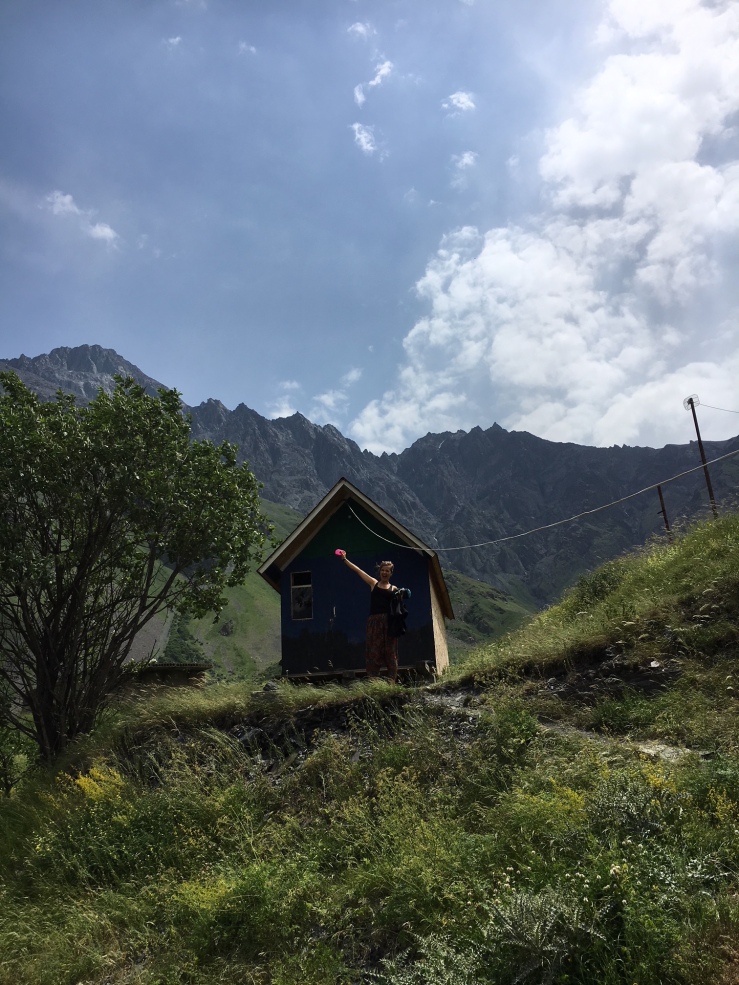 We have what I call a “Colorado hang-over cure”, where you hike and grab a beer on the way down. That little church in the middle left side of the photo is our destination. The hike is straight up hill, and Ivana had a bit too much chacha last night for it to be an enjoyable walk. 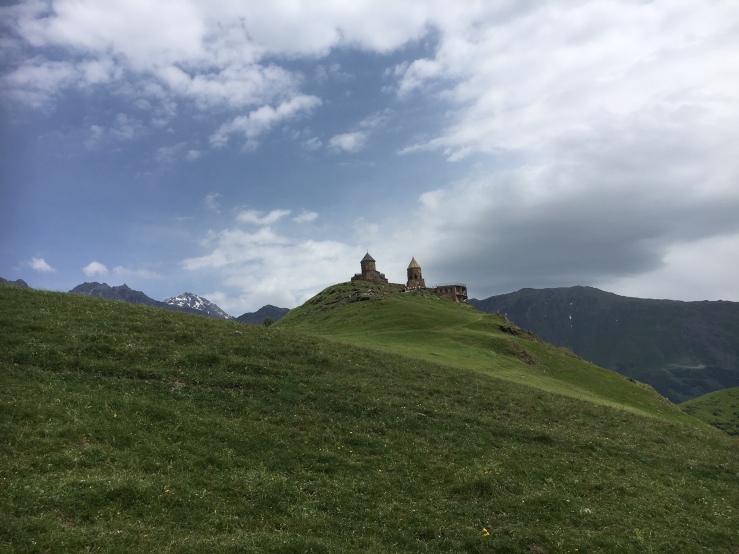 It takes a little while but we finally make it up to the top, where a bunch of taxis and tourists kind or ruin the mystical hike up. But it’s still a good spot, and we stop for a picnic. 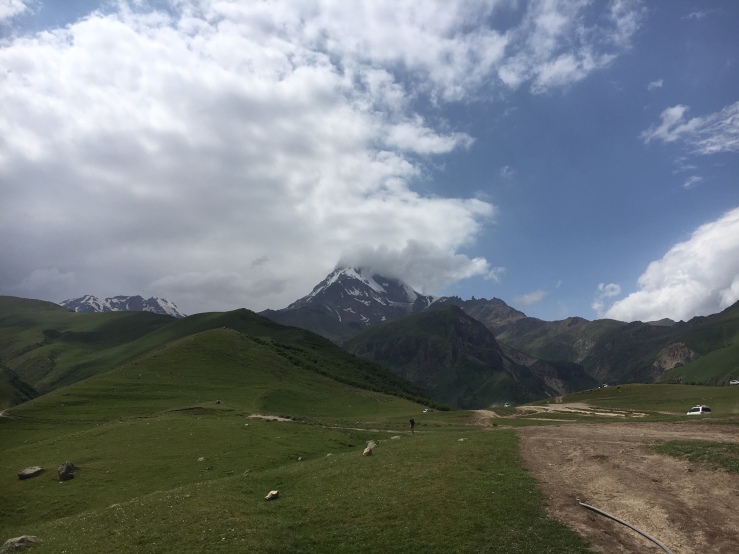 Little did I know, we were being hunted. A sneaky heifir approaches.

Not today, Bessy. Those cucumbers are mine. I shoo it off and then take a billion cow photos.

Who could be mad at those flawless eyelashes? Not I. We wander into the church, through crowds of tourists. Inside a mass is going on in candlelight, and it feels like a legitimate experience as priests chant as candlelight dances over faces of saints. Priests in Georgian Orthodox churches are really attentive. In Western churches, I never see priests just walking around and talking to people. They’re always off somewhere doing priest things. But here, priests are out walking about, talking to people and cracking jokes. I appreciate how open they are. They also have beautiful beards.

Photo cred to Ivana. This one’s just enjoying the perfect view. The church is beautiful, and the views in every direction are equally stunning. 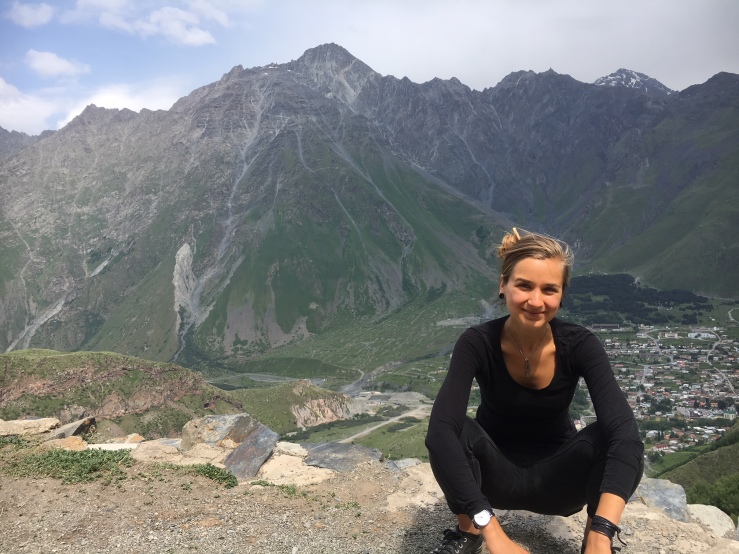 We head back down the craggy hill and relax a while, watching the mountains. I’ve missed them so much after spending so much time in Denmark, otherwise known as the flattest country in the world. Being in the mountains constantly reminds me how much I need to live in a place with more altitude.

Everytime I look up, the view gets more dramatic.

We were initially planning on going to Armenia after this stop. But Yerevan is a solid 6:30 hours on marshrutka from Tbilisi, and there’s just too much to see and do in Armenia for us to be able to give it justice in our given time frame. So, we replan and play it by ear. There’s a little town just 20 minutes outside Tbilisi called Mtskheta (მცხეთა) (pronounced M-t-s-HEh-ta, with a proper throat clearing HEh). It was once the capital long long ago, and thus houses a monumental cathedral to oogle at. 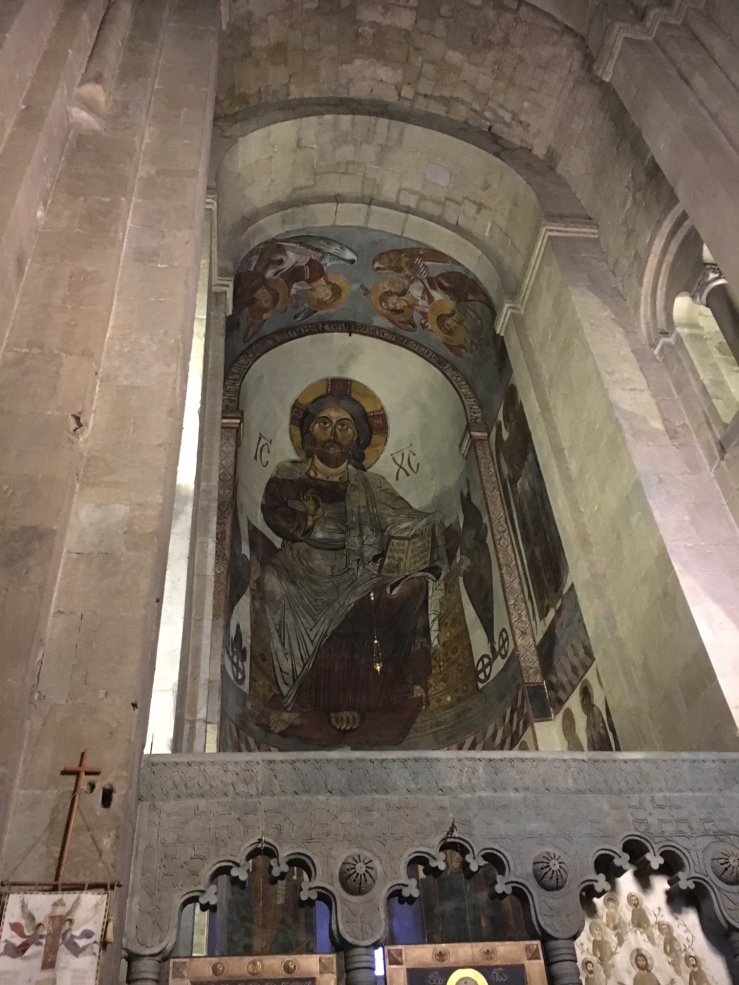 Other than the church, there isn’t too much to say about the town. It’s certainly cute but not much more than that. I’ve been thinking a lot about the people here, and what it is that makes them special. They’re easy to smile, welcoming, and extraordinarily confident in themselves. All the Georgian youth I’ve met have been so interesting, and they all work really insane personalities. It’s amazing to me that Georgia doesn’t receive so much hype in other places. It’s certainly cheaper, cleaner, friendlier, and dare I say prettier than many Western European spots. So it’s amazing that there still aren’t so many tourists. But that of course, is probably a good thing. I’ve been wondering what travelers can offer the locals. Travel and tourism are inherently privileged activities. Especially here, where everything for Westerners is so extremely cheap while locals can struggle to survive. I think for some, it’s just enough to meet and talk with foreigners. A lot of Georgia’s youngin’s have been so welcoming and curious about our lives and so willing to share their world with us. I suppose it’s the same when I meet tourists in my home. Often times, just hearing their story is enough to make me happy. But everyone here is willing to give you a smile, especially when you say hello in Georgian (gamarjoba). They seem genuinely happy to see tourists here, and willing to share their world with those that choose to come to share it with them. In Morocco, for example, it often feels like every tourist is looked at like a walking wallet. Here, it feels like they just want to make us fall in love with the Georgia they live. Is that an adequate exchange for the locals? To simply enjoy oneself, say hello and cheers once in a while, and smile back? Hard to say.

1 thought on “Sneaky Cows in Kazbegi”