My trip to Brunei was the perfect introduction to Borneo. I polished up my basic Malay a bit, got acquainted with the way of life and some of the Muslim values, and got excited to see much much more of this beautiful island. Unfortunately, these weekend rambles don’t allow for enough time, so I have to be on a more tight schedule than I would prefer. I promptly got on the Royal Brunei flight back to Kota Kinabalu in the afternoon.

Getting downtown, I got to the Filipino market just in time for the famous Borneo sunset.

Maybe it was just a sunset, but for these Chinese tourists, it was something special.

I decided that I’m more interested in taking photos of people taking photos. If there are so many people taking a photo of one thing, what’s the point of taking more? I can capture the ridiculousness of mass photo taking and then enjoy the moment. Or maybe I’ll take just one… 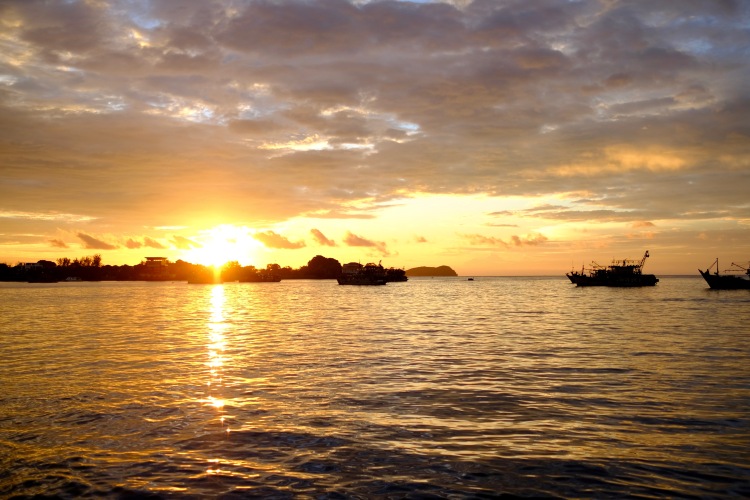 The Filipino market is a good place to grab a meal of fresh fish. The fish market is pretty brutal, but also pretty enticing.

Of course, the locals are just as friendly in Malaysia as they were in Brunei. 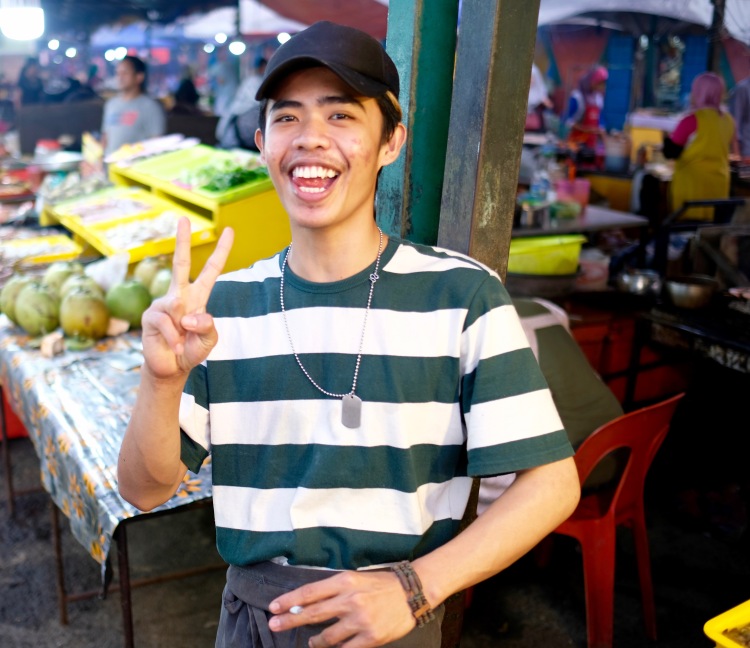 While I can drink in Malaysia, the effects with my malaria pills aren’t the best, so I decide to walk through the mall instead of hit the bar. I tentatively wanted to go see Bohemian Rhapsody, so I went and looked up the prices. When I saw that a showing was playing in thirty minutes and only cost MY$13 (US$3.10), I couldn’t say no.

Besides Rami Malek’s excellent acting and the intrinsically fascinating life of Freddie Mercury, the most interesting aspect of this film was the removal of any explicitly homosexual scenes. I was just thinking the whole film “…why hasn’t Freddie smooched a dude yet??”

But in a strongly Muslim country, I can understand why that would be a bit taboo. Homosexual acts are still illegal in Malaysia, even though the tides are turning a bit. I’ve seen plenty of trans individuals in my time in Kuala Lumpur and Borneo, so I believe things to be changing. But still, it was an interesting moment in the movie. Even Paul putting his hand on Freddie’s shoulder created some gasps of disapproval. They may have also edited the heterosexual sex scenes, but I haven’t seen the unedited version yet to verify.

The next day was the only day where I could sleep in, so I did until the ripe hour of 9. I had no idea what to do, so I rented a car.

My plan for the day was to see Mt. Kinabalu, the symbol of this part of Borneo. Tours were all expensive, and taxi’s were difficult to find and not affordable. So I rented a car from Borneo Kinabalu Elegant Tours, who were closed on Sunday but still rented me the car. To rent the car cost about US$30, much more than I wanted to spend but still $20 cheaper than a tour and $10 cheaper than a taxi. And I got to have a little Borneo roadtrip!

The drive went for about 2 hours through windy roads and little villages. To my dismay, the mountain was shy and enshrouded in clouds. 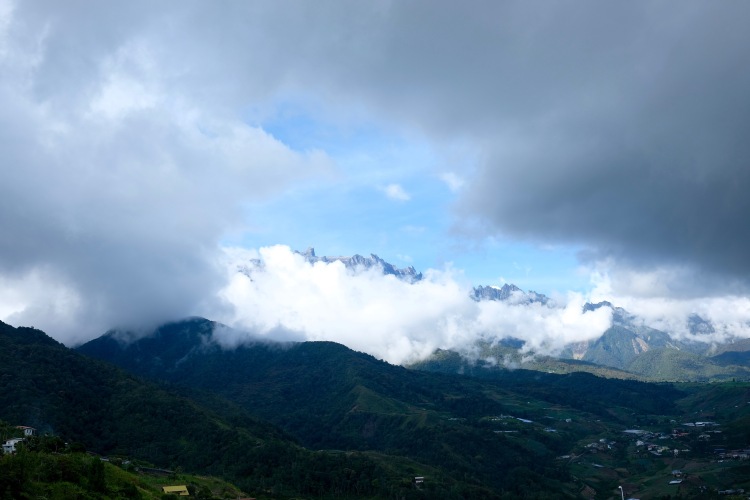 I went to the Botanical Gardens inside the state park, in hopes to see blooming rainforest flowers. ‘Twas not the season for anything but this pink flower that grows year round.

Pretty, yes, but I had the hopes to see a Rafflesia, the bizarre flower of Borneo. In general, I didn’t see any of the things I had set out to do. But at least I got to have a Borneo road trip, right?

The next day was an early rise for my 7:00 am flight to Sandakan on the East coast of Borneo.

And finally: the shy mountain decided to show itself.

Right out of the airport, I hopped in a Grab (South East Asia’s version of Lyft. Very necessary!) to take me to the Sepilok Orangutan Rehabilitation Center. This is the largest non-enclosed Orangutan sanctuary in Borneo, allowing for visitors to be right in the midst of an Orangutan’s habitat. But first I wanted to visit the Sun Bear Rehabilitation Center right next door.

Sun Bear’s are poached for their bile (used in Chinese medicine, of course…) and kept as illegal pets. For those bears that are orphaned or saved, they get sent here to learn how to forage, climb, and socialize with other bears before being released back into the wild. All the staff members were extremely knowledgeable and friendly, and the rehabilitation center genuinely seemed to have the best interest in mind for the bears. Only a small amount of the sanctuary is open for public viewing, and the rest is just forest for the bears to roam around freely. It’s excellent! 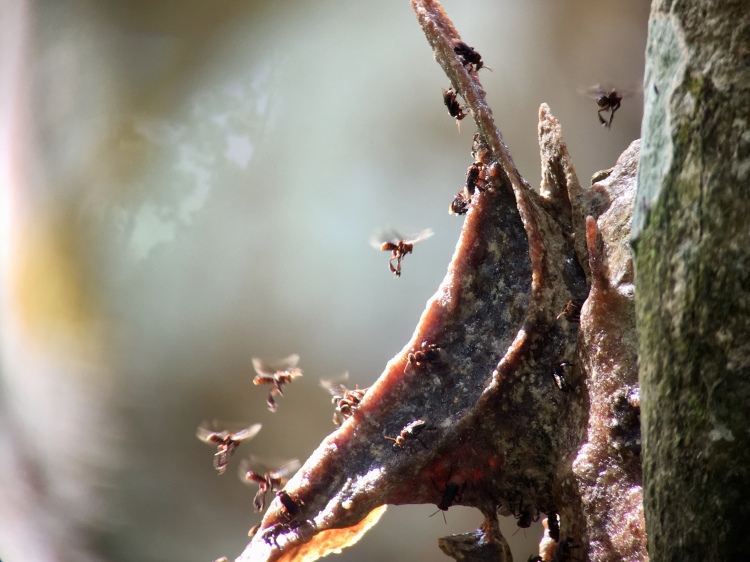 These are stingless bees, a favorite snack for the bears.

Next I popped into the Orangutan center but missed feeding time so I only saw one Orangutan munching on bananas and messing with a macaque that was trying to steal its food. It’s amazing how they notice us, or more so examine us. They can react to our emotional responses in ways many animals can’t. 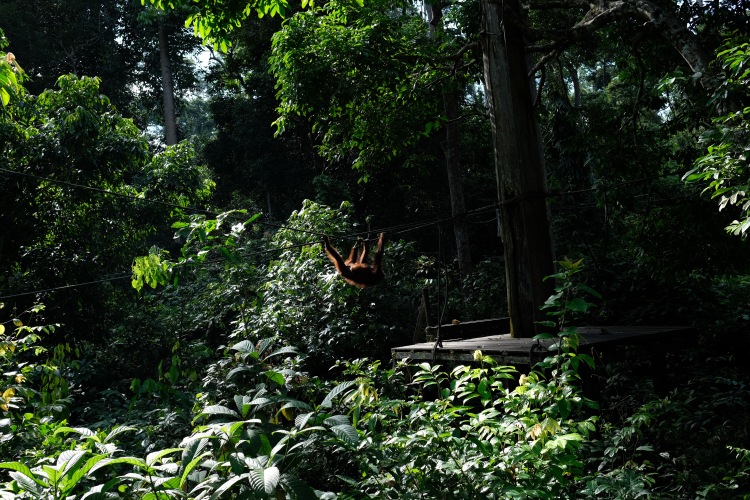 I struck a deal up with my Grab driver, who was nice enough to give me a good price for a days worth of driving. We went to the Labuk Bay Proboscis Monkey Sanctuary, a thirty-minute drive on some bumpy roads. This was the most expensive reserve to enter, about $16, and the one I liked least. While the Orangutan and Sun Bear sanctuaries had the animals best interest in mind, this was completely a tourist experience. I also don’t like monkeys (I know, it’s an unpopular opinion). I think they’re greedy, mean, and they just gross me out. But I’ve never seen Proboscis Monkeys before, so it was a worthwhile journey just to see them.

While the Sun Bears were fed fruits to help them learn to scavenge and the Orangutan’s were given healthy fruits and vegetables, the Proboscis monkeys just got bread and zucchini. Whenever an animal is fed grain, it becomes a zoo. They only use bread to get them addicted, and that’s exactly what these monkeys were. Everything was a fight, and everything was dramatic. Their big noses make them create honking sounds too, which means the fights are pretty hilarious to watch. I was just thinking, “how did nature allow this?”

But of course, I’m glad I saw them, and they are a beautiful part of this planet’s ecosystem…but I still don’t like monkeys.

My driver wanted to take me on a big tour, but I had to stop him because I was running out of money. So he took me back to the Orangutans and Sun Bears, where I sat and watched for hours. 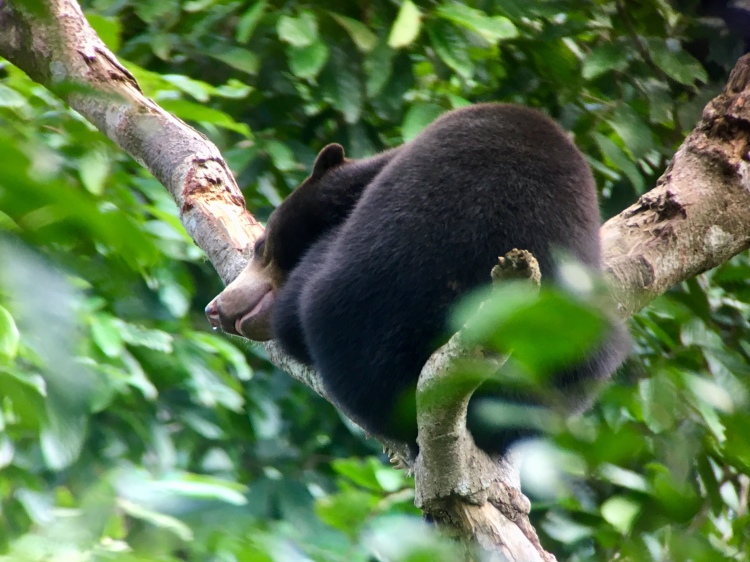 This time was much better than in the morning. I got to see the Sun Bear feeding, which was fascinating to watch them forage and dig to find hidden melons and coconuts. The Orangutans were just as fascinating. I went for feeding to watch a mother and her baby eat, and watched for about twenty minutes. When I decided I was ready to go, the staff of the sanctuary all got a worried looked and in a hushed screamed commanded “Everybody move now! An alpha male is coming and he’s chasing a female!” With that, we hurriedly shuffled away towards a safe distance. Apparently, the males can charge at nothing…and this was no male I would want to be charged by. It was gigantic. Eventually, it just wanted some bananas, but it was definitely making sure we knew he was the alpha. His eyes had that “Don’t mess with me” look.

But perhaps I like watching people just as much as I do gigantic Orangutan’s. 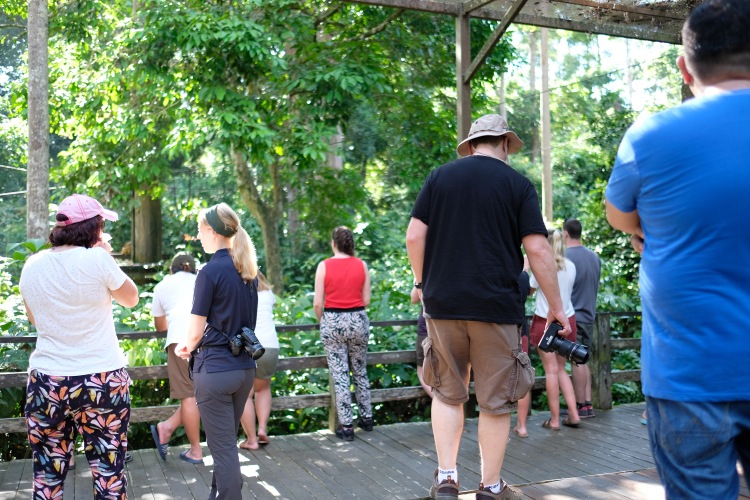 Borneo was perhaps the highlight of my Asian journey’s these past months. Of course, I did not stay long enough. But it was enough to know that I could come back, and engrain myself more in the nature and people of this beautiful part of the world. 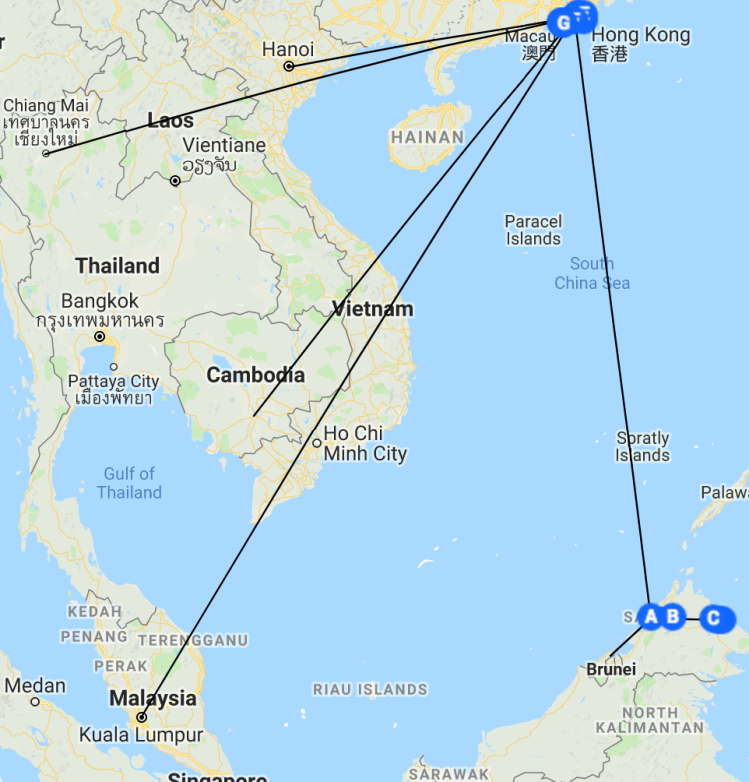 Thank you for reading! As always, let me know what you liked and what I could improve on. See you soon!

One thought on “Bears, Monkeys, the Borneo Basics”