It’s become a tradition that I reach a state of inebriation beyond all human possibility every time I pass through the Belgian border. On my last visit in Leuven, an American Anheuser-Busch exec covered my drinks and lubricated me to the point of no return while I daftly debated European politics in French with two Gypsies that later stole half the bars coats. I expected no less from my trip to Mons, a lesser-known city in the French-speaking half of Belgium, Wallonia.

Wallonia isn’t known for much, aside from the terribly named “Brussels South Airport” (which is nowhere near Brussels in any respect), and the highest crime rate in Belgium centered around the Pittsburgh-esque main city of Charleroi. Mons, however, is quite a treat. I arrived late at night but in good time to enjoy a lively square filled with cherry cheeked locals drinking warm wine under the Christmas lights.

After a cheap steak-frite, I wandered around the small streets. Mons, meaning mountain, would perhaps benefit by being renamed ‘Hill’. There are no mountains to speak of until reaching the Alps. Names aside, Mons was the cultural capital of Europe in 2014, giving the city a certain bougieness that is still rubbing off of the gentrified buildings and hipster cafes. I liked the city, it was adorable for a night stroll but anything more may cause insanity. It was time for me to find my destiny.

I wandered and wandered, finding no bars suitable for an outcast like me. It was, after all, a Wednesday night in a small Belgian town. After consulting Google with the often-used question “Cheap Beer”, I was presented with a student bar. Perfect. I’ve only been a free man for a few months, I can fit in with the kids. The bar was located on the outskirts of the town, in the basement of the residential hall for the local Polytechnic University. A location one would have absolutely zero chance of finding without having the bravery to break into a student’s residence hall. Was I even allowed to be in there? Who cares.

The bar was small, filled with cherubim faced engineers getting a nice buzz before doing their homework. I went to the bar and asked for a beer. When the bartender asked for 0.80 in return, I knew I had found my fate. The bar the prophecies had foretold. The location of my damnation. I bow to thee, Polytechnic University Student Bar.

The bartender and I hit it off, and I was soon invited to a drinking game with his friends. All of them were serious engineers and serious drinkers. One of my new drinking friends, a man skinny as a rail and pale as a notebook, is the two-time beer drinking champion of Mons, holding the record for drinking fifteen beers in thirty seconds. The rest were burly Belgian boys, master drinkers like the monks that have forged tirelessly day and night to make the best beers in the world for millennia.

The first game was a simple one that I can never remember the name of. That one where you remember your four cards and turn the others into a pyramid. If your card comes up you tell someone to drink, and they can either challenge you or take the drink. As the fresh meat, I ended up being the target for a good half of the cards drawn. No problem: I graduated from a Danish University. I have a minor in beer shlauging. 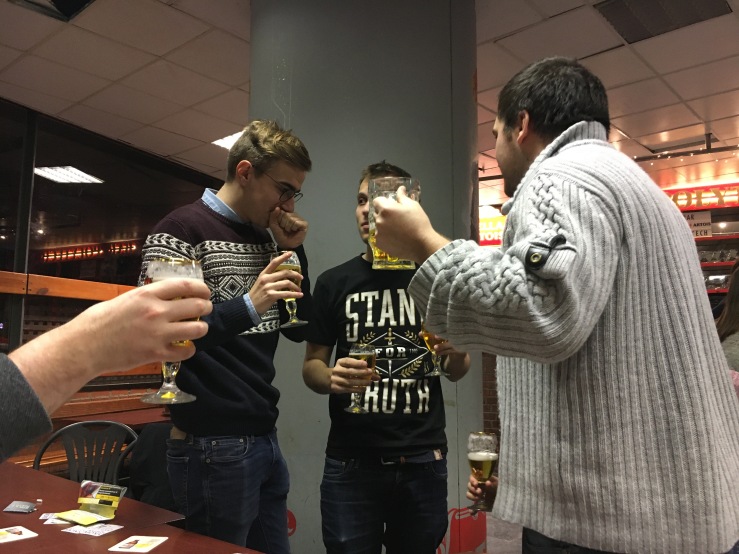 It was at this point, after being made to chug my first beer, that my new friends told me that they paid for this keg with money the earned at a fundraiser and that all of my beers for the night would be free. Oh Dionysus, great creator debauchery and defiler of all manly desires in exchange for legendary parties, I pray to you so rarely yet you always shine your beer glass tinted light upon me when I pass into this cherished land. May your wine-stained smile shine upon this land for centuries to come.

These boys welcomed me into their hearts almost instantly. The beer-drinking champion told me of a French traveler he found on the street. He invited the Frenchman to the bar and to stay with him in his dorm, and after to beers the Frenchman passed out and deposited his beer back upon the kind Belgians dorm. I told him I was no Frenchman, and to that, we said “Santé” and drank another. Two hours eroded, too many beers were drunk, one man helicoptered his hilariously gigantic gentleman sausage, and many memories were made only to be forgotten. As a tangible memory, the boys signed a card in a deck with the University’s logo emblazoned on the box. At this point, the night got a bit fuzzy but I somehow woke up in my hostel bed with all of my belongings and one of the top-five worst hangovers in history. If you venture to Mons and decide to explore the possibilities of the Polytec bar, venture with caution and a strong meal of fries and cheese in your belly before entering.

With the queasiness of a baby fresh after feeding, I boarded a train to Charleroi to meet a very amused Ivana who loves poking fun at me hungover. In Charleroi, I found a Chinese restaurant that made a healing noodle soup broth that healed me back to full strength, and we were off on a plane to meet our friends in Vilnius to drink once again. This would be a long week for the strongest liver East of the Mississippi. 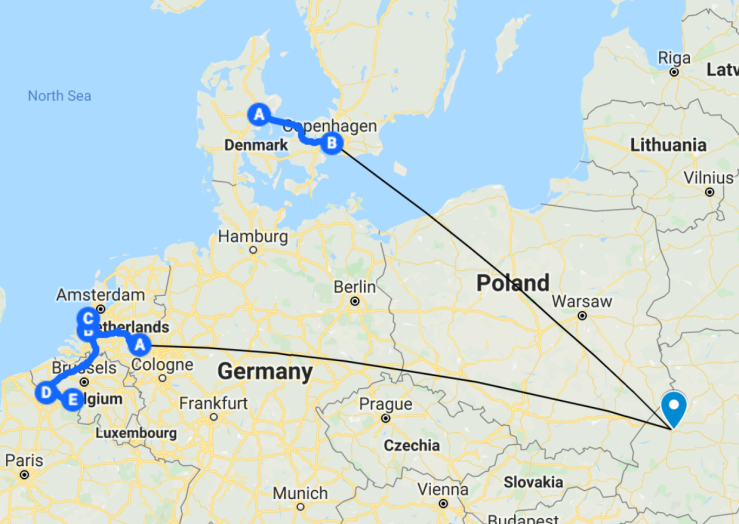