Guys, I’m tired. I haven’t had more than a bus seat and a cold floor to sleep on for two nights, and I haven’t showered in three. It’s pretty great, honestly. Something about being tired and stinky has a nice charm to it, especially when you spend a semester showering and sleeping eight hours a day. It’s a nice way to remember how lucky I am to have a bed and a hot shower to go to every night. With this in mind, we hop off the Wizz air flight from Vilnius and step into the 90+ degree inferno of Kutaisi (ქუთაისი). I’m going to include the Georgian translations for things here, not because I know how to pronounce it or anything but because I think it’s one of the pretties alphabets I’ve seen. Ivana says it looks like butterflies, and I say it’s like grape vines. Either way, it’s an airy way to write any language.

It’s hot here, hot I haven’t felt since I was back in Denver last summer. But regardless we get on a little mini-van bus into the city, as the driver drives at ungodly speeds avoiding cows and pedestrians. The Russian woman in the front seat keeps gasping in disgust and fright, to which he daintily pats her knee as if to say “I got this, darling”. We get to the city, a bit overwhelmed by the heat and language and difference of everything. One of the reasons why Eastern Europe is so fascinating to me is because of its extreme difference to my own culture. I feel much more at ease in Asian countries than I do in Poland or Lithuania. Perhaps this is because of all the Vietnamese or Korean or Japanese culture I was exposed to as a child, compared to the nonexistent Eastern European culture I had access to growing up. Either way, being in these countries is usually a real culture shock for me which I don’t experience often anymore. Coming to grips with this, Ivana and I begin wandering the city to see what it offers. There’s a huge fresh foods market, which we stroll around to buy tomatoes and cucumbers and fruits. A woman hassles us to try some walnuts covered in fruit syrup. I’ve had them before in Turkey, so we say we want a couple. She responds by filling the entire bag full, to which we take out three and say that the three we are holding will be plenty. She gets mad and asks for six lari, about two and a half dollars. I know this is far too much and give her a price of 3 lari. She gets extremely mad and starts yelling, to which I give in and giver her a 10. She doesn’t have four lari hanging around, so she has to give me five back. This makes her even more angry, and I’m sure she gave us plenty of Georgian curses and swears upon all of my future children. But I’m pretty happy, I only had to pay five lari. We get to a park and start eating, and find our walnuts filled with mold, and the ones not covered in mold are too hard to eat. Shame, I should have given her even less.

I know they look like dripping intestines or a sex toy, but they’re pretty tasty when not filled with mold. After our snack, we hike up to Bagrati Cathedral and stumble in on a baptism. The priest is speaking at speeds faster than the speed of light, and the baby wails as cold water is dribbled on his head. His family members are all smiling in happy, as the baby screams in confusion. It’s a strange sight, but it’s good to see some culture. Bagrati was built in the 11th century, and features some really amazing carvings from the era.

It’s also a good place to grab some shade and look at the city. It’s getting late, and the heat is getting to us so we head back into the city to wander around the Jewish quarter, which has some great buildings in it. 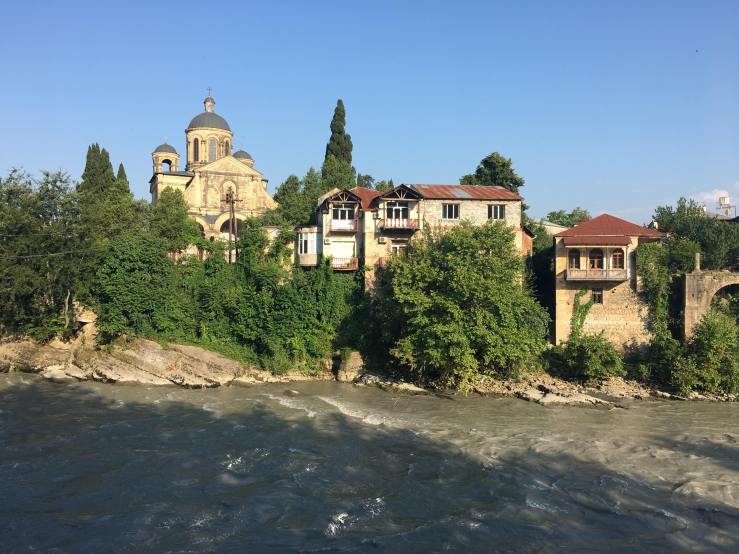 After wander for an hour or so, I decide I can’t put up with my hunger and I had to eat. I had heard so much about Georgian food is famous all over Eastern Europe, so I was trying to save myself and my hunger as long as possible before devouring a mass amount of Georgian food. We stop at a restaurant called Prague bar, and I get the two dishes I’ve been looking forward to most: Shashliks and Khinkali.

Shashliks are pretty simple, and I had my first batch in Latvia with our couchsurfing host (check out my earlier post), but it’s even better in Georgia. Ivana is a vegan, so she ordered the little plate of marinated carrots and eggplants and a delicious smoosh of spinach, onions, dill, and spices. It’s a pretty delicious vegetarian option. Now I want to get to the Khinkali’s…the oh so amazing Khinkali. I’m going to New York this summer, and one of the things I’m looking forward to most is the Taiwanese soup dumplings. This is Georgia’s answer. Gigantic soupy balls of love are twisted so delicately to make a dumpling of culinary perfection. It’s extremely messy but so so good. I eat ten without blinking, and could probably eat more if you put some in front of me. It was so worth the wait. We sit and enjoy the finally cool weather, sharing a beer and watching the world cup. Our host at the guesthouse we’re staying in offers us a bottle of his homemade wine, to which we cannot deny and thus talk with him for an hour or so in Russian about Georgian sights and life. He’s a nice guy, but we have to talk through Ivana if we want to as something to the other. The wine is good and strong, and we head in for a knockout of a nights sleep.

Two days of no sleep add up, as the next morning we look at our phones….and it’s three o’clock. Sleep well deserved. It’s also shaping up to be 100 degrees today, so a siesta into mid-afternoon doesn’t sound like a bad plan. Breakfast is a khachapuri, had at a cafe in the central park of Kutaisi. It’s like a pizza, just with no toppings and filled with cheese. Salty, Georgian cheese on crispy bread is a good four o’clock breakfast.

Even though its 100 degrees today, there’s a warm breeze that makes it feel a lot cooler than yesterday. That’s pretty lucky for us because we’re still both getting used to the heat. After my khachapuri snack we head back to the market for some fresh veggies to fill Ivana’s vegan soul. Mounds of perfectly fresh cucumbers, tomatoes, apricots, walnuts, all for about 2 bucks.

Today feels far less overwhelming than yesterday. Maybe it’s because I’ve finally slept, but all of this market hustle doesn’t have as much bustle. It’s good to feel like I’m adjusting a bit to this environment, and hopefully, I can get a bit more to terms with it. My Georgian language is extended to hello (gamarjoba), thank you (modloba), delicious (gamrielia), and beer (ludi)…and that’s about it. It’s a tough language, and nobody here except for young waiters speaks any English. With fresh veggies, we head to the botanic gardens to savour our fresh produce delights.

Pretty exotic and offering some shade from the heat, the botanic gardens is a great picnic spot.

We then head back and wander around the city, stopping into a garden restaurant with a good view of some graffiti. Some armored cars pass by, and it reminds me that theres an ongoing conflict occuring with Russia…but then again most countries have some sort of security control rolling through the city. When I was in Lithuania, there was a gigantic fleet of Polish troops coming in due to a NATO training event. It’s commonplace, but it’s still a little eye-opening. 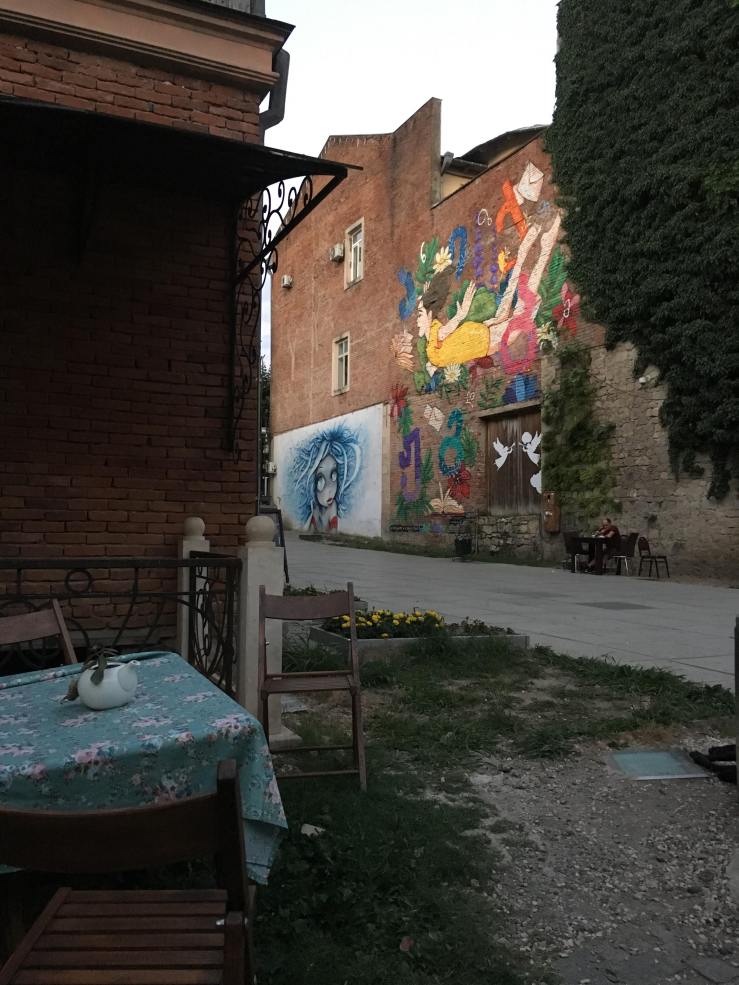 We stop in for some mighty fancy tasting pickles and a dumpling soup that kind of tastes like sick person soup. But not in a bad way…the kind of sick person that your mom makes when you have a cold that warms your soul a little bit. It’s a good kind of sick person food, and I eat every last drop.

The power goes out for about 30 minutes in the entire city, so this soup picture is taken by romantic candlelight.

Neither of us is really tired, but a day of endless wandering is exactly what we needed for our travel-weary souls. Tomorrow we’re heading to Tbilisi, which we be a (hopefully) three hour trip via a Soviet mini-van. It’s also shaping up to be 100+ degrees for the next few days in Tbilisi, which should prove to turn us into soup.