Today the plan is to get to Tbilisi. One can do so by train or by bus. Train, may take about seven hours while the bus will take four. What’s the catch? The bus, or Marshrutka, is really just a mini-van being piloted at insane speeds by the angriest men alive. They also don’t have a specific departure time. We arrive at the station after picking up some veggies and find out we’re the first ones to show up. So we sit in the shade and wait for maybe thirty minutes until enough passengers arrive for us to make our voyage. It’s about 98 degrees today, and the bus is hot. We stuff ourselves in with some teenagers and babushkas, sweaty but excited to see Tbilisi. The babushkas instantly complain that there’s no air-conditioning in the bus. The bus driver, a little bit defensively, says something that seems like “no, it’s not working”. The babushkas and some teenagers prod a bit more, asking for air-conditioning for several moments until the driver suddenly erupts, turning on the air conditioning in a fury while screaming some nonsense at everyone. He keeps going for a few minutes, until his bald head turns so red it almost starts to steam. He turns the air conditioning off again five minutes later and has some little screaming arguments here and there for the next thirty minutes. After realizing that he’s been yelling at little old ladies for thirty minutes, he removes his sunglasses and crosses himself three times. We just sit there, almost in shock but honestly, a little bit entertained by the ruby headed driver. 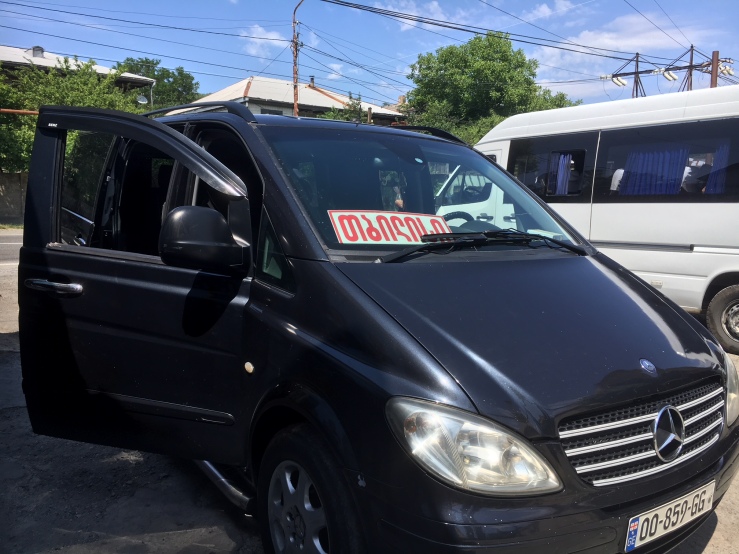 We arrive in Tbilisi around five o’clock, just when the heat is finally starting to cool down. A quick ride in the surprisingly modern metro gets us to downtown, where we get to our hostel. I usually find some insanely cheap deals on booking.com, but there’s usually something off about it. Generally, it’s a hostel owner that needs to get rid of some rooms. In this case, we have an entire basement to ourselves for about $15 per night. Perfect for the heat. Pretty hungry, we find a local place to get some food. Most restaurants in Tbilisi offer the same food in a similar locale. They’re usually underground, have waitresses that are fed up with life, and have an owner that’s pretty grandiose. They stand behind the refrigerator, peering at everyone while expediting meals and dealing with money. For our meal, we have free entertainment as two Russians get drunk behind us by singing in between shots of chacha (local vodka).

It’s the kind of thing you romanticize every bar to be like, just some really talented folk musicians getting drunk in the corner playing around with a fiddle or a piano. After the meal, we wander around the nearly cooled down Tbilisi to view its sights. 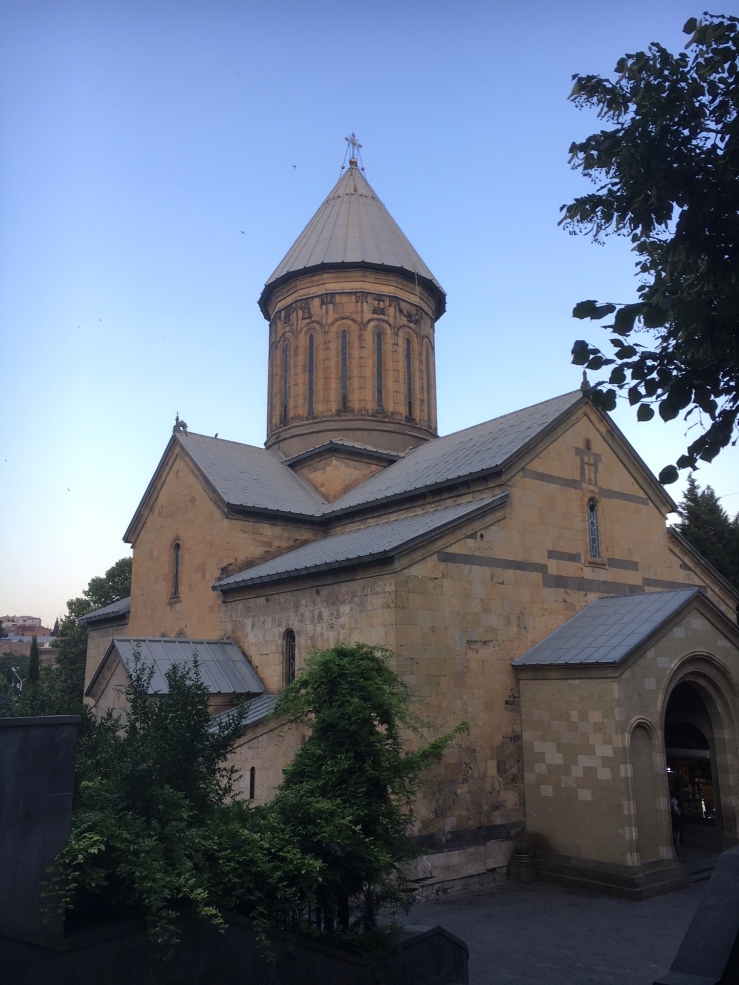 Downtown is extremely modern and decently well kept. The building sizes are only a few floors, and most of them have intricately designed balconies. It’s a bit like New Orleans, but just a bit more run down. It’s great for a stroll, and I inevitably start doing that thing of “Oh, I can live in that apartment and put these plants out blah blah blah…”

At some point, we look around for some beers and randomly stumble into a little bar near our hostel. It’s neon pink sign convinced me in, and we were instantly greeted by two drunk Georgian girls. The bar was nearly empty but obviously hipster. There were avocado seeds growing out of shot glasses, old Russian posters, succulents, and everyone had chopsticks holding their hair. Not even fancy chopsticks. The bartender pours us some beers and a round of shots, and we get to know each other. The two girls, Sal and Katja, are both in their early twenties and love talking about how beautiful Georgia is. They give us some tips on what to see, and we talk about how much we love Berlin and cheap beer. A new bartender walks in, with a big bushy beard and long hair being held by a (nicer) chopstick. Some Russians then wander into the bar, and Sal decides it’s time for all of us to start playing UNO. Nobody knows the rules, so most of the time it’s just “Why can’t I play that?!” and “You’re making rules up”. I’m amazed by how the Georgians are able to talk to us in English and then instantly go into Russian, then talk amongst themselves in Georgian. It’s the kind of fluid polyglot life more people should live, in this time where English is a pretty spoiling language to speak natively. But these are the first Georgian’s we’ve met that speak really fluent English, so it’s nice to finally meet some locals our age and compare life. 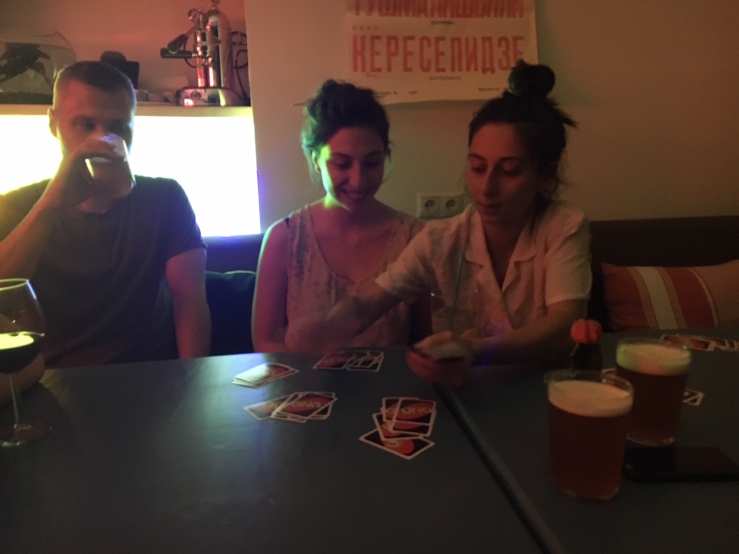 I think they’re all kind of tired of Tbilisi life, and have dreams of moving to Western Europe. But life is reasonably laid back in this city. They invite us to the next bar, and we stuff six people into a taxi and get there. It’s a bar in Dadaena park, and it looks like just locals here. At this point, I’m a bit too tired and over-UNO-ed to socialize further, so we have a beer, say goodbye to the lovely Georgians, and wander back home.

Our cave hostel means that we get no sunlight, and we wake up a little bit too late. Regardless, we go for a wander. We have two days to wander before heading to Baku in Azerbaijan, so we decide to have a reasonably relaxed time. In Georgia, the perfect late breakfast is a khachapuri. This time, it’s served like a bread boat.

Yes, sweet sweet child, your eyes do not deceive you. That is bread filled with melted cheese, butter, and an egg cracked on top. And it’s every bit as delicious and sultry as one might expect. There’s just enough bread to sop up all the goodies, and I quickly have a clean plate. We walk around the park we had just had a drink in last night, and where they also have a massive flea market. This is the perfect market for anyone into Soviet memorabilia. Ivana gets a fancy chopstick for her hair, inspired by the new style. It probably won’t take me long to find one either.

It’s a bit too hot to get really into sightseeing, so our two days were spent wandering the city in the cool hours and exploring as much as possible. Tbilisi is a very relaxed city and reminds me a lot of Tirana in Albania. Green giant trees line the streets, and the architecture suggests that there has been a good sense of life here for hundreds of years. EU flags adorn many public buildings, and I see the NATO from time to time. It seems a bit risky to look West when Russia is looming above, but the Georgians seem to be steadfast in their aspirations of Westernization. Already, it’s a lot cleaner than a lot of European cities. The people are far more friendly, and the food has a lot more to offer than some more (Northern) European countries. Culturally, Georgia is very Western. They are one of the oldest Christian nations, one that did not lose its traditions during the Soviet epoch. But their geographical placement makes them more of an Asian nation, placing Georgia in a bit of a predicament.

Now that we’ve seen Tbilisi, it’s time to move on to Azerbaijan. As Azerbaijan needs a visa for entry, this is the only part of the trip that has been planned. We leave Tbilisi on a night train and get to Baku in the morning, and what lies ahead on a thirteen-hour train ride is completely unknown.