“Welcome to the United States of America. Did you bring any food items with you today, sir?”

“Some apples and carrots.”

“Sir, you’re aware you can not bring fruit or vegetables into the country…correct?”

“See here, on the customs form where it says ‘I am in possession of fruit or vegetables’…you were supposed to cross ‘yes’ instead of ‘no’. Do you understand the difference, sir?”

“Ya but I wanted to eat my apple,”

I’m aware I lied, but it was such a good apple and I wanted to bring some goodies for my upcoming two-hour bus ride into New York City. Somehow, I found a cheap flight from Norway to New York…But the part of New York you probably shouldn’t fly into because it’s a two hour plus drive into Manhattan.

It’s difficult to talk about New York. It’s one of the biggest, most diverse places on the planet and I’m supposed to just sum it all up in a decorative, curated blog for humanity? Too difficult, I say. Rather than give a ‘guide’ or a ‘here’s what I did in New York’ kind of post, I think it would just be lovely to just talk about it, with my delightful readers. Because at the end of the day, I just don’t feel like making a big gross Instagram friendly post about the city. I just don’t give a shit.

On my first lunch in New York, we went to a Vegan restaurant so I could let my body ease into the transition period before ingesting American-sized quantities of meat and carbs. Across from my table sat two twenty-somethings, probably Media Studies majors doing a field study on urban veganism. The restaurant’s specialty was a bowl of curry with kimchi and some green bits, pretty delicious but not overwhelming. Even still, one of the girls was doing a full-out, Austin Power’s, cover of Vogue level photo shoot with her bowl of mush, making it pose like a cheetah and Tooch that kimchi booty. When she was spent, she just sat on her phone diddlydoodling and who knows what with her artfully photographed mush, letting her $16 lunch go cold and underappreciated. It was ridiculous. So I decided I didn’t want to make a New York blog post, I just wanted to talk about New York with you lovelies. So let’s begin.

I’ve been here a couple of times over the past seven years. I’ve come for different reasons, from Model UN to visiting underground Latin Jazz bands to other random events. It’s a city I’ve gotten to know quite well since my lovely cousin Ellie lives here, and a city that has grown on me a little bit more every time I’ve returned.

There’s just nothing else like it on the planet.

I always get this unique feeling of rebirth every time I leave the subway, and I’m just addicted to it. I emerge from the underbelly of the city, goopy from sweat and cranky from the heat. Blinded by light, my eyes grow accustomed to my surroundings. What language will they be speaking in the new world? How will this new world look and feel? All I know is, it will be completely different from wherever I just came from.

There’s a certain multi-culturality to New York (and the US in general) that I’m so in love with and makes me thirst for whenever I’ve been in homogenous Denmark for too long. To me, New York is sitting on the subway across from a Chinese woman speaking into her phone, sitting next to a gigantically tall African-American man loudly listening to music on his way back from the gym, next to a Latino man dressed in a linen suit with a flamboyantly bright pink bow-tie, holding a painting he must have purchased at auction, sitting next to a white girl with half-blue-half-black long hair and butterfly tattoos, scratching off a week’s worth of old black shellac off her fingernails. New York is the beauty of American multiculturality, the beauty of all of these amazing cultures coming into one island with a simple desire to make their lives and the lives of their families better.

My lovely cousin and her husband live down in Brooklyn in the Polish part of town, which was perfect as a cultural bridge back into American culture for me (You can read about my recent time in Poland here ). It was oddly refreshing hearing Polish and saying dziękuję when getting my morning bagel. There’s a little bit of everything in New York, which I certainly miss when I’ve been in homogenous Denmark for too long. Here everyone blends in together, and I think it’s amazing.

I went to the World Trade Center memorial, which I’ve been to before several years ago but never really appreciated. Back then, I appreciated the artistry and the metaphor of the cascading, dramatic waterfalls surrounding the footprints of the skyscrapers once towering over the city.

I appreciated the view of the new One World Trade Center, towering over Lower Manhattan where its predecessors once stood.

But this time, I had a whole new context to it all. When I travel and hear American tourists, loudly parading down streets and causing a drunken ruckus, I often think “Oh God, why couldn’t I have been born in Canada.” Here, I was standing next to people that I had never met, yet somehow felt some form of familiarity with them. My very cliché “Fellow American’s”. I felt a kinship there, that all of us have sat in front of the TV watching the same clip over and over while crying the same tears. They all felt so familiar, and I felt like part of them. I didn’t feel like an expat in a foreign land, or an American despising the sound of his own people. I felt a member of something greater, bigger. I’m sorry to get so gushy, but it truly is an incredibly powerful experience. I was simply speechless. 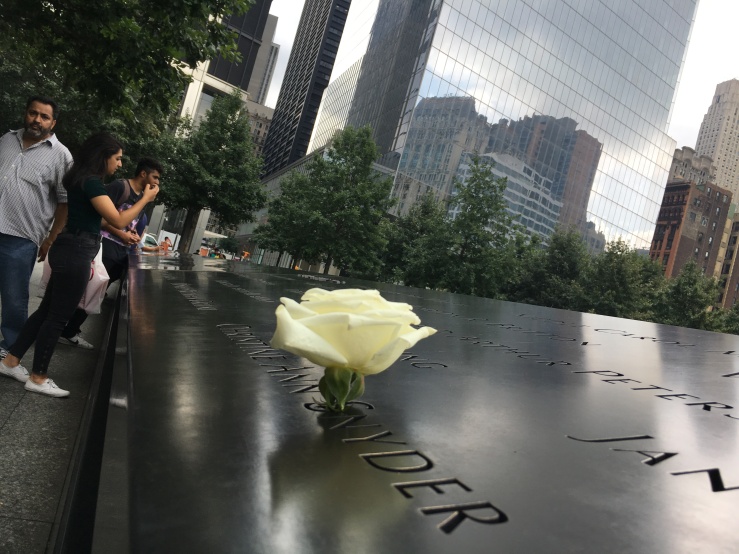 City planning and art in New York leaves the mind speechless. From the beautiful Highline to the grandiosity of Central Park and the skyscrapers surrounding the entire city. 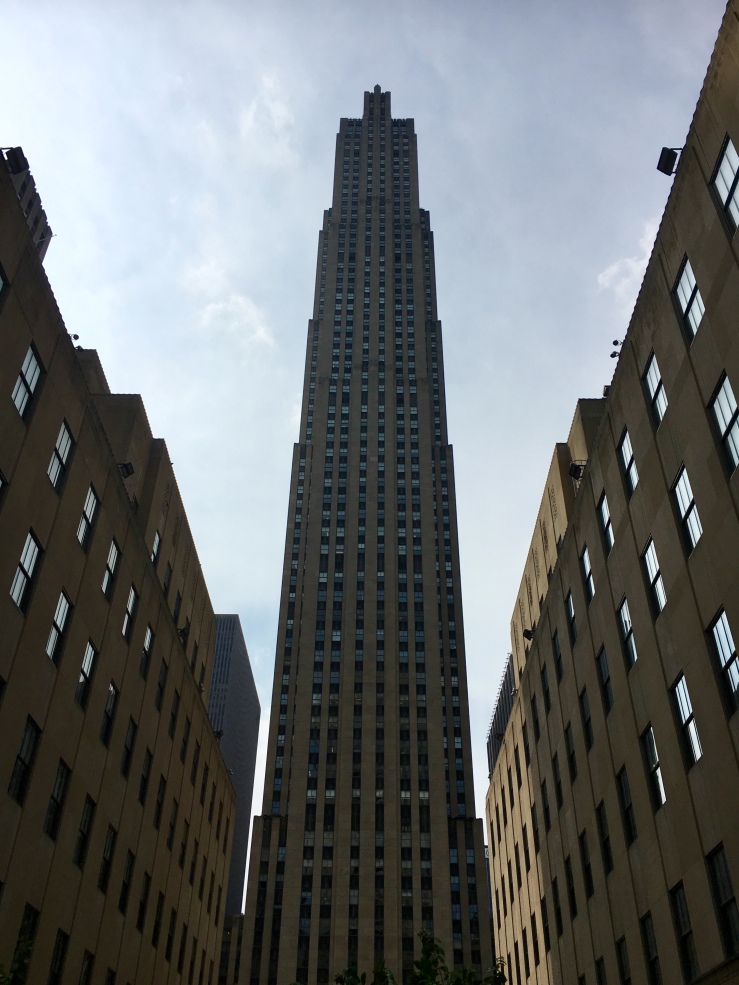 Everything in the city took so much thought and effort, and it reaches as far as the eye can see.

In this city, one truly feels anonymous. There’s not much nature, but there’s so much human nature. I could spend hours just sitting and watching, enjoying those passing by.

Since I’m traveling with my mother, an artist, we have a plan of seeing as much art as possible. I’ve been to the Guggenheim before, but never the MoMA or the MET. The time had come, and I was shocked by how much I had missed out on. The MoMA is absolutely palatable, and filled with Modern goodies from Picasso to Van Gogh.

But of course, more people stood taking photos of this than standing and appreciating.

The MET was massive and awe-inspiring, filled to the brim with everything and anything from ancient Cypriotic statues to Contemporary avant-garde. It was simply too much, and I would need a day or two to get through everything.

It’s such an extraordinary museum entirely devoted to the past and the art and antiquities of it. Even the stairsteps leading to the museum felt like a special exhibition on humanity which also deserved special attention. There’s so much going on in this photo, from the countless selfies to people checking where to eat next to a kid with his fist in his mouth to people enjoying the atmosphere to whatever else may be happening. It’s an exhibit on all races, people old and new, all coming together to view paintings on walls to better understand the pasts we all come from.

Everyone in New York is beautiful.

As well, seemingly everywhere in New York is beautiful.

Any direction you turn to yields a new horizon of concrete skyscrapers, or even old trees and brownstone strewn streets.

In New York, I get the feeling that every individual behind those windows and doors lives a life worth telling. Of course, everyone has a story, but I feel as though the stories in New York are always a bit ridiculous. That’s why things like the “Humans of New York” exist because the people that permanently congregate in this city come up with some amazing reasons to do so. There is so much creativity and art around every corner, so much life and brilliance everywhere you look. Since I’m traveling with my mother, one of her friends from high school works here as a concierge and is, therefore, of utmost authority when it comes to New York’s cultural events. We meet him in Harlem at a little hole in the wall local bar called Shrine, which is also the only place I’ve found a beer for less than $8 in New York. It feels like a locals kind of place and a bar for nearby Columbia students to meet up and listen to music. People meet up with friends or neighbors or coworkers or strangers and listen to tonight’s offering of a fusion of jazz, R&B, and rap by a local band.

It feels so refreshing to see some local life that doesn’t surround the yuppiness of Manhattan or the hipsterness of Brooklyn. We walk around a bit and stumble into Showman’s club for some live jazz and gin n’ tonics before calling it a night. A night with live music is always a night well spent.

The next night, our last night, my mother’s friend pulls some strings and gets us into a showing of Smokey Joe’s Cafe, which I had never heard about. I’ve only been to one Broadway show, The Book of Mormon, and I’m kind of embarrassed that it wasn’t as mind-blowing to me as it was to everyone else. Regardless, I was excited to see something a little Off-Broadway and it did not disappoint. It had absolutely no plot, it was just really talented singers and dancers belting out amazing renditions of old songs from Elvis and some other oldies I can’t quite place a finger on. It was a literal musical, as there was absolutely nothing else other than music (and some dance…).

My time in New York is always spent well. Even if I just go to a borough I’ve never seen before just to walk around, I have an amazing time. I’m so lucky to have an awesome cousin up here as a reason to visit, and this was the first time I’ve felt “Maybe I could live here one day…” as I walked through the streets, dreaming about what could be. All I do know is Colorado’s next for me!

Thank you so much for reading, and I apologize for posting this one so late. Please feel free to give any comments or feedback if you have some!

As well, if you are new, welcome and check out where my journey began here!

A content creator and community manager for the Be My Eyes app, I use my free-time exploring new places and cultures. I have a knack for traveling on a budget and discovering new and amazing things, so join me as I discover everything the world has to offer. View all posts by weekend-rambler