Fat snow fell as the bus from Skopje pulled into Sofia Station. The sun had long been down, and even though it was only 21:00, it felt as though the station had been asleep for a long while. I disembark, and immediately notice how much colder Sofia is than Skopje. 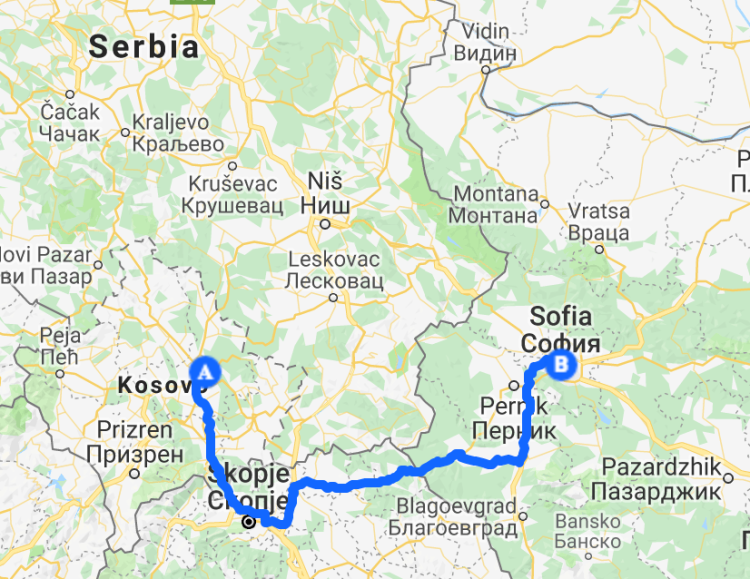 The buildings are grey, designed in a square in front of the main railway station. There is almost no signage pointing towards the metro, so I wander beneath the yolk yellow glow of artificial light before finally stumbling on to the metro system. Surprisingly, the metro station is spotlessly clean. It is a stark contrast from the grey and yellow above ground.

I had arranged to meet with my Couchsurfing host, we’ll call him Mark, at his place of work in downtown Sofia. Mark is a private programming teacher, and as the exam period is approaching he found himself very busy doing private lessons into the late hours of the night. After sitting on the spotlessly clean metro, I emerge and find his office, in the building of a co-op creative space. There are hip artists taking a smoke break outside, and a lecture of some kind going on as I walk in. I journeyed past the lecture and went upstairs, barging into Mark’s private lesson. The student gave me a look of shock and terror, deep in his craft. Mark only looked up and smiled, saying he would only be a little while longer. I sat on a big armchair outside, like a little kid waiting for his piano lesson to start, until Mark emerged from his lair and with a smile said, “He’s so screwed for that test.”

We left the co-op space and head back to the metro, stopping briefly at the corner store to pick up some ajvar, dark bread, and tomato paste to make a little late night dinner. Mark is reserved and soft-spoken, but quick to smile and laugh when I throw a stupid joke at him. Mark is a little bit of a metalhead, so our ride to his apartment on the outskirts was filled with conversations of metal bands I have never heard of. Mark does not have a big urge to travel, so couchsurfing allows him to experience the world in his own apartment.

We ventured out into the snow and trudged through the concrete blocks of post-Communist era flats until we got to his, on the absolute outskirts of the city. I jokingly remarked that he may as well live in Serbia, to which he turned to me and said, “Yes, at night we could see the light from bombs during the Kosovo conflict.” Sofia is so close, and I can not imagine how it must have been to be so near a conflict of that scale.

He prepares some lentil soup while I eat some ajvar, and we talked about music and politics and history and everything in between. We got so into talking that Mark completely forgot he was making soup nearly two hours ago and rushes into the kitchen to hurriedly finish it up. Nothing like lentil soup at 2 am.

I told him of my plan to see the monsters the next day, to which he shrugs unknowing of what I am talking about. I am surprised when he tells me he has never been to the festival, let alone even heard about it. Pernik, the town where the festival is held, is only fifty minutes by train or twenty by car from where Mark lives. Why am I the only person interested in this festival? After lentil soup, I rush to bed to dream of monsters. Finally, the purpose of my trip has arrived.

The next morning I awoke and hurried to the train station. The train was packed with tourists, internationals, and Bulgarians alike. It was a bitterly cold and grey day, and I fear that at some point I will have to cut my monster watching early to grab some heat. But when I arrive and hear the clanging of huge bells and the sickly hum of bagpipes, I realize I will be far too enthralled to feel cold.

In a square ring of people, a group of monsters dances as traditional instruments blare. Surva is a festival where tribes from all over the Balkans come to show off their monster dances. It serves as a way to preserve traditions and advertise the village. During my time, I was given little touristic pamphlets from different villages and even a rose shaped bar of soap from one. The monsters ran around shaking their bells, making a deafening cacophony of noise that could be heard all the way from the train station. Every now and then they’d remove a monster head to take a swig from the liquid in a dirty soda bottle stashed in their furs, and then dance with twice as much vigor. At this moment, I realize that this long but wonderous trip was absolutely worth it. 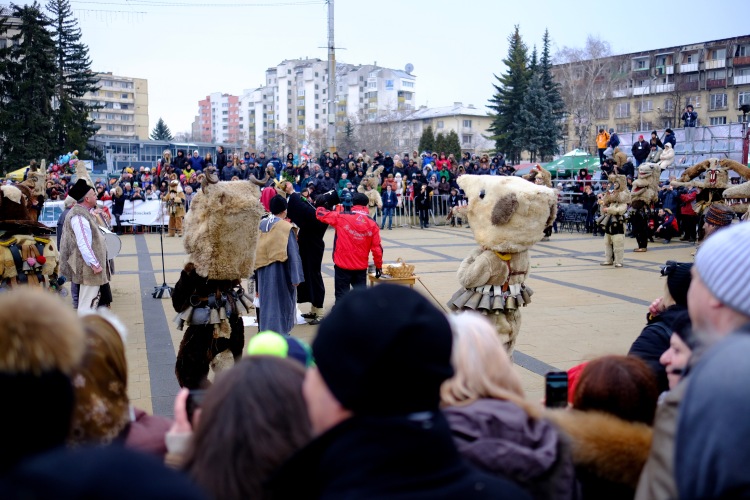 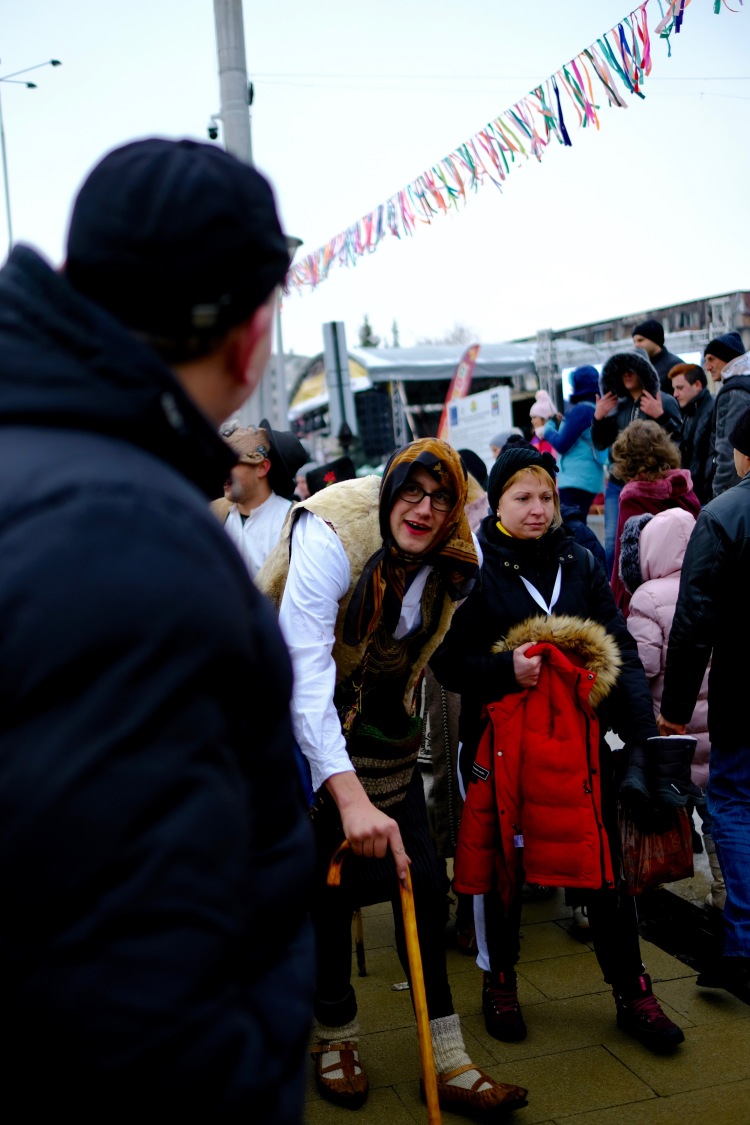 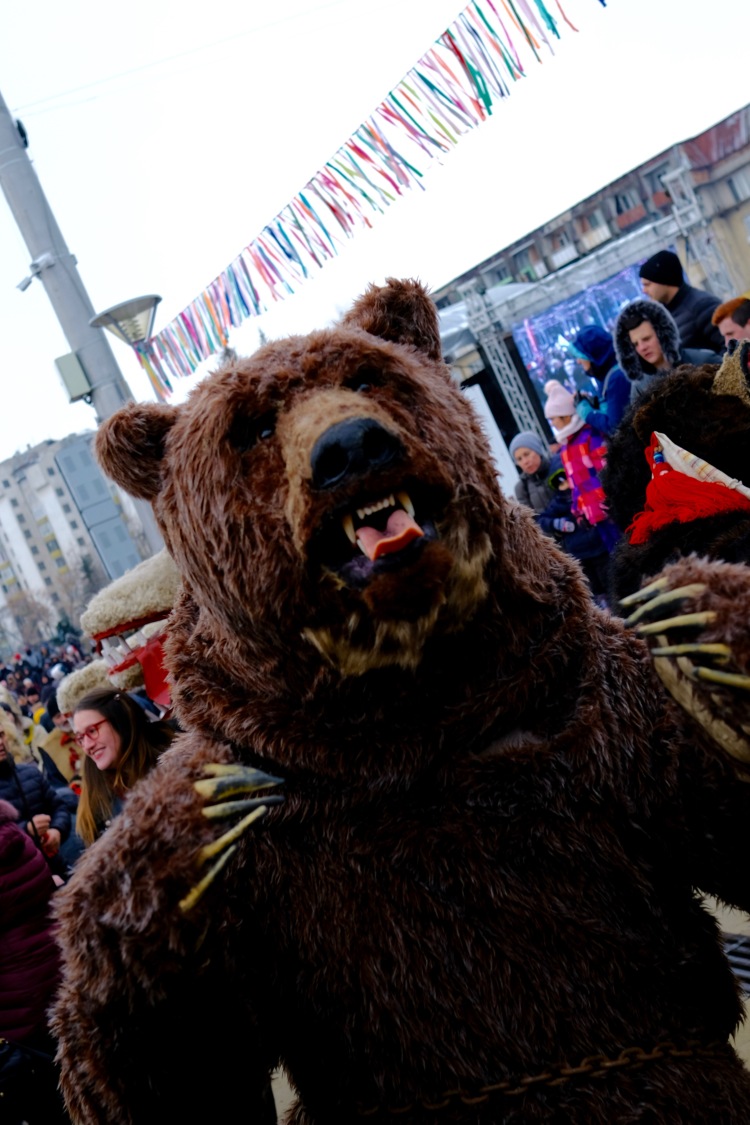 I am reminded of a time when I was privileged enough to see the Hopi Tribe’s harvest festival as a child. We were the only Caucasians in the village, watching dancers perform and help send spirits back home. It felt like stumbling upon an ancient scene from centuries ago, and Surva feels very much the same. I have a certain fascination with our interest as humans in disguising ourselves, and in dressing up as Gods or monsters for some religious purpose.

Each village had their turn to impress the judges and the audience, and would then parade out around the city and allow the next village to shake their bells. Often, the entire village would join in on the festivities, dressing up kids and the elderly and drag queens alike.

Some of the villages had nonsensical performances, but the best villages had great costumes and a story to tell. Some would have fake weddings which would be interrupted by a monster invasion, and some would feature a fight between two waring monster tribes. All involved a bit of vodka and a bit of violence.

Eventually, the cold did start to get the better of me at around -9°C/15°F, which led me to wander around the village and grab a big refreshing cup of hot wine. While the main stage was quite fun, I found that hanging out where the village buses were parked was the best place to catch the monsters without the crowds. Here as well, I had a better chance to get up close and personal with this wild creatures. 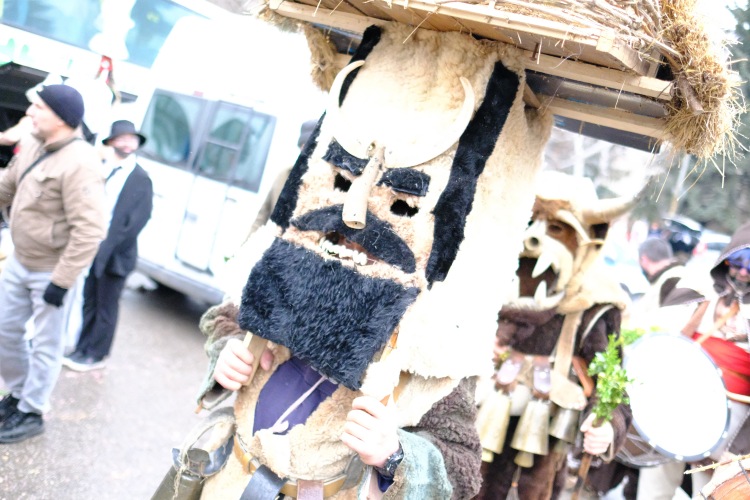 So much work has gone into this festival, but even still no one gives me a good answer as to how it all began. From what I can piece together, it stems from pagan beliefs that have existed since Ancient Greek times, and serves as a festival to scare away the winter. How romantic, but I’m pretty sure it is just an excuse to drink.

I spend a while longer with the monsters before the cold gets a bit too much for me and I take the train back to Sofia and back to Mark’s apartment. Another couchsurfer arrived while I was gone, a Berliner who has been on the road for nearly a year. When I return, I excitedly show some videos and ask if anyone wants to go back the next day.

But I feel I had enough monster time, and the next day I chose to wander around the city and experience it a bit. The weather improved quite a lot, yielding me a lovely day to explore the city.

I was not expecting to like Sofia as much as I did. It is gritty, yet beautiful. It is Sophisticated, clean, and easy to get around. Sofia was a delight.

I spend the day wandering around town, going into little dusty bookshops and cafes. The city is perhaps the nicest I have visited in the Balkans thus far, mixing the grit of Berlin and the beauty of Vienna in one little bite-sized city. The locals are friendly and easy to talk to. They are some of the most approachable people I have met in the Balkans. Usually, I was the one approached just for a quick conversation with one of the locals. The conversations never lasted long, but they always ended with a smile and an “Enjoy your stay.”

That evening, I met up with Mark at a small club to hear some metal music. Mark is a reserved guy, but as soon as the band started his inner beast turned on. Soon, he turned into one of the monsters, thrashing like an animal in the moshpit. It was a beautiful transformation.

The next day was my last, and I had no plans of what to do. All I knew was that I would be spending the night in the airport before my early morning flight back to Copenhagen. So I spent my morning wandering through the National History Museum, then wandering the city more.

I am beginning to believe that the concept of price is a conspiracy. Why does a 2-liter bottle of beer cost $1.20 in Kosovo while a can of beer in Denmark costs the same? Why does a stamp in Kosovo, a country that is still developing its infrastructure, cost only $.50 while a stamp in Denmark costs about $2.50? Why does a ticket for a museum in Sofia with enormously valuable minerals cost $2 but a museum in (you guessed it,) Denmark cost $20? Or a delicious coffee of $.70 in Bulgaria cost $3.00 up North. I digress, and I know that there are a lot of taxes, bureaucracy, and property costs at play here, but it still peeves me off a wee wee bit. I apologize, Rant Over.

Sofia was a lovely wandering city, and I am confident that in Spring it would be even more beautiful. This is the kind of city I could revisit, and certainly a country I could revisit as well. Beautiful, affordable, and in a way quite unique. Cyrillic comes from Bulgaria, and its a country with an incredibly long and rich history. There are well preserved Ancient Greek burials, along with some of the most beautiful looking mountains in Europe. Bulgaria, I shall return someday. 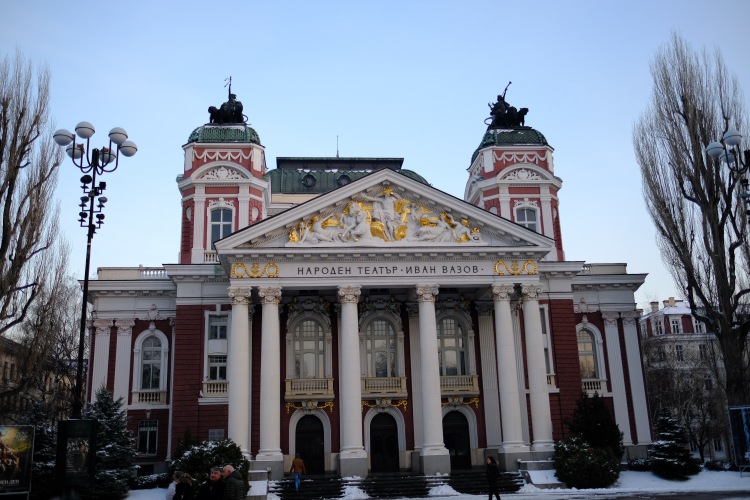 As nightfall approaches, I move to the bar for my last bit of affordable beer before heading back to Denmark. I took one of the last trains to the airport and found a nice little bench to grab a few hours of sleep. Surprisingly, I am not alone. My flight was at 6 am, and there is no early morning public transport from the city, so some locals take the cheap option and grab some sleep on the cold metal benches along with me. Soon, I will be back in Denmark, and as I drift to sleep I think about this weird journey I have taken through Vienna and Serbia, only to see some monsters dance around a cold village and ring bells. When I say it like this, it sounds absolutely ridiculous, but it was well worth the journey and the people I met. It is always an amazing privilege to be able to travel, even in the dead of winter, and I am incredibly grateful to have been able to experience this wonderful tradition and see these strange cities along the way.

Thank you for sticking with me up until this point! This was my most recent trip, and I hope to be doing some other rambles soon enough. Thank you again and hope to see you soon!

One thought on “Walking with Monsters in Sofia”