Ever since visiting Morocco last January, I have thirsted to be back in Africa among the hectic dusty streets and crowded bazaars of this beautiful country. The colors, tastes, smells, and people made an everlasting impression on me in my first journey, one that stuck with me and built a craving to return.

A little over a year later, I found myself preparing for another journey to Morocco with a purely ‘go-with-the-flow’ attitude. Last summer when visiting Slovakia, Ivana’s Aunt Katka invited me to come to Morocco the following February. I shluffed it off, figuring it was too far in advance to actually plan or put proper excitement into. Even as I packed my bags the day of my flight, I could not properly address what I was about to do. This was mainly because I was not in any control over the planning of it. We would be guided deep into the Moroccan Sahara by Katka’s trusty Spanish tour guide, Juanlu of Huerta Grande Tours, who has spent the past several decades going up and down Africa on his motorbike. He knows Morocco better than the back of his hand, which allowed us all to sit back and watch Morocco pass by. With this ahead of us, it was time to venture into the Sahara and explore the secrets of the Moroccan desert.

Late at 9 pm, Ivana and I boarded a Norwegian Air flight from Aalborg to Málaga.

We arrive late, around 12:30 to be picked up by Ivana’s father, Patrick, and Aunt Katka. We’re all tired, and Katka is loopy from dealing with some sick children back home, but we all pile into her Mini Cooper and drive towards her home in Marbella. We arrive to meet Ivana’s well-liquored and often satiric Uncle Roman, who greets us with some beer and laughter. Roman rarely Slovakia, so it is odd to see him so far from home. By the time we get in bed, it’s nearly 2:30.

The alarm goes off at 5 am. Time to go to Morocco. Me, Ivana, Katka, Patrick, and Roman pile into the minivan equipped for Katka’s three fiery blond kids and shoot towards Estepona, where we pick up two of Katka’s friends, Peter and Janna. Piled in like a tin of sardines, we drive down the 6 am Spanish highway to Tarifa to meet with Juanlu. Under the stars, we throw our bags into Juanlu’s VW van and push ourselves. I grab some sleep, blessed with the privilege of being whisked away to an unknown destination.

I awake and find myself on the ferry from Algeciras to Ceuta, a Spanish city on the Moroccan coast that serves as one of Spain’s last colonial holds over Africa. My eyes are droopy with fatigue as I slurp vicious black coffee hoping it will cure my tiredness. Juanlu and I are the only members of this nine-person ensemble that cannot speak Slovakian, so we are completely unaware of the constant crackling conversation coming from our travel companions. I never have a clue of what people are talking about, but they are always laughing which leads me to believe that I am in good company.

The border procedure going from Ceuta is a little intense. This isn’t your normal border control: it’s a border between Europe and Africa. We pass through into Morocco and immediately get pulled over by a routine police stop. In Morocco, a country with a heavy police presence, it is almost odd not to be pulled over by the cops at one point or another. The policeman comes up to the window and tells Juanlu to get out. The two have a little argument, and the policeman hands him a speeding ticket of €15 for speeding 3 kph over the speed limit.

Welcome to Morocco, where even the cops have perfected the art of the scam.

After this brief stop, Juanlu pulls us into a smokey cafe looking onto the seaside. The barman brings us thick coffee and mint tea, bowls of large black olives, poached eggs in fresh spicy olive oil, local honey, fresh goat cheese, and sourdough bread. A good meal in Morocco will fill the soul with the most local and most delicious produce available. We dine and keep moving, South towards the final destination of Meknes. We pass weary looking strung out sheep and sip on beers in the back of the van, listening to Juanlu’s exotic and perfectly curated Spotify playlists.

We explored Meknes in my last journey to Morocco, but I must say that Meknes was one of my favorite cities we visited. It is far less touristy than the other big Moroccan cities, thus the weary traveler can be greeted by the wonderous sites and smells at their own pace without being hurried or annoyed by the typical Moroccan bazaar intricacies. Meknes is beautiful, and still one of the best cities to buy rugs, ceramics, and spices. 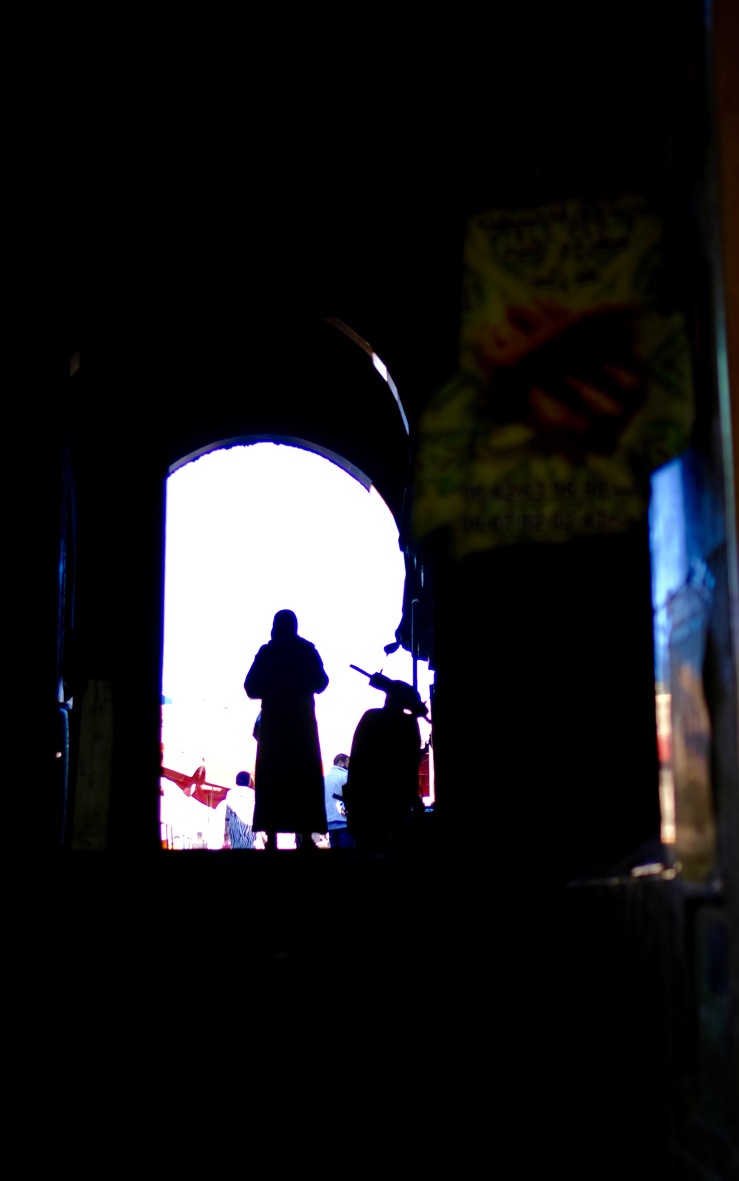 It’s easy to see why Morocco is one of the most photogenic countries in the world.

We walk around a bit and stop for heady mint tea in a Riad, a typical but always enjoyable fare for any Moroccan visit.

After some tea we wander out into the Medina and the main square for some wanders and entertainment.

The square is packed with people and plenty of entertainment and has probably been the main source of entertainment of the city for the past centuries. In Meknes, it feels like not much has changed in the centuries other than the introduction of electricity, and the patinaed walls of the alleys have endless charm. 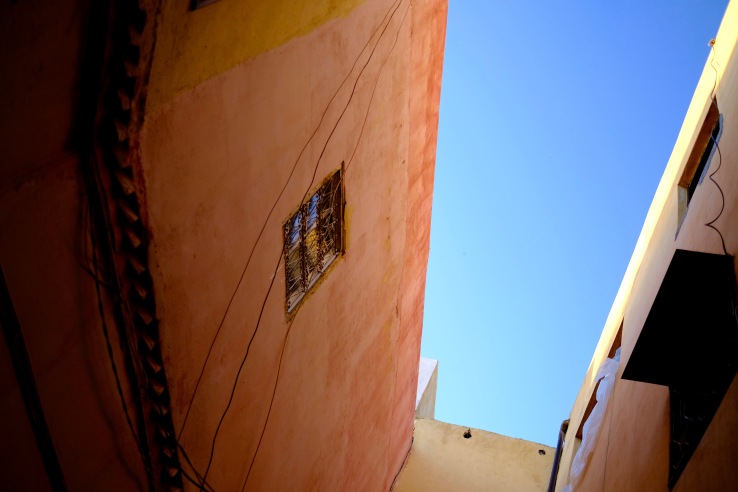 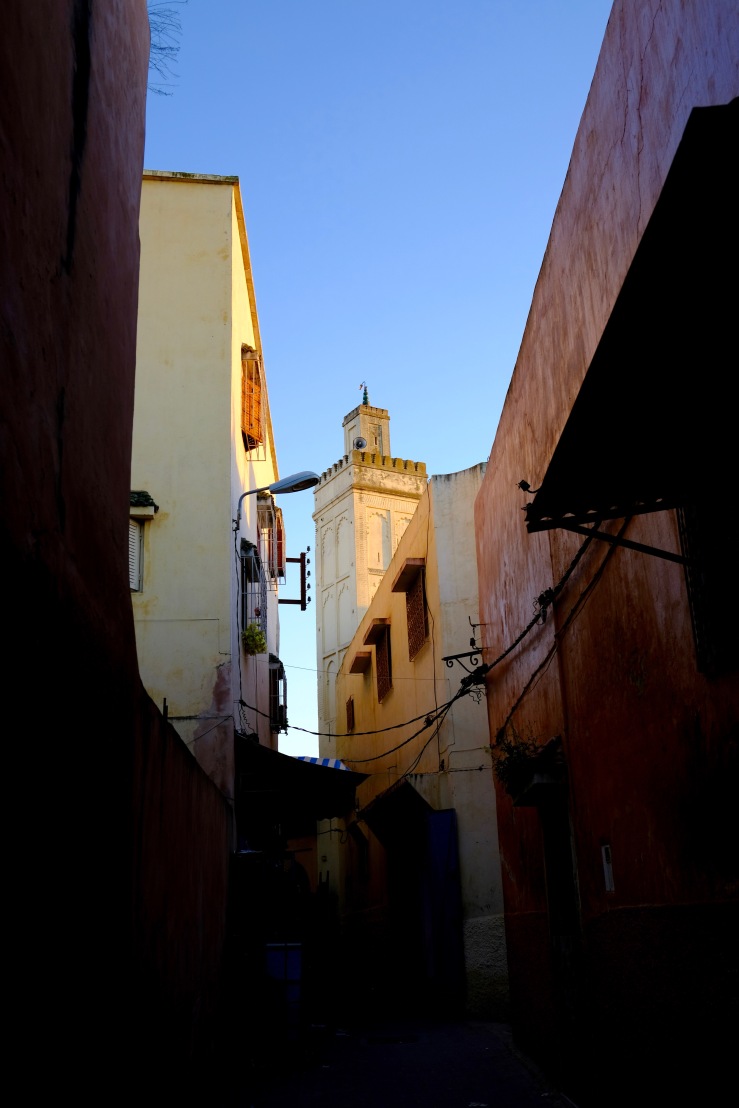 We dine at the same Riad in which we had tea. Monumental tajines filled with steaming couscous and vegetables, freshly rolled lamb kofta swimming in sweet tomato sauce, and more olives and sourdough bread along with some red wine we smuggled in from Spain. It is rare to find a country that can satisfy the stomach quite like Morocco.

The next morning we wake early and make the journey South into the arid hinterlands, stopping occasionally for brilliant sunsets over the rolling hills. 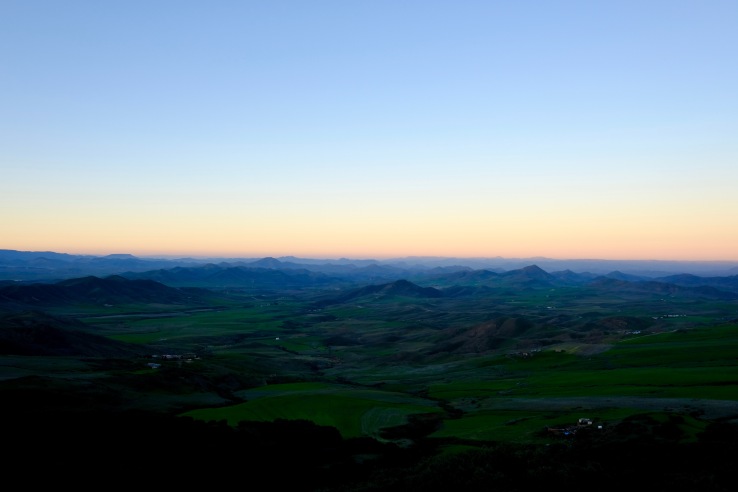 The North of Morocco is quite beautiful in its lushness, but all of a sudden a border is reached where the green ends and the dust begins. We drive fast, passing more stringy sheep surrounding abandoned looking mud-brick houses and establishments. 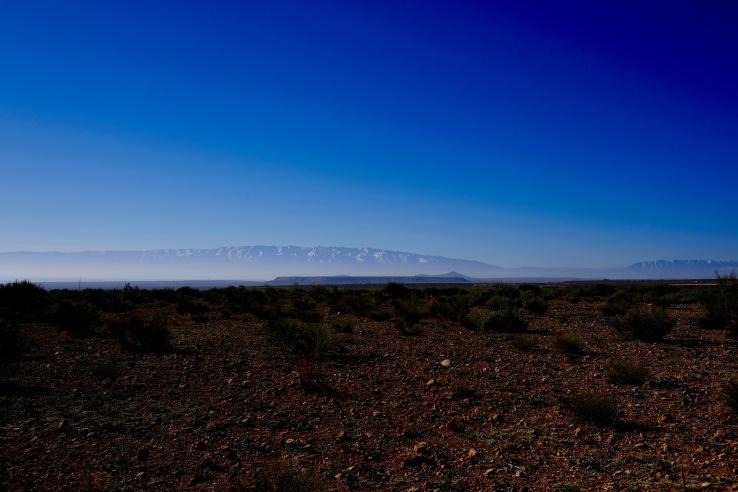 Juanlu stops us in a small city to grab a break of delicious coffee and flatbread dipped in more spicy olive oil.

We keep moving, as today seems like a heavy driving day only. But we pass amazing dystopian landscapes with endless vastness.

A small town appears out of the desert, and we are greeted by some young Senegalese men that often dot the borders of many Moroccan towns. They come up to work, and then often ask passing drivers for money or for rides. Juanlu hands them a bundle of bananas, and they smile and wave thanks as we drive on. Juanlu parks and takes us to a hole in the wall, a place most people would avoid and most health inspectors would shut down. But Juanlu says that we could either go to a fancy restaurant, or we could eat at a place where the money will really count. While the restaurant may not have looked like much, the food they served was truly exceptional. Along with our meal, Juanlu purchases some extra meals for future customers. Juanlu is a mysterious man, with a sense of humor that takes a while to catch on to. His energy blossoms from his core, dancing to the Cumbia music he blasts from the van.

Back in the car we go, until we finally reach the desert of our desires.

It was a long day, but we finally made it to the border of the Sahara.

We sleep and prepare for our first big day in the vastness of the desert.

Sorry for a long post, but I am uncertain of how to fit so much into so little space. I have a lot of things to share from this Moroccan Desert Roadtrip, and a lot of beautiful experiences and photos to share with you all. If you have made it this far, thank you for doing so and I hope you will stay with me. Please like, comment and subscribe if you feel!

An International Studies major at Aalborg University, I use my free-time exploring new places and cultures. I have a knack for traveling on a budget and discovering new and amazing things, so join me as I discover everything the world has to offer. View all posts by weekend-rambler