Big things have changed in my life, including finally receiving my degree from Aalborg University. With this piece of paper reading “You’re now an ‘adult’….on paper”, it’s time for me to venture out into this world with starry eyes and a can-do attitude (or whatever).

But not without a good ramble first.

Yes, before I can trade my soul for a 9-5 and a home in the suburbs, I have to go out and do one last backpacking trip to make sure I don’t lose touch with my wild hobo side. I’m throwing out my tentacles where ever I can, doing some work with a travel show and elsewhere. In September, I’ll be starting an Internship with Be My Eyes, an app which allows blind and low-vision users to connect with volunteers around the globe to help them through daily tasks. My job, while still very fluid, will include Spanish in some way. Since I haven’t spoken Spanish regularly since backpacking around Argentina five years ago, I decided it would be time to immerse myself once again and reacquaint myself with the rolls and tumbles of Castellano.

So it’s off to Spain with me.

After a brutal 15-hour layover in Boston, which included getting drenched in a Boston downpour, having enough coffee to jitter all day, and eating pizza from a guy named ‘Vinny’, I ended up in Madrid at the humble siesta part of the day. Here, I met with my old friend, Simon, AKA the Sheriff of Aalborg and current church liaison for Danish sailors ported in Rotterdam. He’s the most Danish person I know, so this trip should be a pleasure. We stopped by the hostel for a quick and well-deserved siesta before venturing out into the cooling sauna of Madrid at dusk.

Madrid is one of those enigmatic cities that deserves more attention than the other more ‘popular’ cities in Spain. During our two days in Madrid, it felt like the only time we encountered other tourists was when we strolled through the Prado Museum. Madrid is criminally underrated compared to the likes of Barcelona, Madrid, and Andalucia. But I suppose in the heat of summer, tourists want to dip into the Mediterranean rather than take a siesta in a sweat-drenched bed. Fine by me, as long as it means I can enjoy this fantastic city without the crowds. 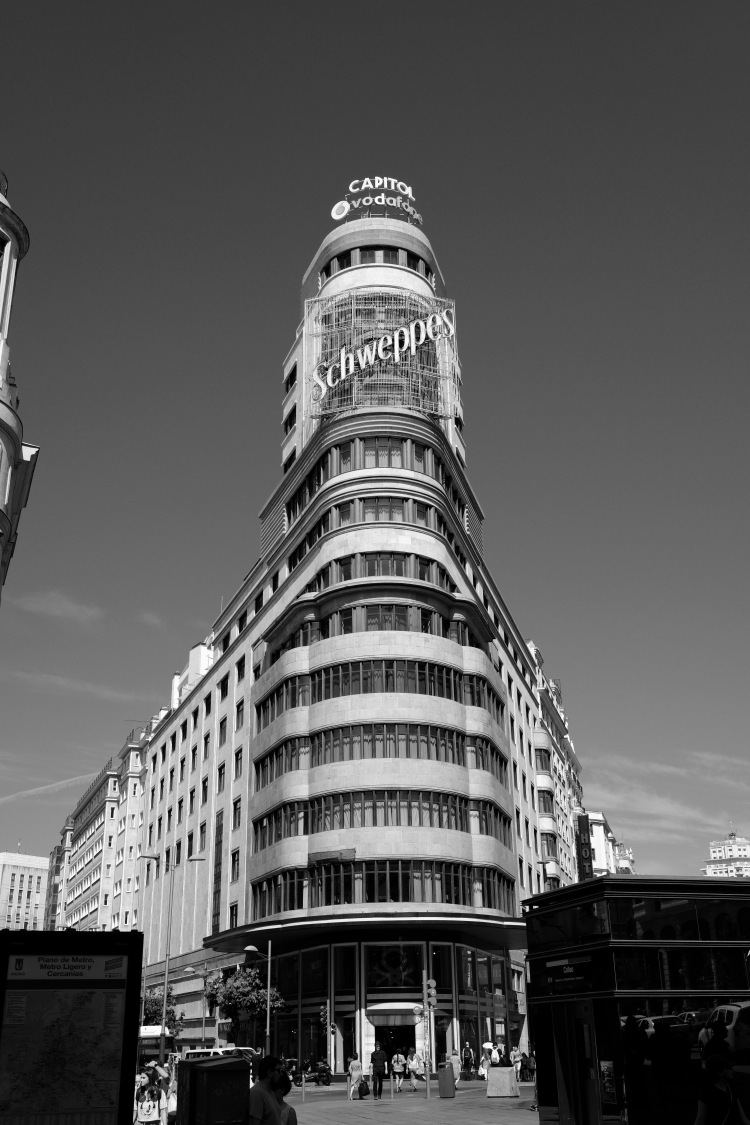 The streets and buildings have all seen better days, but they still bustle with the lives of fast-paced Spaniards going out late on a Wednesday night for some tapas and a few little beers. Madrid feels, much like Berlin or Washington D.C., like a city made to live in rather than supply the tourists. Even still, we found ourselves wanting to stay longer than two days. The little cafe across the street from our hostel had a steady stream of locals that came in for coffee and a peruse of the newspaper at the same time every morning. No loud British gides, no Americans asking if the bread is gluten-free. Just people that have lived through the Franco years and are just trying to enjoy their juice and toast before a long day of work.

This is the kind of place I’d want to live.

The days were long and sweaty and filled with a lot of walking. This allowed me to start my new collection: Simon swiping Tinder and applying SPF 50.

We only had one full day planned to enjoy Madrid, so we made good use of it. Much of the day was spent at the Prado: which is best seen during the siesta hours. We bought our tickets online, which saved us a good 30-45 minute wait. Besides seeing the artistic wonders of crazed and demented Goya and the regal Velasquez, the Prado was an overwhelming experience in its sheer immensity of works featured within its walls. Three floors with countless masterpieces from across Western Europe and across stylistic greats. The museum is a treasure on this little planet, but it is not for the fainthearted. After a long day, Cowboy Simon needed to cool his artistic self with ice cream.

The benefit of this Carter-Simon match up is that we both love a good road trip. Railroads are the most romantic and buses are the most cost-effective, but cars are the freest form of transportation. No other form of time travel besides teleportation could have allowed us to view all that we did in the timeframe of two weeks. I don’t often splurge on a rental car: but this time it was more than worth it.

With our brand new Peugeot 2008, ‘Natalia’, we headed North to uncertain territories. The goal: to go from the Basque Country to Santiago de Compostela, and see what happens in between. No rules, no set dates, just figuring it out as we go. This would leave us free, and most certainly leave us in some rewarding situations.

The first stop was in the absolute middle of nowhere, somewhere in the territory of Castilla y León North of Madrid. Here, we found Sad Hill Cemetery: the set of one of the most famous scenes in movie history.

Here, Clint Eastwood wore a badass poncho and lit a cannon with the burning ember of his cigarillo in The Good, The Bad, and the Ugly. And here, Simon and I did bad impressions of Clint Eastwood and bougie Frenchman.

With cinematic shots taken and cigarillo smoke still fresh in our aching lungs, we headed North to an uncertain destination deep in the sweeping mists of the Basque Country.

One thought on “Madrid and Cowboy Country”