When we last met, we were spreading fast in our silver Tuna, Natalia, towards the great unknown of the Basque lands. Since moving to Europe almost four years ago, the Basque country has fascinated me in the way a toy car does to a child. Something about the rocky cliffs, the intense desire for independence, and the language that has no resemblance on this planet have made me a fan of the country for a little while. The unfortunate part of traveling to this area in the heat of summer is the tourism oozing over the French border, thus skyrocketing prices everywhere. The cheapest place we could find, two bunk beds high in the misty peaks in some remote town called Aulesti would suffice for a night of Basque immersion.

We arrived late, in the dark of a spitting rainstorm to the little hostel high in the hills. I walked in the bar to check on the room. Many hotels here supply for Pilgrims on the Camino de Santiago and thus have restaurants and bars in the bottom of giving customers everything they could desire. I walked in and was immediately targetted as the “tall, long-haired foreigner”, which leads a barrel-chested Basque man, drunk on more bottles of wine than I could ever fit inside me, to call me out.

“You’re so tall” He said in Basque, and then translated to Spanish once he realized my deafness towards his tongue.

“Yes, yes, I’ve been blessed by the Gods.” I returned away from him. “Good evening, we have a reservation for-”

“But how tall are you?” He pointed me out to his neighbors, who had obviously been listening to his antics for too long and had lost all interest. “Look how tall!” His bald head was shimmered red as his excitement heightened. “Where are from?” He said in broken English. “De donji eres?” he tried in some drunken slur of Portuguese/Spanish.

“Wuaw!” He took my long, dainty witch-like guitar-playing hand in his oven mitt of a palm and squeezed it until the blood ran out. I smiled in an “I’m a tough guy too” kind of way, to which he took his meaty bludgeoning fist and pounded my chest with the strength of a falling anvil. The hit sent tremors down to my toes, but I smiled and quickly asked for the barman to give me my keys before rushing out in fear he would show me more of his farm boy strength.

The night was long and inebriated. We flowed into our room and drank a bottle of wine before heading to a bar down the street. There we met the owner, Unai, a nice man who grew up just around the corner and had a lot to tell us about the Basque Country. He brought us some Jamon and cheese to snack on while we sipped our tiny beers and told us of his mysterious little land. While he was talking, one of his long-gone drunken friends came up to him and asked who we were. He swayed as if dancing to his own tune, grabbing hold on the back of Unai’s chair for support. I told him I was from the U.S., to which he spit in his hand and offered it to me. “Welcome!” He posited, dewey palm outstretched.

Unai shooed him off and continued with his monologue. “The Basque Country, of course, should be independent,” he told us, with a flap of his wrist through the air as if to bash away the Spanish Republic. But of course, what would a Basque Country be without Spain and Spain without the Basque Country? I don’t know enough about the situation, so I can not say. But I can identify with the fact that this land has seen a lot of prejudice from its Castillian overlords, and desires to have its language and culture be independent on the stage of the World.

We wished we could stay several nights high in the misty hills, but the hostel could only hold us for one night. So, we moved on to the next cheap accommodation we could find. This time, it was in the neighboring state of Navarra. But the point of a road trip is to enjoy the journey rather than the destination. Unai told us to venture to the top of the nearby mountain to get a view, which was completely obscured by the spitting rain and misty curtain. The Basque Country feels much more like a part of Scotland or Ireland than a part of Spain. 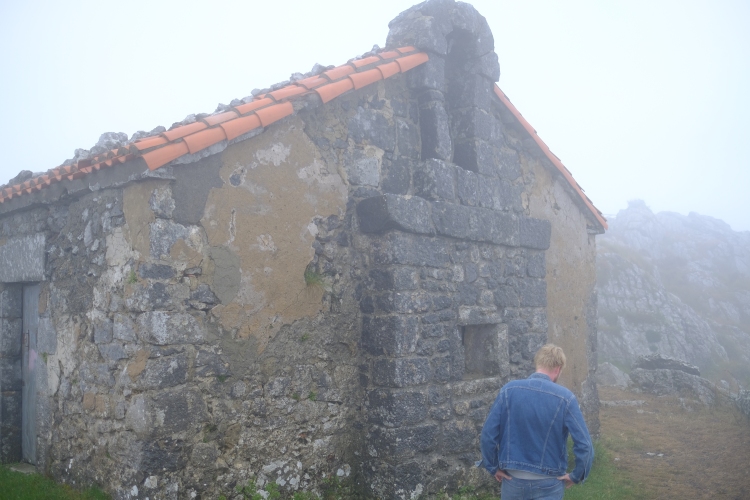 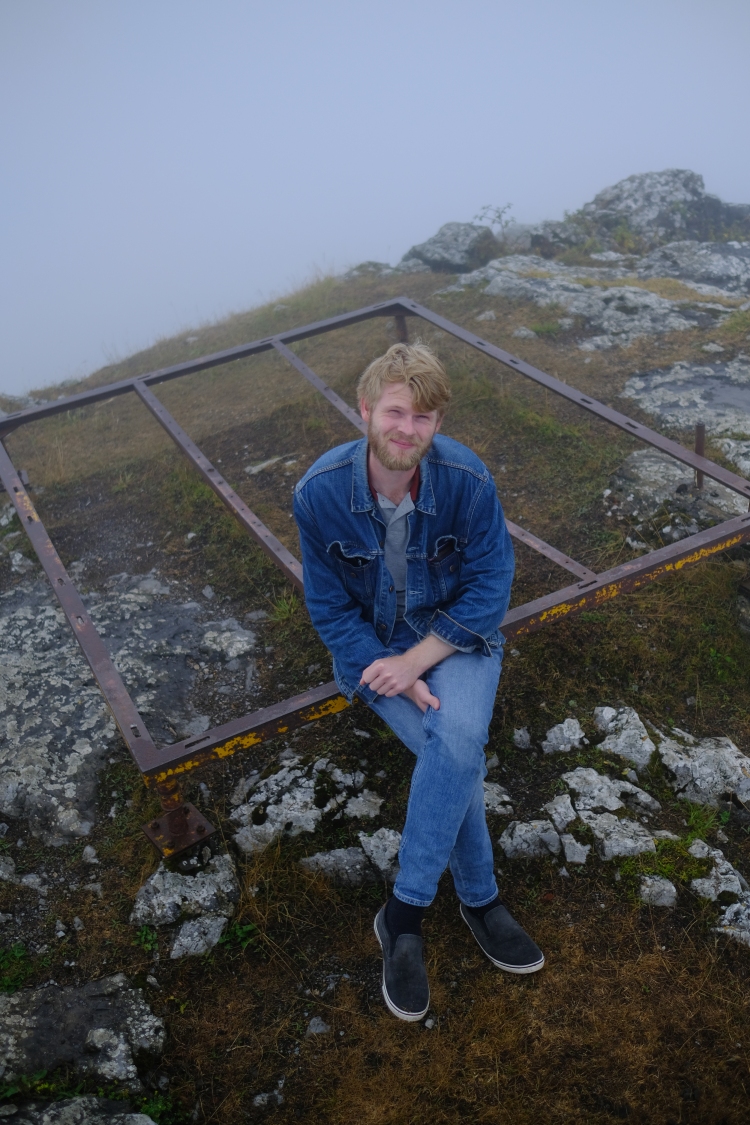 All that misty fluff around Simon would probably be a steep drop off on a good day.

With a good hike to start the day, our powder silver tuna shot down the highway to San Sebastian, a city I’ve heard too much about.

And as is the case with many cities I’ve heard too much about, I was not overwhelmingly impressed. Yes, the streets are gorgeous and cool surfer dudes walk around downtown in wetsuits and surfboards, but the cheapest rooms available in this time of year are $100 a night and the streets are packed with people. I’ll have to come back in another season, but I was ready to keep moving down the road. 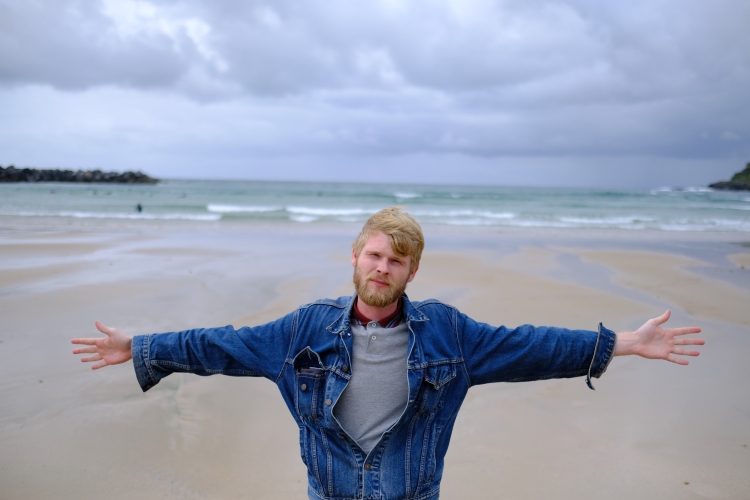 Now we were off to Navarra, the state right below to the Basque Country. Navarra gets little International hype, other than being famous for Pamplona’s bull runs. It also receives a lot of pilgrims on the Camino, and thus has tourism from that route. Aside from that, the lunar landscape of the Bardenas Reales has drawn us South to this little state.

To get there, we passed through steep and gorgeous cliffs and lamb filled pastures making delicious cheese. 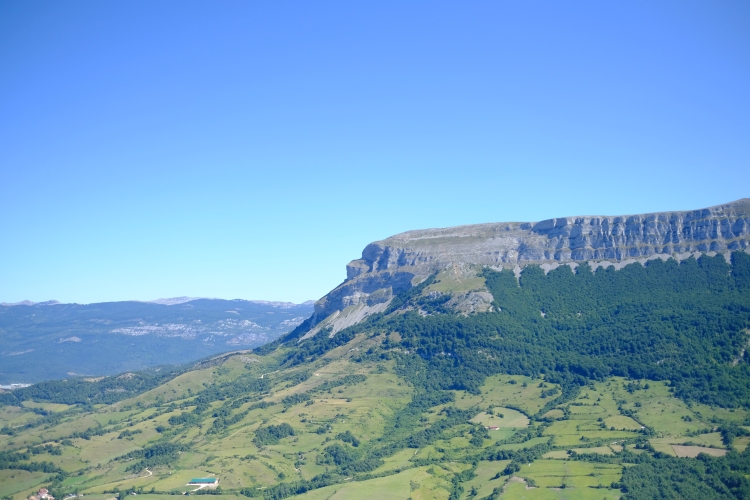 We finally arrived in our hostel in a little town not far from Pamplona called Lorka. The town only seems to survive as a place to house and feed wary pilgrims, thus we stood out a bit being some of the only tourists to travel by means other than dusty feet. Regardless, the town is relaxed and the beds are comfortable enough for eight euros a night.

The next morning, we plow on to Las Bardenas Reales, a National Park exuberant in its wealth of lunar-like desert landscapes. Simon being a Cowboy at heart finds this to be one of the prettiest places in Spain. I can help but feel a bit at home in this lunar weirdness, and feel as though I’m melting in a Dalí painting. 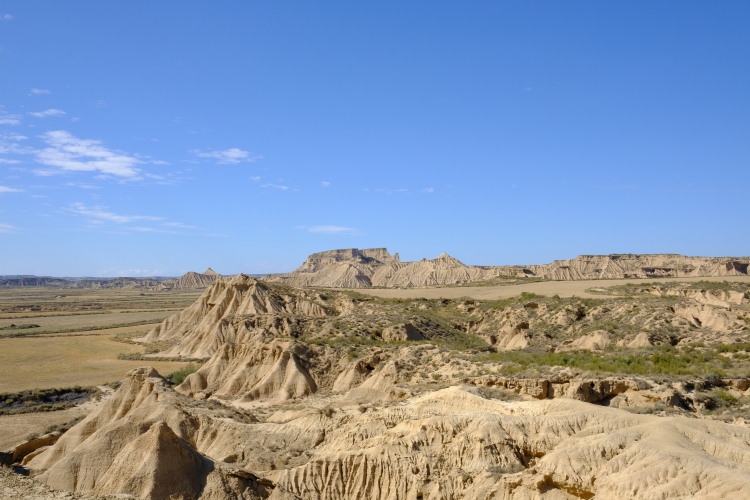 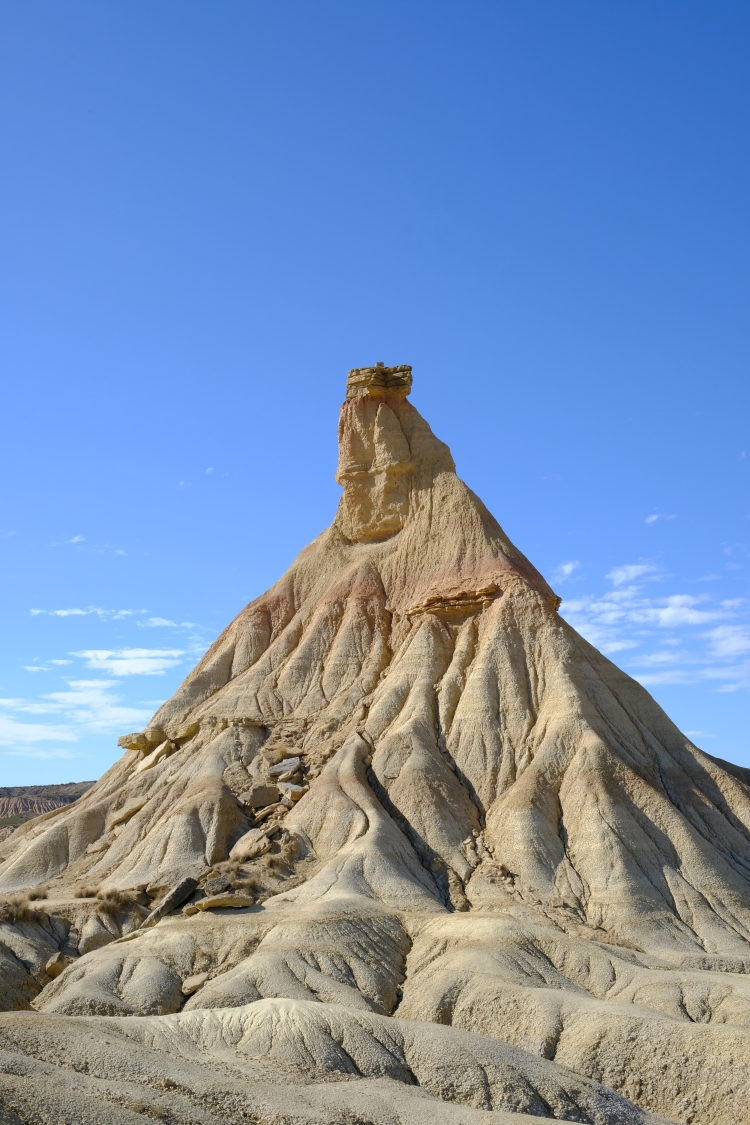 That supplied enough lunar greatness for one solid day. But we kept tumbling down in our tuna, down to Tudela. It appears that every little town is having a festival at this time of year, and we’ve arrived in Tudela in the aftermath of theirs. 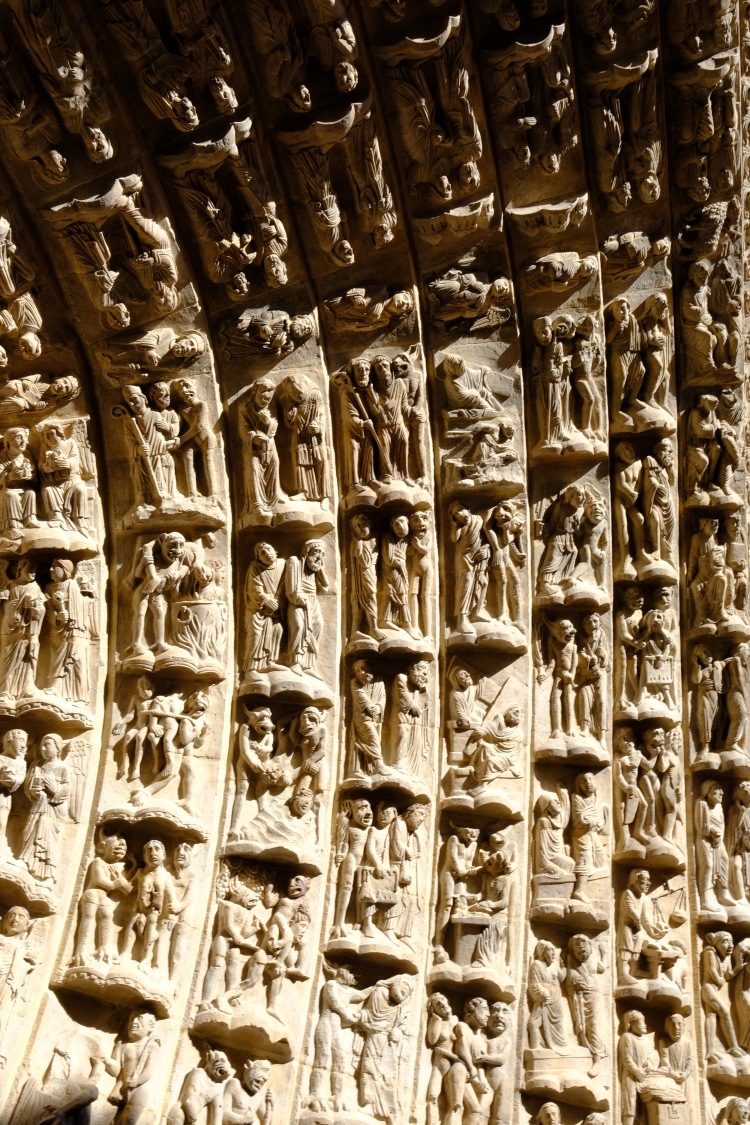 There’s leftover food, puke, used condoms, and remnants of a full days devotion to bacchanalia evaporating off the hot concrete. Everyone is dressed up in all white with red bandanas around their necks, a typical Basque get up. This is the time of year when many cities in the region, including Pamplona, let a bull loose into the city to see what havoc it creates.

For us, it created a night with some beers and an impromptu stumble in on a punk concert in an abandoned building.

One thing I’ve really liked about Spain so far is the amount of punk-looking kids walking around. It feels even more alternative than most other countries I’ve been in. Kids are angsty everywhere, but somehow this sunny paradise of olives and cured meats have bred some hardcore mohawks.

We’ve only spent a few days in the lunar weirdness of Navarra, but it was already feeling like the time to head back to the misty hills of the Basque lands. The next day, we packed up our bags and road the tuna back up North to see what we could find.