In our last episode, Simon and I had been on the road for about three days and stayed in the middle of the misty mountains in the Basque Country. Afterward, we went South into Navarra to see the lunar plains of Las Bardenas Reales. Read more here.

Now, it was time to move back up into the Basque Country. I had received a confirmation from a couchsurfer that we could stay with him in his small coastal town of Leiketio. I was excited to do so, as he was a huge Basque nationalist and I wanted to learn about his views on the country. But by the time we arrived and called him, the gremlins had torn down his end of the receiver and we couldn’t make contact.

So we were left on our own.

We headed West, along the coast to a small beach. Hear, we took a nap. Then, we decided if it could work as a napping place, it could also work as a sleeping place. 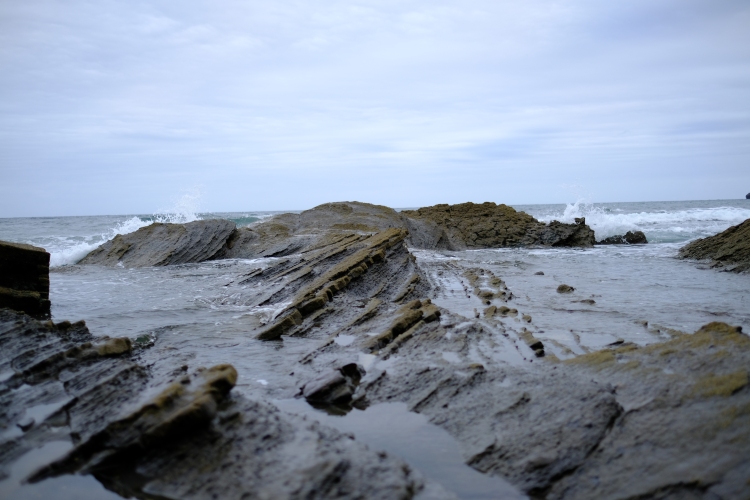 For hours, we sat and pondered and washed our dusty skin in the cold clear waters of the Bay of Biscay.

We headed back into town to acquire some supplies: salads, salamis, and a hefty supply of beers to make sure we would be knocked out for the night.

Stocked with our suppliers, we hit the beach once again to find a nice spot for our little car. We were only accompanied by a couple punk youths sleeping in their van and a German couple. We were living in our own little world, drinking our beers and listening to country music. Cowboy time. Our cigarillo supplies had run dry, so I brought out the pipe and filled it with strong cherry-scented Danish tobacco. I drank a little too much and smoked a little too deep, and by the time Simon had long been snoring my head had only begun spinning.

I removed my flannel shirt blanket and stepped into the night. I was surrounded by the cold smell of eucalyptus trees and sea breeze, spinning around with my swimming mind. The night was too cold and cloudy to see stars. In my head, I could see plenty though. I walked around, laughing to myself in pity at those who could not experience this wonderous haze I was currently entranced in.

I stumbled through my spins and went back to my flannel shirt blanket, and we woke up a bit chilled but still alive pretty late in the morning. Our next stop was Bilbao, the old industrial turned art capital of the Basque Country. But first, a stop along the coast to see some Game of Thrones coasts.

In Bilbao, I had a lot of work to catch up on for my internship. While I was locked away on my computer for a lot of the time, we did have some free time to wander and see Frank Gehry’s enigmatic Guggenheim Art Museum.

Bilbao’s a gritty city at heart, that really has struggled to shed off its soot coat. Our hostel was in a pretty sketchy part of town, and every time we went out at night we were offered whatever array of narcotics our pill-popping hearts desired. “Cocaina?” a voice would say from the shadows. “Hashish? Good Stuff!” Another would shout from the treetops.

But down in old town, Bilbao is quite charming. We stopped for some Pintxos (Basque tapas) at a little place that had an old man grilling up spicy skewers of chicken on a corner side hibachi. Bilbao went by in a bit of a flash, I was working too hard and the city stressed me too much to fully enjoy. Leaving was a welcome pleasure.

We continued West, out of the Basque country and into Cantabria and Asturias. We finally received some good luck from the Couchsurfing Gods, sent to us in the form of Anna. A Barcelona native, Anna grew tired of the city and moved out to the country. Here, you can rent a house for €300 a month and live in the steep hills next to the Picos de Europa. Asturias is probably one of the regions of Spain I know the least about, but it ended up being my new favorite region.

The towns are small and living off of pastoral farm and herding communities. I can see myself settling down here.

We met Anna later that night for some tapas at a local bar. The specialties here are chorizo boiled in apple cider, and a fried tortilla covered in the local blue cheese. This is the kind of blue cheese that burns your eyebrows off just by sniffing it, and I was reeking of it for a week after. The night proceeded with small beers, the typical Spanish cooler, in a small garden outside of a relaxed bar. 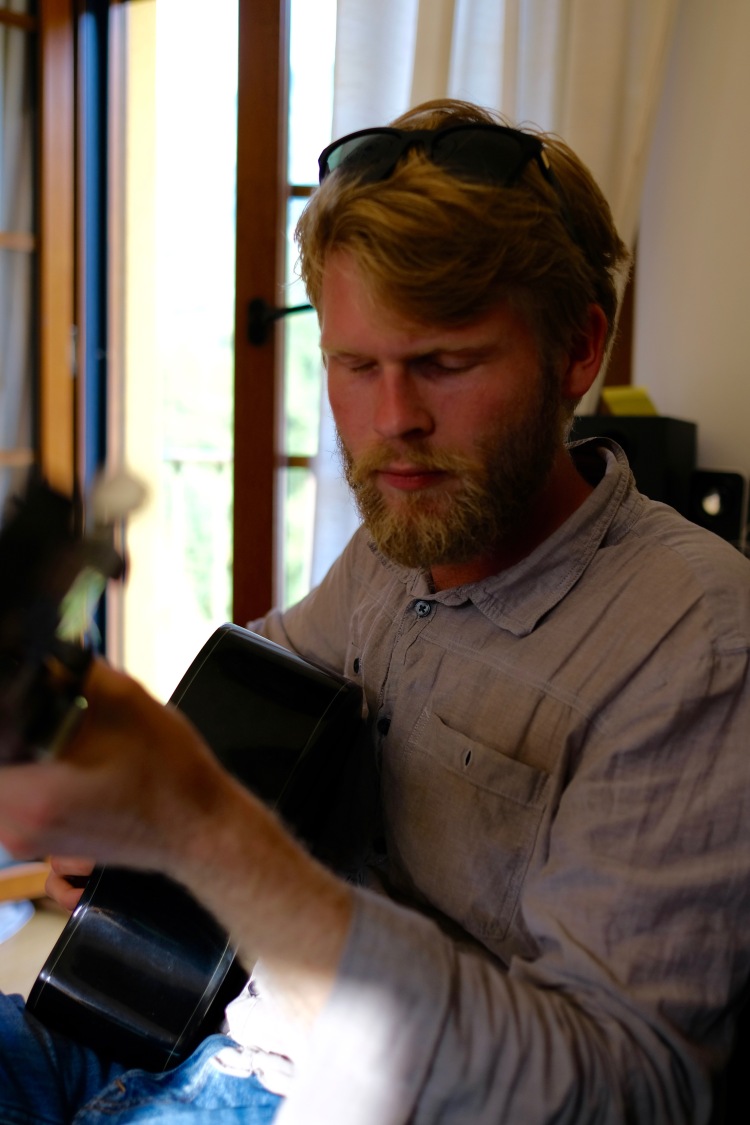 Anna plays snare in a traditional Asturian marching band and invited us to watch her play in a neighboring village down the valley. In the summer, villages throw little parties to celebrate the season and get a bit tipsy. Asturians are pretty nationalistic, and thus love to have a traditional band blaring their bagpipes while they frothy drink glasses of their bitter apple cider.

The bagpipe band plays around the city, calling everyone into the main square.

Here, the village meets to get a bit tipsy and buy lucky bread from the centerpiece.

One of these bad boys sets the village back €1000, so buy up! After that, the bagpipes winge again and lead everyone to the cathedral. There, those who are religious cross themselves while those, who are not, go get crossed at the bar. We, neither religious nor alcoholics, venture up the mountain to get a better view.

What we find is the steep sublimity of a mountain top sloughing off a mist that exits over the trees and down into the valley where the bagpipes blare. We sit for a while and eventually descend back into the town to see what is happening.

The prayers had ended and now the bagpipes blared down the streets of the small town of Siejo. A procession of elderly Asturians carrying their holy relic through the town as the priest blesses various houses along the way follows the bagpipes until all have returned to the center for more debauchery and drinking of small beers.

A bagpipe man has had a bit too much cider to drink, and his bald head glows red as a warning light as his smile breaks the folds on his cheeks. Anna turns to us and fans herself with her loose sweating hand, and I can not imagine how hot she must be under the armor of several layers of traditional woolen dress. It’s all a bit too much, and as the town parties, the bagpipes and snare drums get packed up and stuffed into cars. We file ourselves in and follow Anna and her two friends to an old Medieval bridge covering a bright blue glacial river. 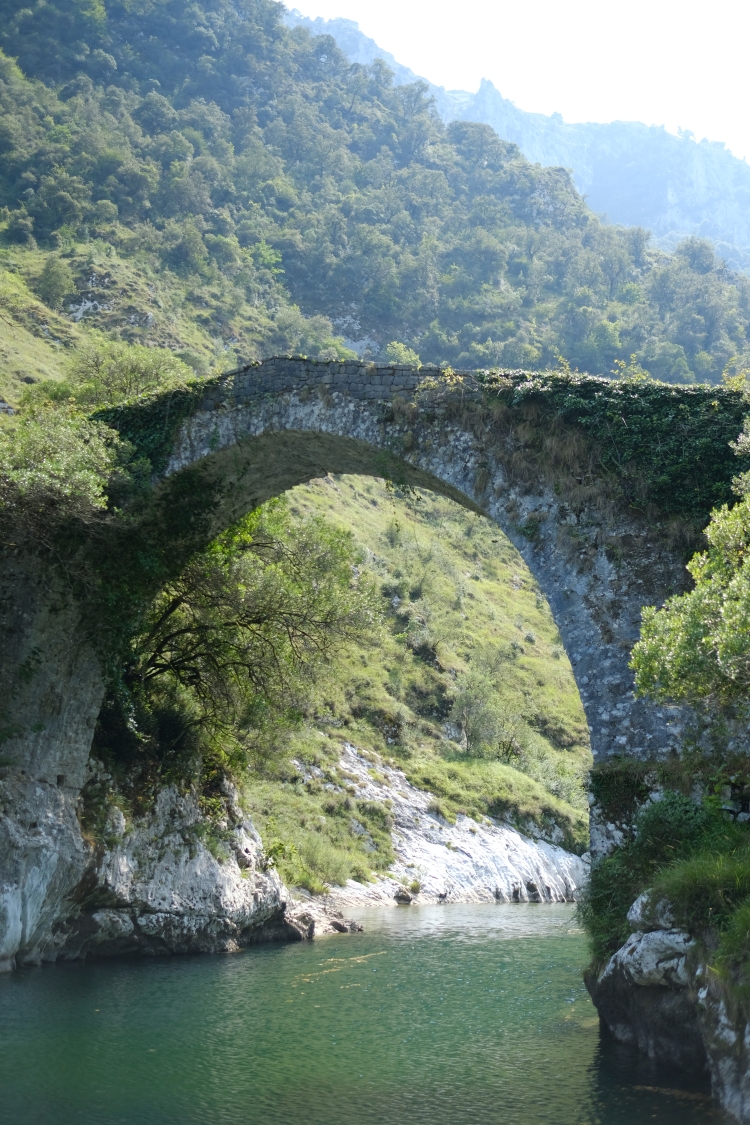 Every inch of my being wants to plummet into that cold blue water, but I know that the shock of being in something so pure may hurt the impurities I hold so dearly.

We relax more with Anna, enjoying the fresh mountain air and good company. The next morning, we hit the road and head West: back into the cowboy country of Castilla y Leon province in North-Western Spain. What lies ahead, are more deserts, Roman Gold mines, and quiet peace among the least rambled sector of Spain.