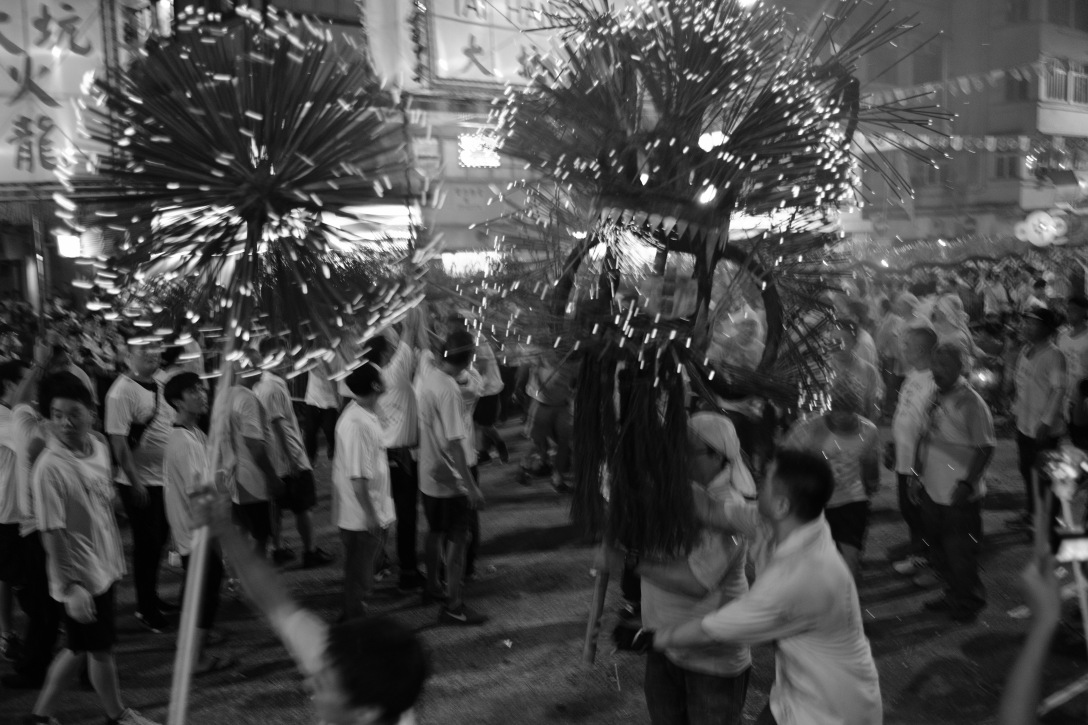 After my journey around Macau, I finally reach home at around 3:30 in the morning. That gave me just a few hours of sleep, having to wake up at 9 am to rush down south to catch my pottery class on Hong Kong Island. I didn’t even wake my roommate up when coming or going, which I’m pretty proud of. Today we learn how to throw, which was far more difficult than I had anticipated. My first piece was messed up and broken beyond repair, as I couldn’t quite center the clay on the wheel. On the second go, I do a pretty decent job and make a little bowl that I’ll put something in, I don’t know yet. The third piece went pretty crazy too, but I was able to turn its wobbly walls into a natural handle for an interesting pitcher. Even though it was difficult, it was an excellent way to spend a Sunday, even if my eyes were tired enough to fall out of their sockets.

Next, I head down to central Hong-Kong to do some exploring. I walk around Causeway Bay and wander into…of all places…IKEA. This one was odd though. It was too claustrophobic, and people seemed to just be inhabiting their Sunday’s here. The couch room was filled with people just relaxing, taking selfies and eating. I guess they come here to relax rather than stay at home. It wasn’t so nice of an experience, but I did finally find a succulent to liven up my dorm for HK$7 (about US$1). Afterward, I wandered around Victoria Park before getting a call from Charlotte. She and a colleague of hers invited me to watch the Fire Dragon festival with them, and I can’t turn down an opportunity like that.

The Fire Dragon festival started in the Tai Hang neighborhood in the 19th century to celebrate the Mid-Autumn festival (which I still don’t understand yet). From what I can gather, the festival is to meant bring about a good harvest year which you do by looking at the full moon while drinking tea and eating moon cakes (starch on starch: sticky cake filled with rice paste or bean curds). But this neighborhood has a pretty extravagant way of celebrating.

I meet up with Charlotte and another ecologist, Nico from Florence, and we head to a restaurant nearby with a photo of the owner with Anthony Bourdain. Must be good.

As soon as you get a photo with Anthony Bourdain, you can charge what you want I suppose. The food was okay, just too expensive. It certainly felt like a little local shop though. Maybe he went here a decade or so ago, but I trust that man’s palette more than anyone else’s (may he rest in peace).

We head out and stroll around Victoria Park, where there are little art installations and craft stands to celebrate the holiday.

Now, my journalism professor Michael is meeting us nearby. I’m excited to see him working in the field. We wait around for a while, just enjoying the slowly cooling night air. 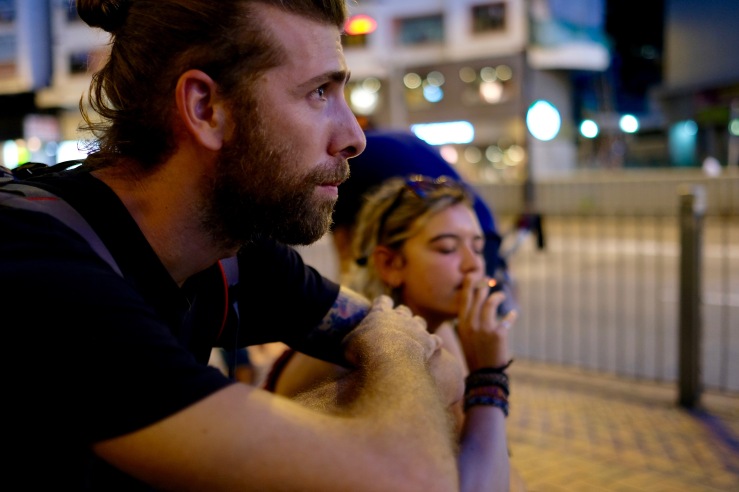 Michael shows up, and we head on over. The fire dragon won’t be lit for a little while, but Michael makes conversation with some police officers to get a better idea of the event. He says that’s the best way to find out what’s going on, and for them to recognize your face and hopefully let you in for photos. He keeps note of their names, and regularly thanks them and shakes their hands. I’m taking mental notes the whole time.

We’ve got an hour or so until the dragon lights up, so we head back to Victoria Park to see the lanterns at night.

We even get to catch a miniature fire dragon! 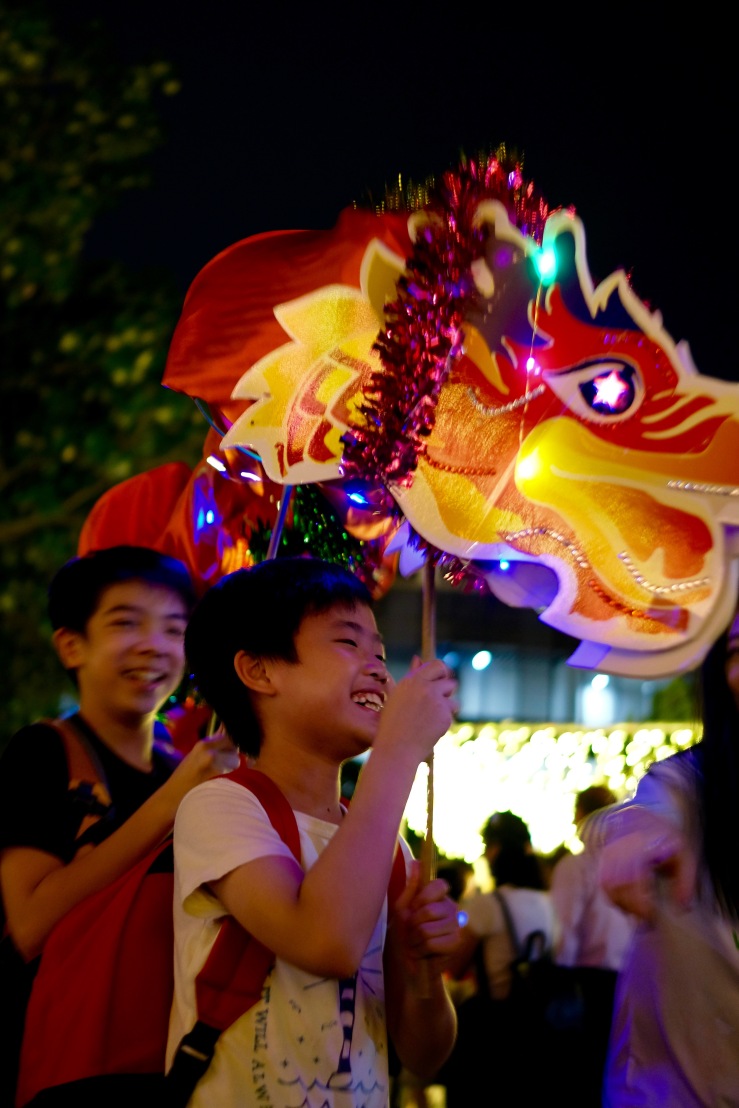 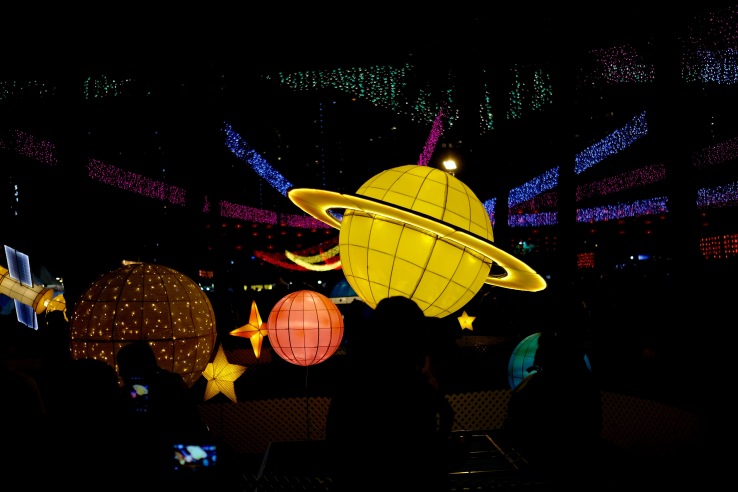 We’ve spent an hour looking around, and listening to a local high school orchestra. Now: we want some fire dragon.

We head back, weeding our way through the crowds trying to find a good viewpoint. We get right in front of the fireballs, the breath of the dragon, heating up.

In the distance, we can see the dragon getting ready. It’s an immense line of rope with bamboo poles for dragon trainers to hold on to. The scales are made of countless sticks of incense, giving the entire street a plume of smoke with little ashen raindrops. Finally, with a thunderous explosion of drums and cymbals, the dragon is lit and makes its move. 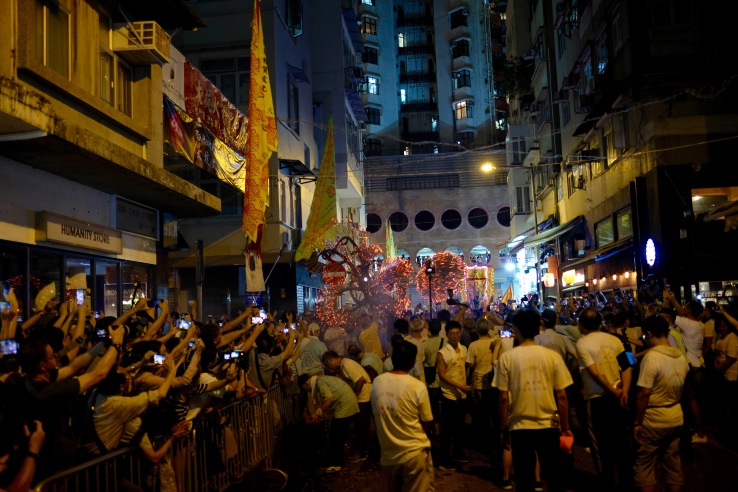 But we’re too far away to catch anything, so we head back and talk to the policeman for a while. They tell us where to stand, so we sit a while hoping to see the dragon.

But the policemen were wrong. We make our move back, pushing our way in and finally getting a proper viewpoint. Along the way, I see the prize of the night: suckling pig.

We get a spot right next to the action, just in time to watch the dragon molt a new skin of incense. 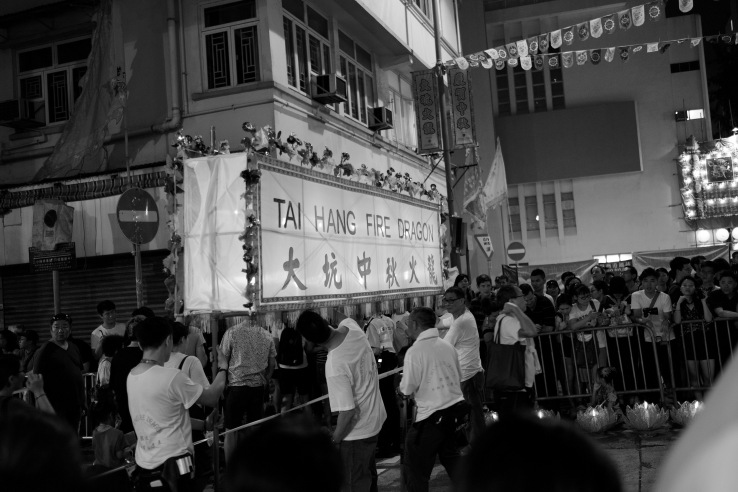 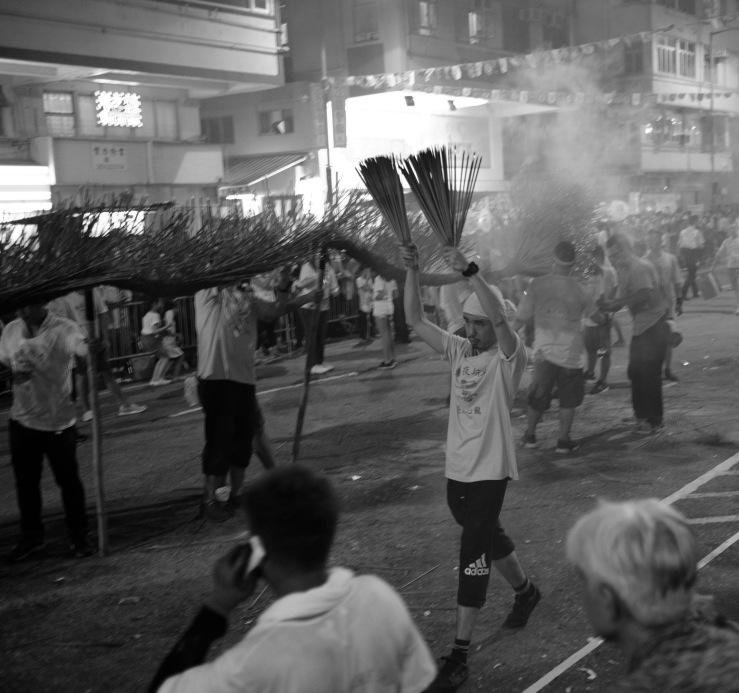 Just in an instant, the drums erupt again in an explosion of cheers from the crowd. A cloud of sweet incense rises, making it almost impossible to breathe, as the dragon swims through the air towards us. 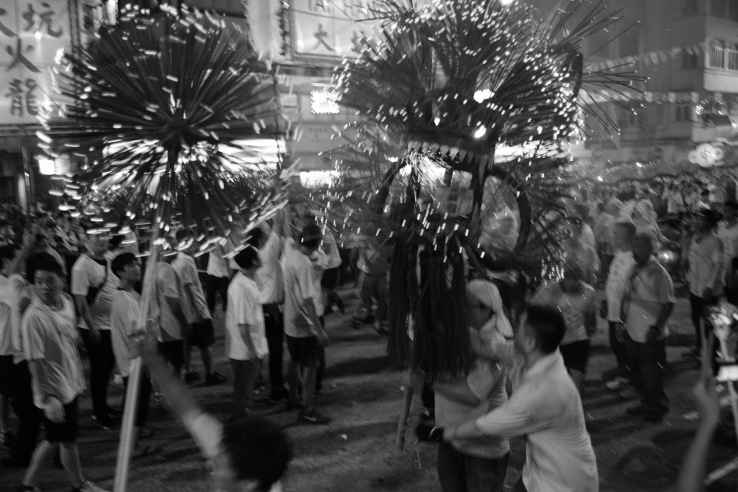 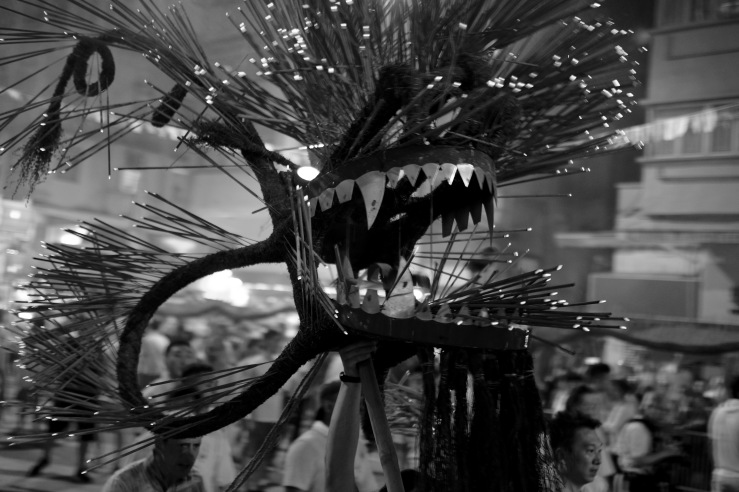 Shooting off breaths of fire and smoke, the dragon and its many handlers dance as one down the crowded street. 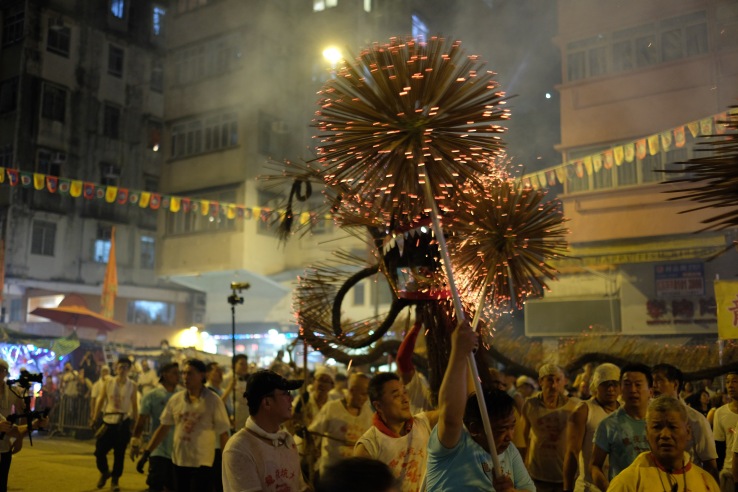 The dragon reminds me of the giant monster mouse from the movie American Tail. I hadn’t thought about that movie in years until I saw this thing and got a horrible flashback to that terrifying creation.

The people controlling the dragon are most interesting to me. There are a lot of expats, making me wonder how they got this gig. Whenever someone is tired, one of the dozens of volunteers steps in and takes their spot. It’s like clockwork, and miraculous to watch how smoothly it all runs. They’re all dripping with sweat, covered in ash and burn marks from fallen incense.

There are other dances, and school girls with little candles. Michael flashed an old journalist badge from a few years ago and got entrance into the event, and luckily got right up and personal with the dragon. I’m a little jealous, but I guess that’s one of the perks of the profession. 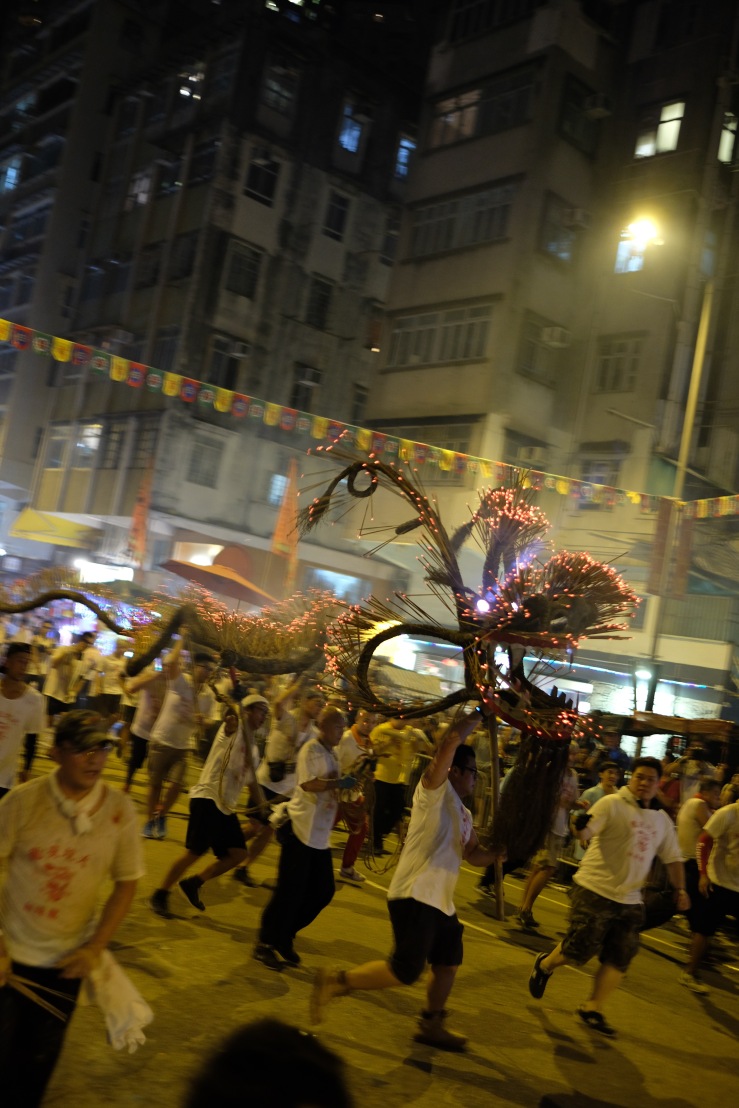 I’m covered in soot, but I’m happy. I feel like I’ve witnessed something truly special. The dragon makes its final dance, and recedes back to its cave. We follow it, to find a group of smiling and sweating dragon tamers, drinking beers and taking photos with the mystical head. 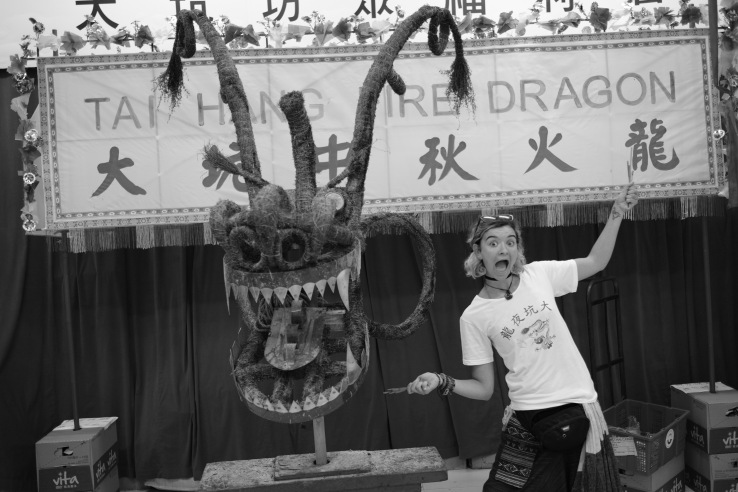 All that’s left to do now, is roast up that sweet little piggy.

A content creator and community manager for the Be My Eyes app, I use my free-time exploring new places and cultures. I have a knack for traveling on a budget and discovering new and amazing things, so join me as I discover everything the world has to offer. View all posts by weekend-rambler