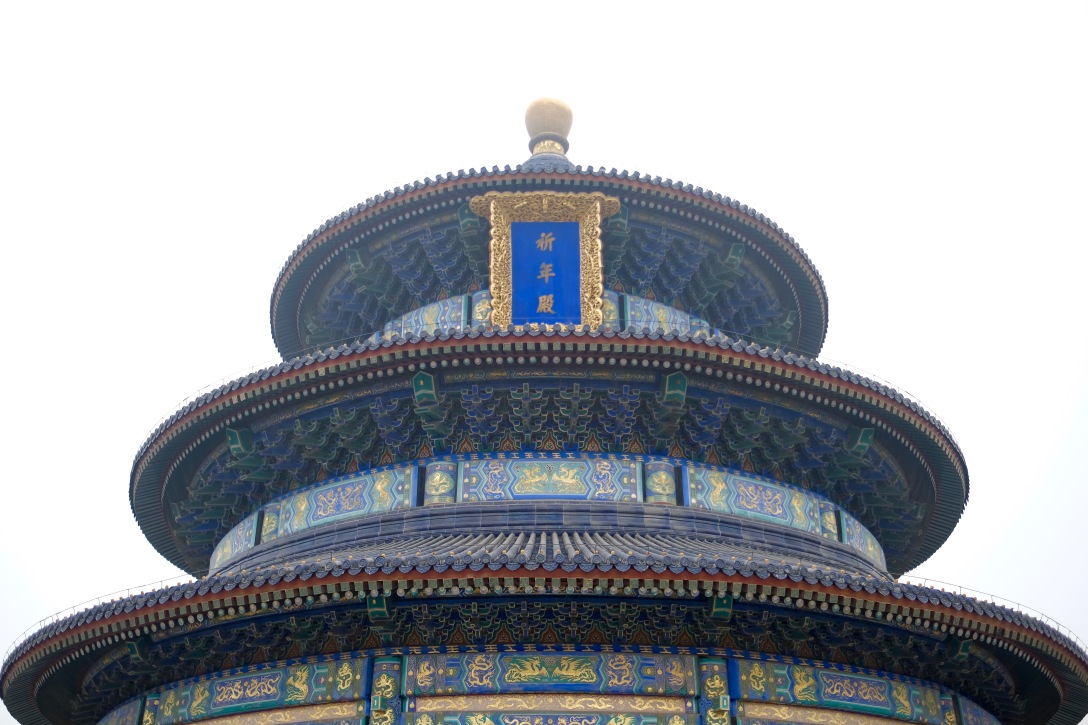 Beijing is dusty and hazy. If you open the weather app on your phone, it will probably show you the temperature and then under it say something like, “Partly Cloudy” or “Sunny”.

But in Beijing, it’s a bit different. 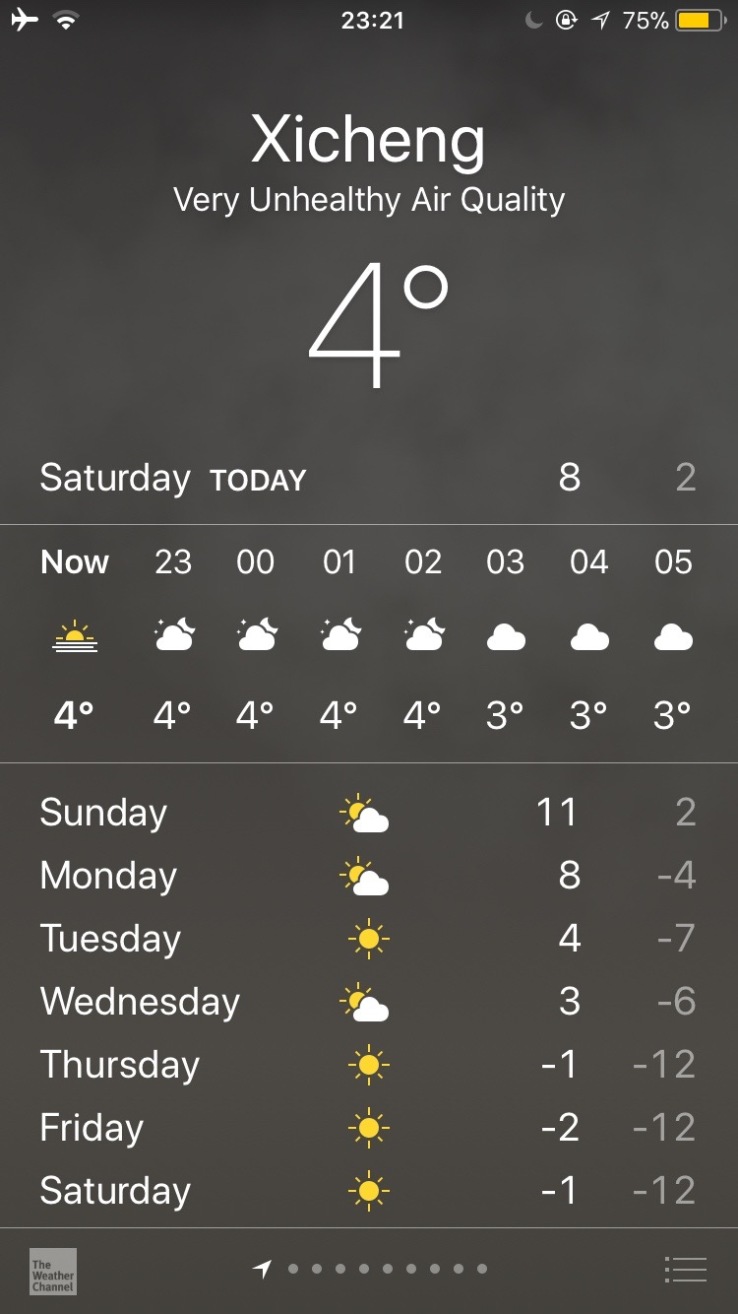 So with a “Very Unhealthy Air Quality” city ahead of me, I strapped on my face mask and enjoyed the wonderfully historic capital to the People’s Republic of China.

Beijing, along with a few other Chinese cities, has a visa-free entry scheme for the Weekend Rambler in all of us. One can enter for 24 or 144 hours (in other cities it is 72), as long as you have a ticket going to a different country than the one arrived from. For me, the cheapest option was to go fly to Seoul after, so I had two capitals to look forward to in my journey. Since Hong-Kong and Macau have different border controls, one could also fly from Hong Kong and fly back to Macau. 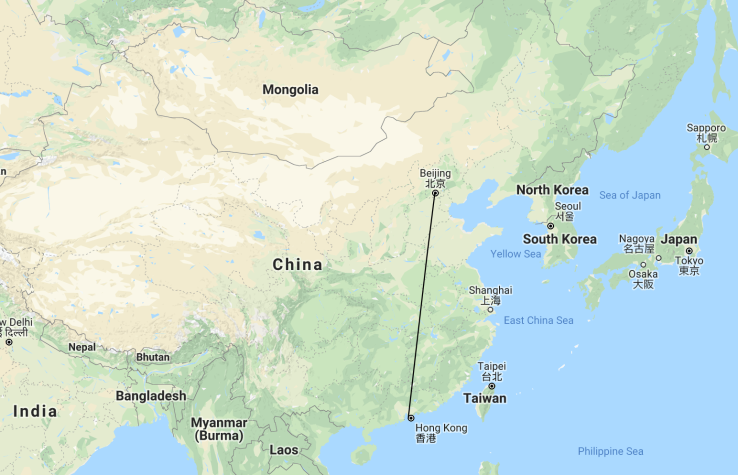 I arrived late in the evening and took a quick nap before seeing Tiananmen Square by night: which is the best way to see the gates to the Forbidden Palace without standing in line for an hour. 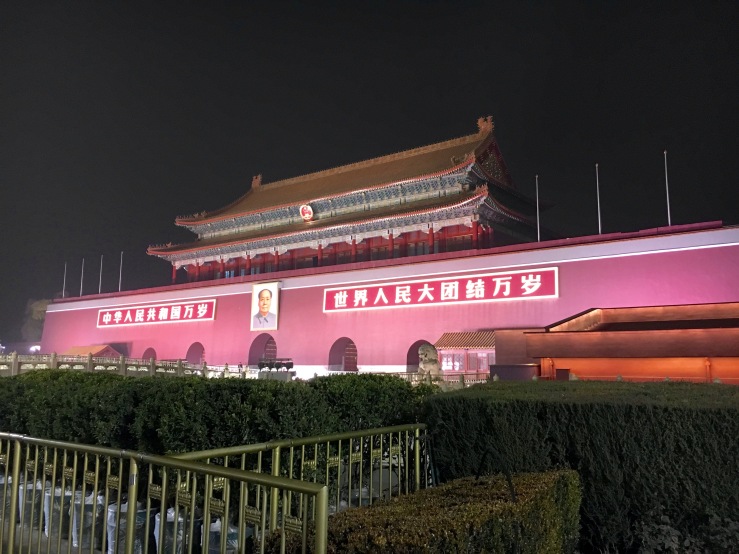 To get my live music fix, I went straight to School Live Bar, a local institution for the underground. It reminds me so much of my bar back in Aalborg, 1000Fryd, with its intimate stage and comically rude staff. When I asked for a ticket to the show, the worker said she didn’t have change. All she needed was a 20 Yuan note. I asked if the bar would make change, to which she shrugged and said, “Probably no.”

Alright, screw you too.

I left, deciding it wasn’t worth it. I walked a few blocks down, ready to go to another bar I heard had good music when I heard someone running up behind me. I turned around to see a panting young woman, one that was standing behind me in the ticket line, run up to me and through strained breath say “I have make change. You see show?” I guess that’s a sign from the universe to see the music. 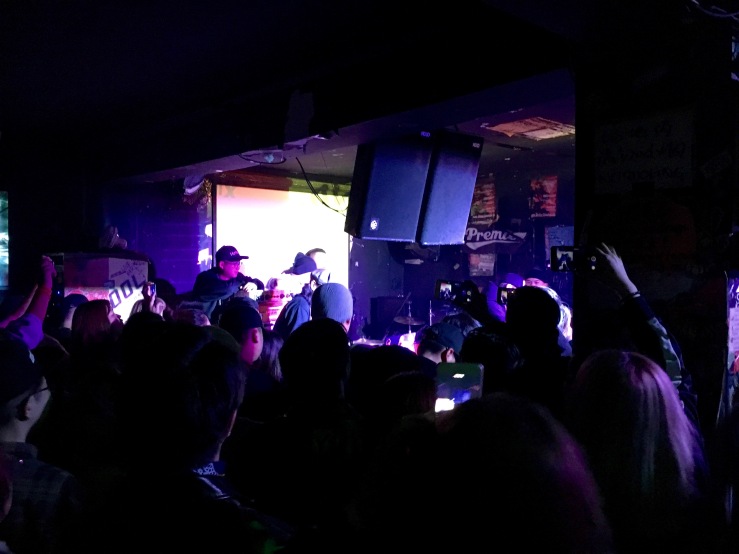 All local bands, some hard rock, and Chinese rap. All in all, it was a good vibe and I was one of only two or three Westerner’s in the bar that night.

For more underground music: head to Temple Bar near the Drum Tower part of town. Here, the beer is tasty and cheap and the venue is decently sized for a good show. The bartenders are much nicer as well.

For Tasty Beers: Go to Great Leap Brewing in the same neighborhood as Temple Bar. The Hutongs around Drum Tower are, in general, very nice to wander around. But this bar has great staff and wonderfully affordable and delicious craft beers. The perfect treatment for a cold Beijing night.

Alright enough about going out, let’s talk about Beijing’s culture. I liked Beijing, but not because of the things I usually like a place for. Its people are not as friendly as those in Brunei, and its food is not as good as it is in Thailand or Vietnam. The pollution also makes you wear one of these all the time. 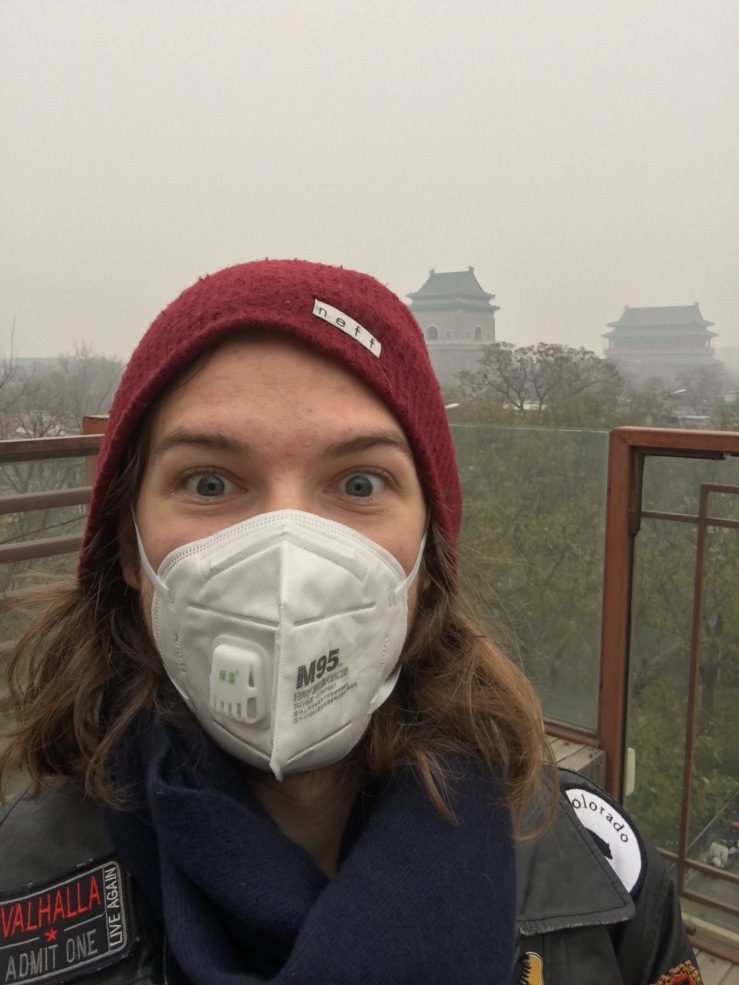 But wait: don’t arrest me yet, Chinese Government that is still monitoring my every movement! While the food (while still quite tasty) and air of Beijing are not its strong points, Beijing makes up for it in its decadence of culture and history. The amount of fantastic art, history, and culture in Beijing are perhaps only rivaled by Rome or Athens. This is China’s greatest bragging right, one far greater than adorable pandas, and one worth returning to China again to experience. My two and a half days were simply not enough to uncover every delicate and elegant part of Chinese history, but I tried to make the most out of my time.

While I did not go to the Summer Palace or the Forbidden Palace, I made an effort to see the Temple of Heaven. This was the main architectural attraction I had my sights on, and it absolutely provided everything I had hoped. 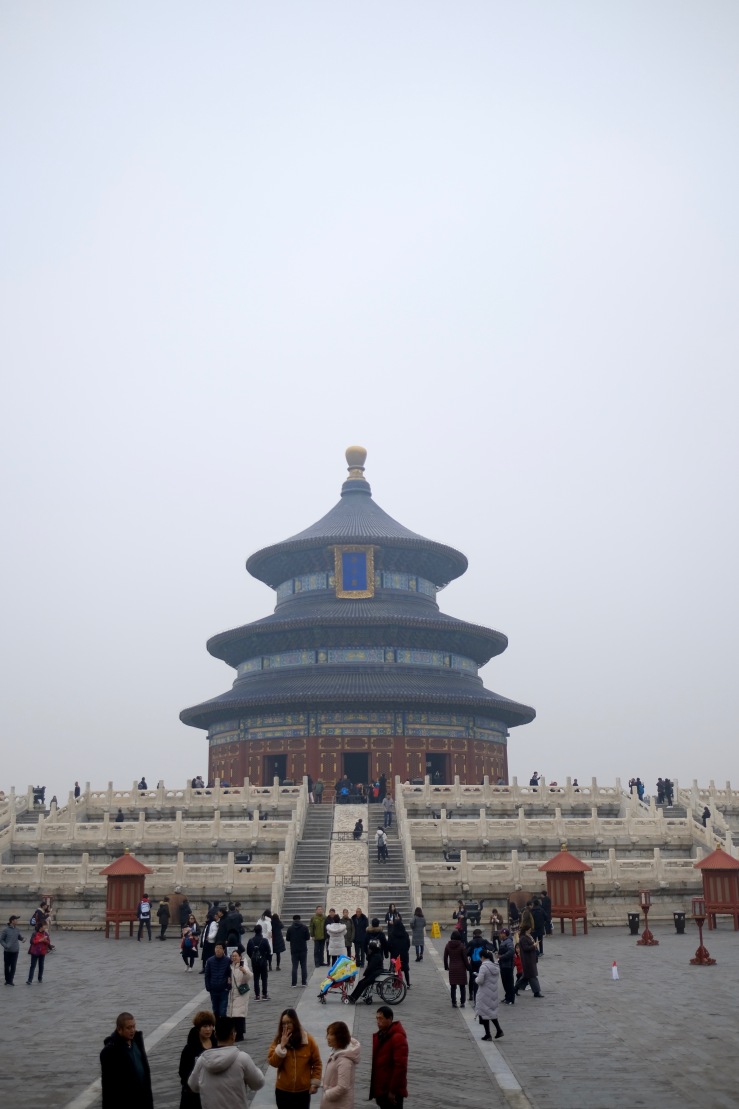 As well, December seems to be one of the better months to see Beijing, as the crowds are not monumentally large.

Along with the Temple of Heaven, I visited the Drum Tower to hear the ceremonial drumming. 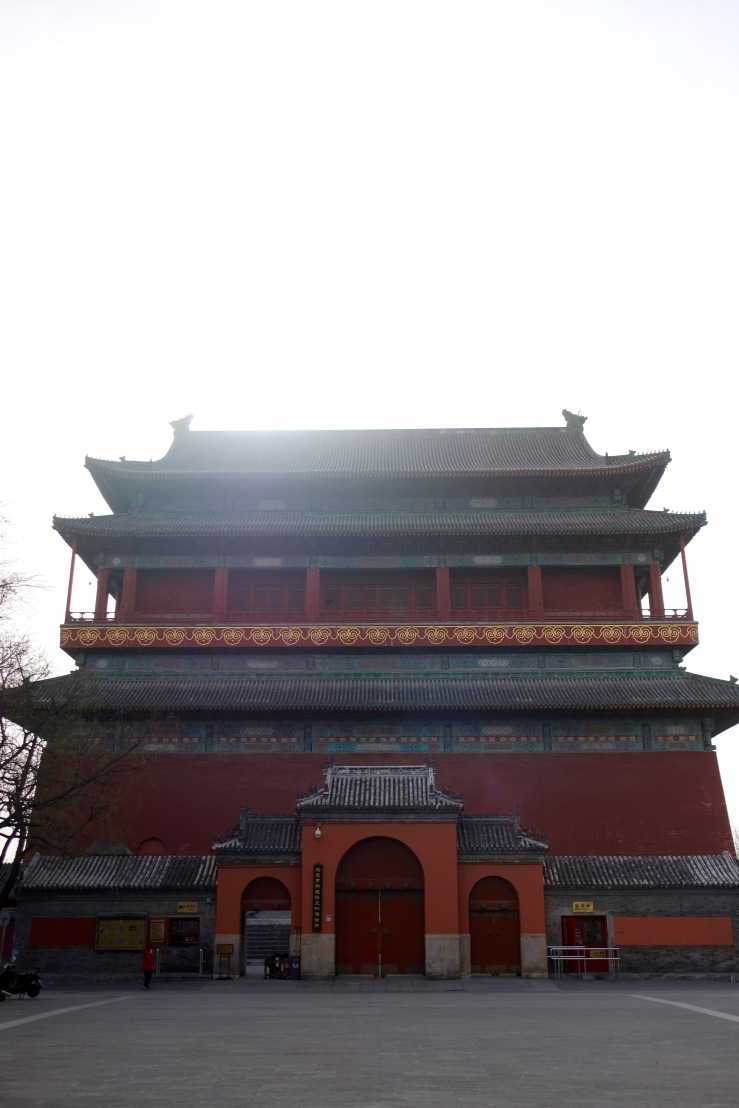 There is a piece of ancient history around every corner of Beijing, and this is one of its most impressive qualities.

To go a bit off the beaten path, I perused the stalls of Panjianyuan Market, a massive market of all things where one can find beads, communist paraphernalia, books, and antiques. There were hardly any tourists here when I went, and it felt like a pretty special experience to haggle over beads as my nose froze beneath my mask. 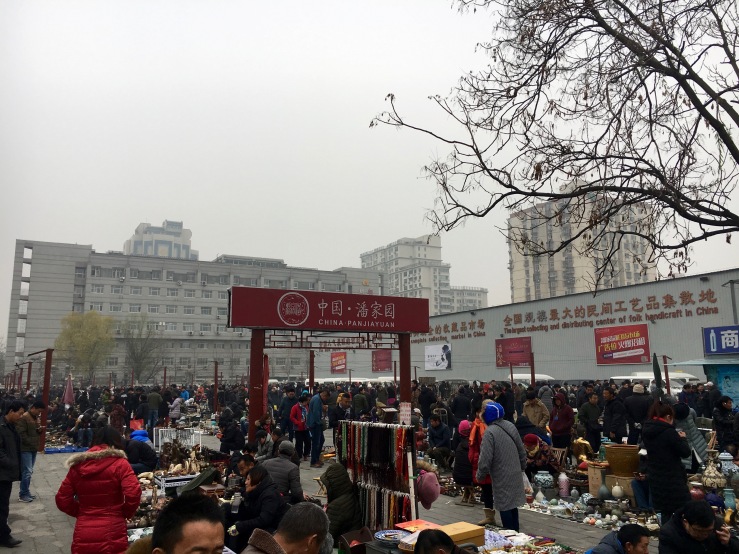 From here, I walked to the Fayuan Temple to miraculously see Sunday prayer with all of the locals. 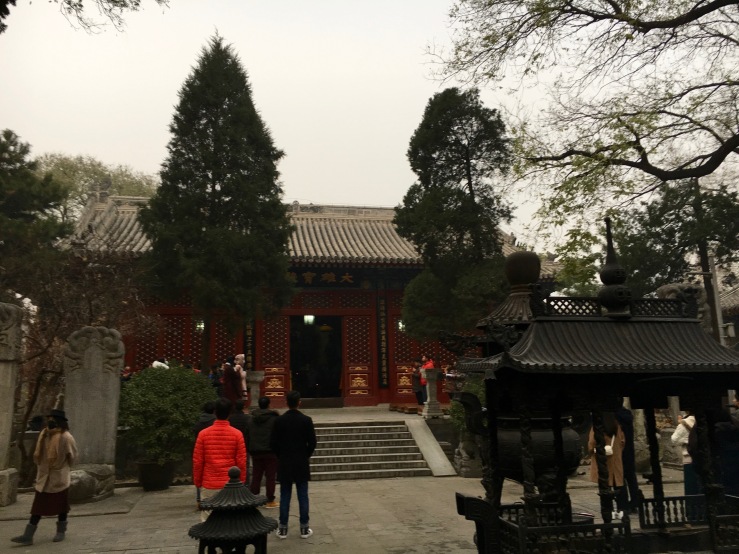 To complete my religious fix, I walked a few blocks West to the Niujie Mosque, one of the oldest and most influential mosques in Beijing. I grew curious about Chinese mosques after seeing a model of one at the Islamic Art Museum in Kuala Lumpur, as the minarets look nothing like the typical style in mosques everywhere else in the world. Instead, they use the standard Chinese architectural designs to create a unique and beautiful minaret to make the call to prayer. 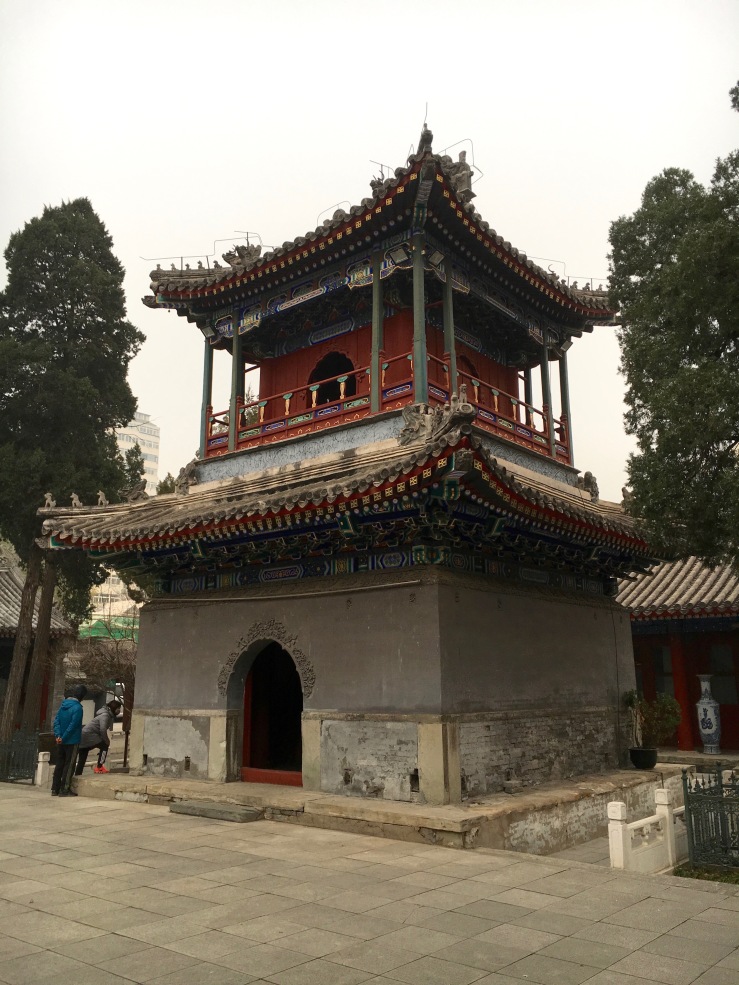 The neighborhood around the mosque was one of the most interesting parts of my time in Beijing. I can almost guarantee that I was the only tourist walking around this largely Muslim neighborhood, as the looks I got from the locals was one of puzzlement. It was beautiful, with lively markets selling yak milk and Halal meat like anywhere else along the Silk Road. The markets here are also much cleaner, particularly the butcher shops, which often gross me out in Hong Kong. For someone who has never stepped foot on the Silk Road, this was an especially unique moment of “where am I?”

Of course, one can not see Beijing without journeying to the Wall. I have never been enamored by the Great Wall. I never looked at photos of it thinking, “YES I must go here, and stand on that.” So I almost considered not going at all, as I could have used that time in one of Beijing’s many art museums. But after I read that Mao Zedong once said:

“He who has not been to the Great Wall is not a true man.”

I could not let Mao think this of me.

So I picked the most convenient way to get to the Wall, by train. For 7 Yuan, I took the S2 train about an hour and arrived at the Badaling section of the Wall, perhaps the most touristy part of the Wall.

But I was excited for the crowd. I wanted to see the mass of people, but there were not many there. Especially walking along the South side of the Wall, I had an entire section of the Wall to myself for reflection over this behemoth of a structure. I must say, it was extraordinarily impressive.

Just thinking about the work that went into this, thousands of years ago, on frigid days just like I experienced. It was absurd to be able to take it all in, and I feel privileged to have been able to experience such a monumental piece of history. I can’t believe I almost did not go.

Ain’t no Mongols getting in through there.

So I reassure you, Chinese Government reading my texts and emails, that you have a beautiful country with some of the richest history available on this little rock we call Earth. While I enjoyed your food and was lucky enough to meet some of your lovely citizens, your history was the thing that wowed me the most. Please do your best to preserve and cherish all the gifts you have been given, and we will always appreciate you for it. Thank you for allowing me into your borders, and for letting me experience your wonderful gifts to the world.

P.S. I read you are trying to remove all of the “Chinglish” before the 2022 Winter Olympics, so here’s what I found.

Nobody knows what a “Fried tickle” is, but it sounds pretty cute. 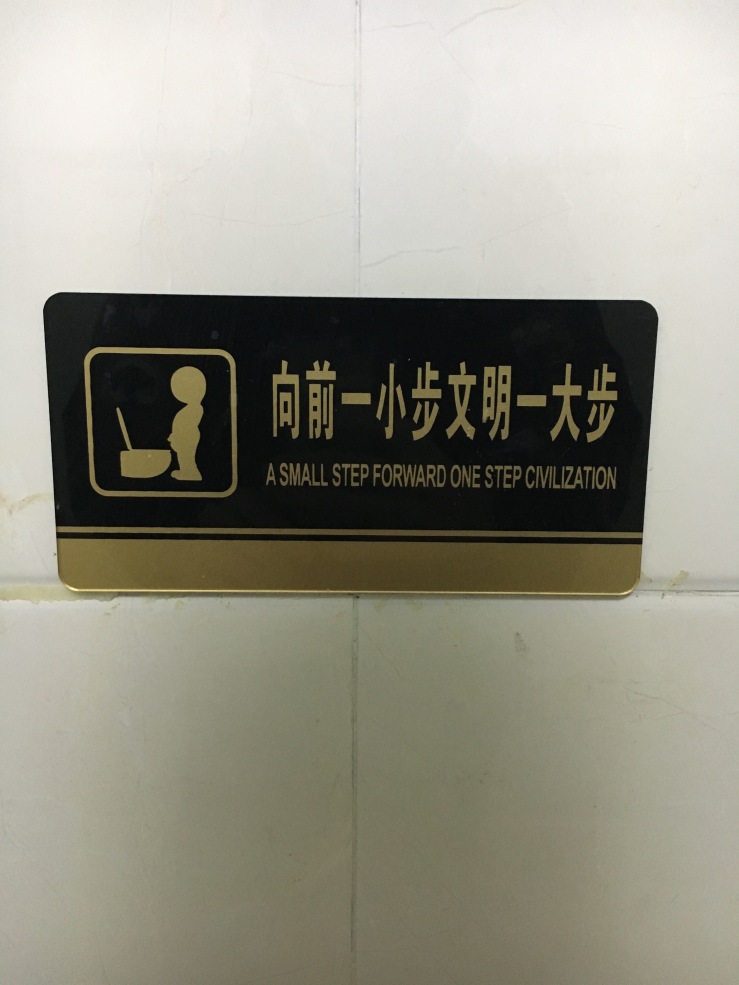 This one does not need editing, but I ask that you place these in every public bathroom in your country and in Hong-Kong, Macau, and Taiwan. Every single public bathroom I have used since moving here has been riddled in the floor peepee of your noble gentlemen. Please fix this. Thank you. 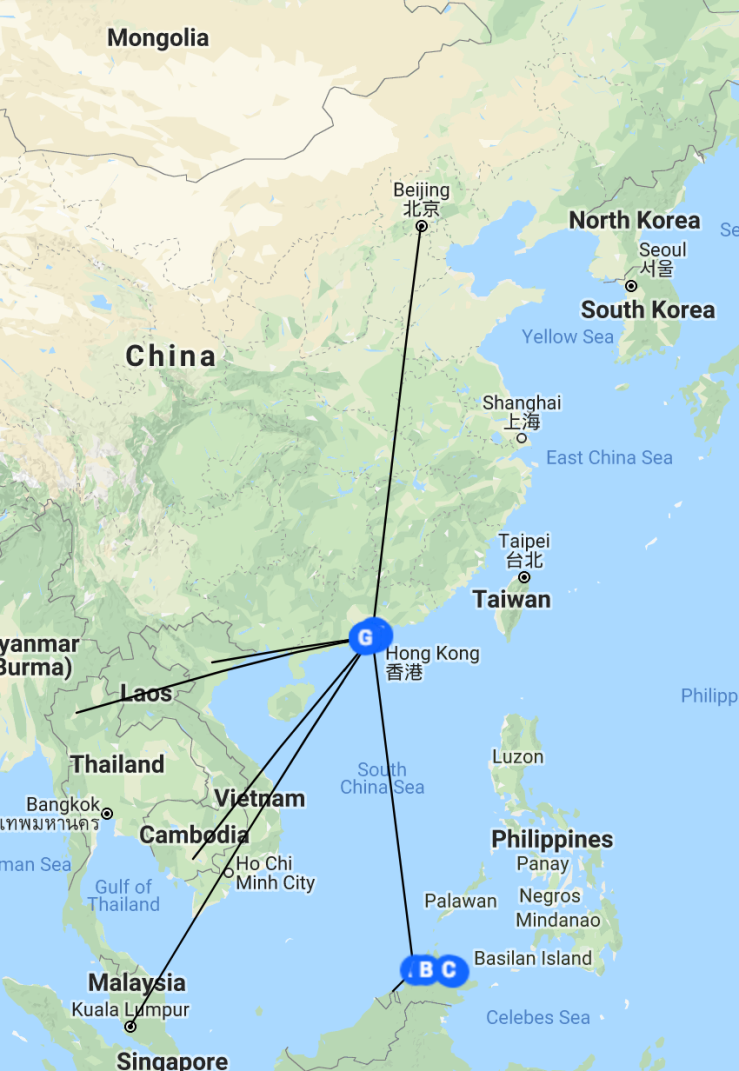 As always, thank you for taking your time to read this! Please like, and comment or contact me with any feedback for improvement you may have. Keep rambling!