Alright, I have been holding off the construction of this post for way too long. Yes, I had a thesis to write. But I won’t beat around the bush when I say Malta’s not my favorite, and I probably won’t be back. This is not because I did not enjoy Malta, but just because I feel that ten days was enough for me.

But is Malta a bad place to visit? Absolutely not. It’s a beautifully tiny Mediterranean island with a quirky culture and language all its own. The island is filled with stark sandy buildings, and it is nearly impossible to be too far from a stunning turquoise sea. You can’t go wrong with that mixture. However, Malta being a tiny sunny island in the Mediterranean, it attracts a lot of tourism. On an island of only around 95 sq miles (246 sq km), this makes for an island tighter than a Walmart parking lot on Black Friday. While the island is crowded, it offers some of the oldest buildings in human existence, along with a long beautiful history and some equally lovely locals.

So here, I will present my best alternatives to the usual Maltese beach holiday. Valletta is nearly unavoidable, as its a fantastic city to visit. Stay in Valletta for a day or two soaking up the tan streets and ornate Templar churches. Visit the old capital, Mdina, for a day trip to stroll through historic streets. After those two cities, hit the roads and get out in the country.

If you can, do rent a car. It’s fairly affordable and will make for a great adventure. Traffic is horrendous around Valletta, but out in the country, the roads are pretty nice and easy to navigate.

If a car rental is out of the option, the islands have an extensive and well-serviced bus route that can get you wherever you may need to go.

While I did not hitchhike, I have heard good things about Malta. The locals are friendly and most speak English, so hitchhiking will not be a problem.

Malta consists of three main islands. Malta is the biggest, followed by Gozo and little baby Comino. Malta is the most densely populated and touristic, but there are still spots where the rambling soul can beat the crowds.

South of Valletta along the coast sits two of the oldest buildings in human history, the temple ruins of Mnajdra and Ħaġar Qim. Both are protected by UNESCO, and thought to be built between 3600-3200 BCE. That’s a good 1000 years before the Pyramids of Giza and Stonehenge. Surprisingly, the temples were fairly devoid of tourists when I visited. All of the tourists were occupied in the streets of Valletta or on the sandy beaches, making time for curious beings to explore the oldest buildings in humanity.

Let me say, they alone are well worth coming to Malta for. The shape of the temples is oddly comforting and organic, and while only ruins remain it is still possible to feel the immensity of the temples that once loomed over these hills. Round shaped rooms and tall sandstone walls protect you from the heavy winds continually rolling over the treeless island. A somber and calm sense washes over those that enter, and one feels strangely at home in this alien environment. My photos can not capture the oddly womb-like feeling of being in these temples. But screw it, go see it for yourself.

This is a touristy one because it was on Game of Thrones or something. It’s a pretty cool grotto carved into the rocks from centuries of erosion and ocean. But it’s only a few kilometers away from the temple ruins, so why not stop by for a selfie and some fresh strawberries from an old man. This is also a popular spot for divers, who come to enjoy clear blue waters and exciting rock formations.

South East of Valletta is an old cave and ice age graveyard called Għar Dalam. Over the past century, skeletons from hundreds of ancient elephants, hippos, rhinos, and many more have been excavated. Not many people come here, but it’s pretty interesting to see the bones of an ancient baby pygmy elephant.

Combine this with a trip to Marsaxlokk, a fishing town popular with Maltese locals for the abundance of tasty restaurants. We visited on a weekday and the town was packed with locals dining al fresco by the coast. While you will not see many tourists, you will get an opportunity to listen to Malta’s endemic music genre, Għana.

It’s improvised and mostly screeched by drunk dads who just chowed down on half a tuna and can no longer control the volume of their voice. But, its a unique look at a type of music you certainly will not be listening to back home.

East of Marsaxlokk is St. Peter’s pool, a great little grotto dug from the sea into the smooth sandstone. It’s not necessarily off the beaten path, but there are some nice places to relax and get some sun next to the sea.

Head North to Marsascala, another fishing town along the coast which offers a much more laid back vibe to watch blue boats bob up and down over a coffee.

Homer described Gozo in The Odyssey as being the home of Calypso, the nymph who held Odysseus as a blissful sexually pleased hostage for fifteen years. Edward Lear, an English proponent of nonsense poetry and limericks described Gozo as “pomskizillious and gromphiberous”.

Your Weekend Rambler will describe Gozo as a picturesque Martian landscape to rent a house with a pool to get wine drunk and stuffed on delicious fresh goat cheese in.

A quick bypass of the North of Malta Island takes you to the ferry station in Ċirkewwa. Here, ferries for Gozo and Comino run on a pretty regular basis throughout the season. The ferry only takes about 20 minutes, and by the time you reach the other side in Gozo, you are in a completely different Malta. Fewer tourists, less packed, and a much larger expanse of farmland rather than the cityscape. Gozo is the place to be for the tourist that needs a break. Gozo is definitely best explored by car, as the roads are a lot more choppy and rural.

One can explore the little towns of Xlendi, Marsalforn, and Victoria for a taste of civilization.

Another stop worth taking is the ruin of Ġgantija, another temple dating back to 3600 BCE. The temple is much like those on Malta Island, but the surroundings are more pastoral. The views of the vast green countryside from the temple are also worth the experience.

Nature wise, there are salt pans up North where locals have been harvesting sea salt for centuries.

The Azure Window, which was also in Game of Thrones, has unfortunately collapsed. But there is still a lot of unspoiled coastlines worth exploring. Another spot worth stopping for a walk is near the cliffs of Ta’ Cenc, a vast expanse of beautiful sandstone cliffs hanging above the cyan abiss. 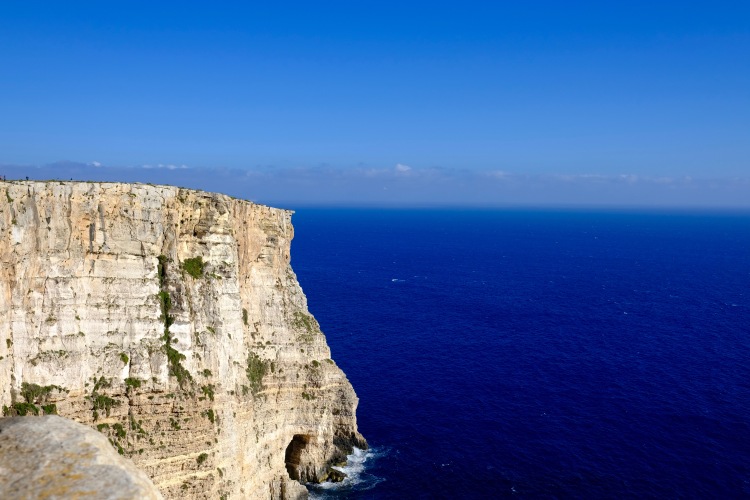 At the end of the day, Gozo is really the best place to unwind and read a book with the beverage of your choice. It is well worth a few days of quiet and (relatively) tourist free exploration.

The Maltese are a quirky bunch of Meditteraneans. They have had to serve under tourists for centuries. Since Minoan and Peloponnesian traders used its ports to trade a nifty new metal called ‘Bronze’. They have been ruled by angry looking celibate Knights who were kicked out of Jerusalem after the crusades. They have seen tourists since Malta became a stop on the Grand Tour of Europe back when the Bourgeoisie were painting blurry pictures of lakes in Paris and smoking Opium from ivory pipes. They have lived under the rule of the British and taken many a siege from the enemies of the Crown. This being the case, the locals are weathered and adapted to visitors from all walks of life. Many are fluent in English, and all can offer a helpful smile with whatever question you may throw at them.

While waiting in line for the ferry, I unknowingly yet rudely cut in front of the car behind me in a bout of confusion (the signs didn’t make any sense). The woman in the car behind me jumped out of her car, and my mind imagined her taking out a hammer and blowing out my window, dragging me out of the car by my ear and throwing me into the turquoise sea. Instead, she knocked on my window and sternly advised me to “please, wait your turn in the queue next time” before returning to her car. Such politeness from my horrendous etiquette.

Malta is a weird island with a culture and language that is still trying to define itself. It is well worth the visit for its sunny coasts, ancient temples, and lovely people. It is also a country which can be experienced quite sufficiently in about two weeks. Malta is crowded and hot, but there is a lot to do off-the-beaten path, and I hope you will be able to enjoy it.

Thank you all for reading, as always. I apologize for posting this so late, as I was just finalizing my degree. Now that I am a full graduate, I hope to be sending out new great content as soon as possible! Please like and subscribe, and leave a comment with whatever feedback you gorgeous humans are feeling.